If you are looking for a platformer for your PSVR than Bound may be the game you have been looking for.  Originally released for non VR play, the additional mode has turned this nice looking game into a breath taking VR experience and its use of classic platforming mechanics may fill a gap in your VR library. 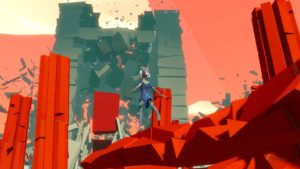 At times there is a lot happening around you!

The tale set before you is anything but traditional.  The game is the manifestation of a pregnant woman’s internal struggles as she faces an unknown future possibly marred by events in her past.  If that sounds a bit heavy, that’s because it is.  That gameplay itself is a little more traditional, though the visuals and even the way your avatar moves is anything but.  Your movements are based on those of a ballerina so fluidity in your motions is both beautiful and sometimes a little awkward when translated to a game.  Jumps, rolls and that tippy toe dancing are here as well as the use of trailing ribbons which act as your defence against the unknown enemies destroying the world around you.  It controls like a standard 3D platformer, but with it’s own unique twists.

The visuals are something you may have experienced on some of the more artsy and mellow games on the Gear VR but amped up to 11!  For the most part the surroundings and characters around you are comprised of different sized shapes all meshed together to form an awe inspiring world.  The ocean around you comprises of cubes that sway and move at their own will and in rhythm with your movements.  Stages use monotone colors and simplistic shapes and merge them together to create grand levels with some very large scale objects and characters.  As far as visuals go this is something to behold!

Need some ear candy?! This game has that too with a wide variety of tracks from classic inspired piano pieces to 80’s synth and other more melodic pieces.  All of them serve the game and narrative perfectly and help set the mood for whatever events are to come.

My biggest problem with Bound is the camera controls.  The camera is mapped to the right joystick so while you have “full” control of the camera, it’s limited to 45° jumps and you have to constantly adjust the camera as it stays still no matter where you are.  This makes for some very cinematic moments, but also hinders gameplay as well, especially when the camera position is super close, at a bad angle or even in the environment.  As I progressed I did get used to the camera controls, but it never felt truly comfortable and did hamper the game.  Latter levels seemed to suffer a lot more with more dynamic levels forcing for more camera adjustments.

Levels are comprised of platforming tropes like climbing,  jumping, wall jumping and defending yourself from a few enemies.  Stitching these levels together are some still life scenes that come together as you walk around them.  These scenes are a glimpse into the protagonist’s past and serve to link the levels together as well as elaborates on the pregnant woman’s internal struggles.  Between levels are short scenes with more realistic visuals where you control the woman as she walks on a beach and views her scrap book, which chooses the next stage.  These are thankfully short and serve only to push the story forward. 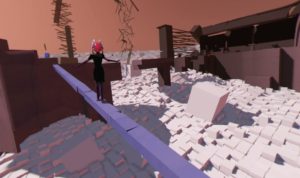 Pictures really don’t do the visuals justice, it’s too bad the gameplay couldn’t keep up!

Bound can be completed in roughly 5 hours or so, which just seemed a little to long.  Each stage is a page out of the woman’s sketch book though you would be hard pressed to see the difference between them other than story progression.  The further I progressed, the more I just lost interest in the story…it just plays on way too long. Camera controls aside, everything here works  though i did struggle with the jumping mechanics, often falling to my doom and forcing a restart at the last checkpoint.

This is worth playing, but it’s not without its missteps. What could be an amazing experience is hampered by camera controls and an emotionally heavy story that just takes too long to resolve.  Completing the game unlocks a speedrun mode and scoreboard tracker but given the games shortcomings I was definitely one-and-done with this experience.

What would I pay?  $15US is a more appropriate price.  The game offers a lot of content, it just plays on too long and can’t really decide if it wants to be a platformer or more of a narrative tale and because it walks that line, both sides suffer.