“Blind is a narrative-driven psychological thriller for virtual reality where the player cannot see and must explore their surroundings using echolocation.”  We have seen a similar mechanic used in the 2017 VR game Stifled, which had the player confronting past turmoil’s through some intense reality twisting stages.  Blind goes for a more traditional puzzle solving root with you playing as young woman who wakes up after a car accident, stuck in a large house run by The Warden, a figure who apparently has the woman’s best interests in mind, but puts her to task with puzzle after puzzle that forces her to reflect upon her past. 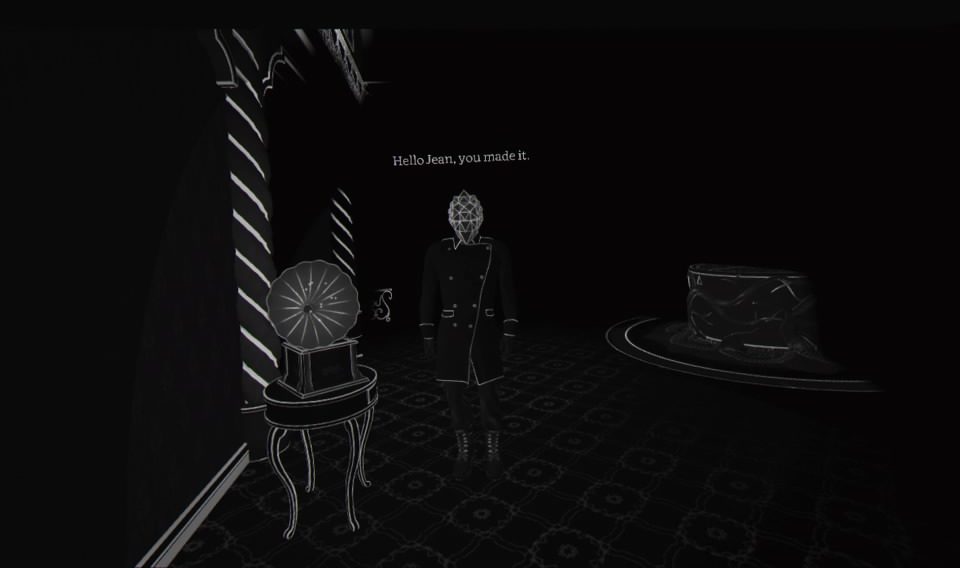 Meet the Warden..he’s a dick.

The major puzzle mechanics in Blind are grabbing and manipulating objects so you would think Move controllers would be the best option, and they are alright, but I much preferred using the DS4.   Most puzzles get relegated to using the thumb sticks or head tracking to solve them and I found it way easier to do as the tracking and required hand movements with the Moves didn’t always jive…plus I really disliked the button placement on the Move controls as I was constantly hitting the wrong button trying to find my way around the house due to the unique button layout.  This basically controls like any walking simulator save the sound mechanic, which is the crux of the game.  You need sound to navigate otherwise all you see is darkness and thankfully very early on you are given a cane that you can tap at anytime with varying degrees of pressure to basically light up the room though to many taps in a row can light the scenery up to much causing temporary blindness.  Puzzles come in a wide variety ranging from simple item placement to manipulating valves or just listening for clues to find a solution.  Every puzzle utilizes sound mechanics in some form or another and the game deserves credit for keeping each successive puzzle feeling fresh.

Almost the entire game is black or white with a little gray-scale thrown in for specific items and characters.  The world around you is pitch black and every time you, or anything else, makes a noise the world around that noise lights up, outlining any edges in white.  Gears turning beneath the floor or pipes filling with water behind a wall can all be seen thanks to the sound they put out.  As the echo fades, so too do the white lines so you will constantly need to make noise to navigate or even just look around.  Flashbacks are told with still, life-sized models that are fully narrated and have a foggy sheen about them, separating them from the game visuals, though it’s a clear, shortcuts were made in these and other character models, who’s mouths don’t move while they talk. 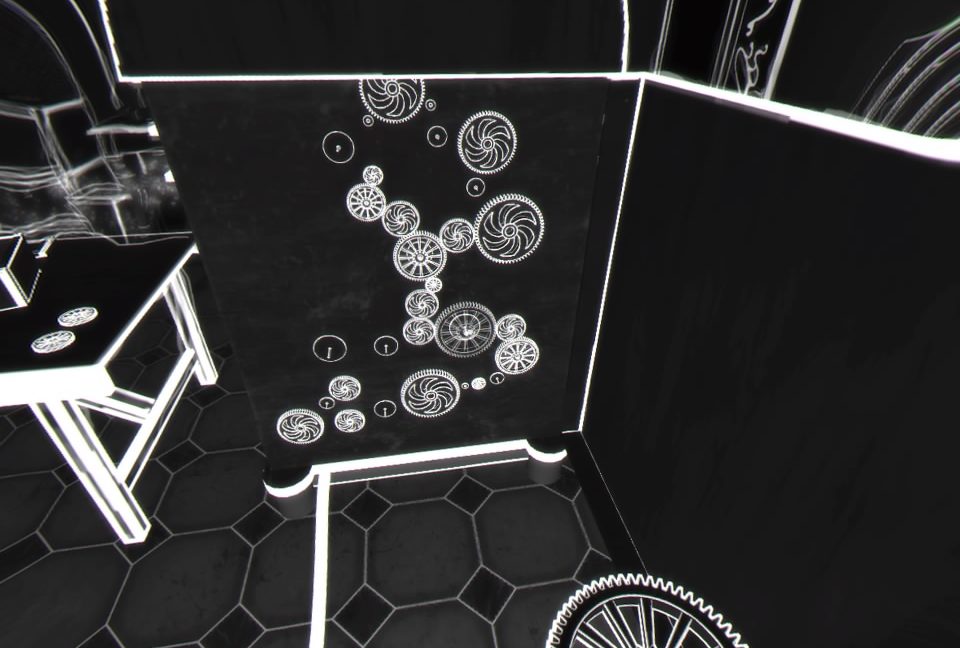 The puzzles are fun!

With the visuals taking a backseat in Blind, the audio is relied upon a lot more heavily to do just about everything in the game.  Every puzzle uses audio in a unique way so while some may be simple, like just listening to an audio tape for a clue, others get more complicated with you having to find the right order to a song or cut off the flow of water in pipes by placing valves at specific junctions.  Just standing still might reveal a subtle sound that will lead you to the solution you may be currently seeking and as the game progresses you will find yourself relying more and more upon your auditory senses so make sure you play with headphones!

Blind’s central story is a around an accident involving Jean and her younger brother Scott.  Waking up after the car crash, Jean finds herself locked in the house by the Warden, a figure who wears a helmet laden with pyramids (Pyramid head?!) who apparently has Jean’s best interests in mind.  He subjects you to puzzle after puzzle all while having you confront the demons of your past and realizing exactly why you are in your current predicament.  The more hands-on puzzles will take you through the 1st half of the game, with the latter focusing a lot more upon the story and some more intense, actiony/stealth bits.  I really enjoyed the puzzles here and thought they were overall clever and fun.  The story does get pretty ‘heavy’ with her younger brother’s chronic health issues and the family dynamic before the accident took place and as the story unfolds, some very serious problems from Jean’s past are brought to light…so to speak. 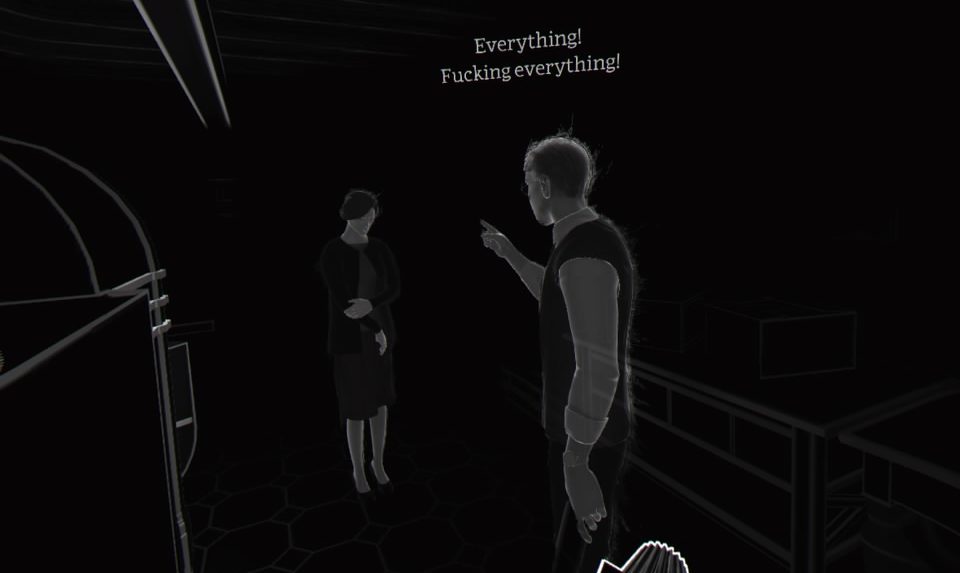 Warning, foul language is present in this one!

While I did enjoy Blind’s puzzles, other issues did get in the way of my fun.  The major being the reliance on sound, or rather your inability to produce your own sounds.  A mechanic that this is missing that Stifled had is the ability to make your own noise courtesy of the mic built into the VR headset.  It feels incredibly weird to have everything around you make a noise, lighting up the surrounding area, but you don’t make a peep.  You have no body nor do your footsteps provide any sound leaving you to give the floor a whack with your stick if you have it, or constantly look for items to throw so you can see ahead.  If the game was constantly moving you forward, this would be less of an issue, but on many occasions, I was just staring at a puzzle trying to figure out the solution, only to constantly need to hit the stick button before the world dimmed around me.  The pacing in the story is also a little off with me being every intrigued at the onset and being way less then interested by the time the I reached the dramatic conclusion.  It’s not bad per se, but the story does get very heavy and dark and might just not appeal to everyone.  Don’t get me wrong, it’s not a bad story at all, but just one that for me lost steam as the game wore on. 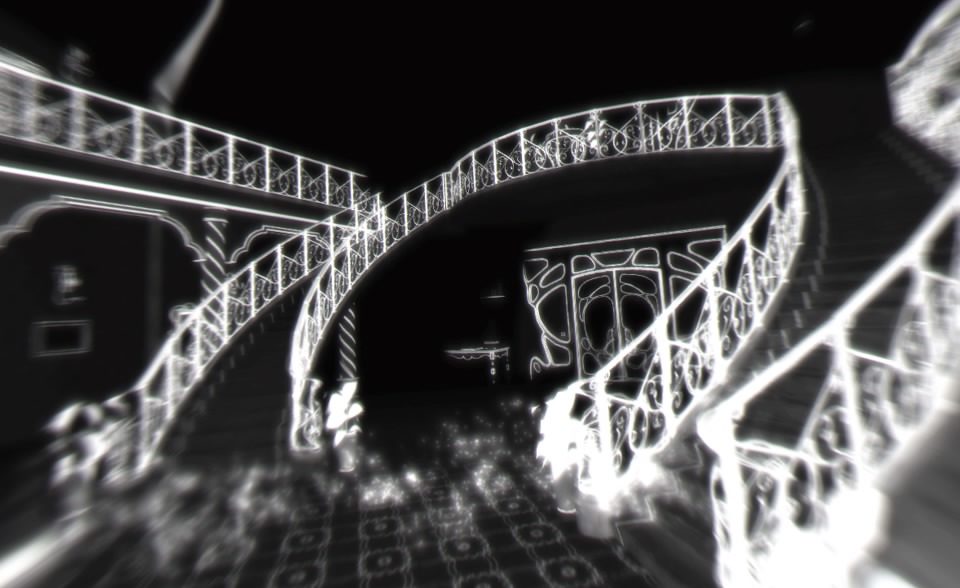 Tap your stick to light everything up!

Blind for the most part is a solid puzzle-centric title that utilizes the isolation of playing VR that tends to give most people.  I enjoyed the puzzles and the way the story was told and by the time I had reached the dramatic conclusion, I was satisfied with the overall gameplay.  It’s not perfect by any stretch, but for those looking for another puzzler in VR, this should scratch that itch nicely.

What would I pay? $25 is alright for this if you are clamouring for a VR puzzler but does seem a tad high considering the total package.  I’d be much happier with a $20 price tag for Blind, but like I said, overall, it’s a pretty solid experience.

Suprise Attack PTY provided The VR Grid with a code for this title and, regardless of this review, we thank them for that!