Have you ever wanted to tend bar…but really hate people?  Well then does VR Factory have a game for you!  Now you can experience all the joy of mixing a variety of drinks for no one in particular for no pay and the risk of failure ever looming!  That just about sums up Bartender VR Simulator, but let’s dive a little deeper, shall we? 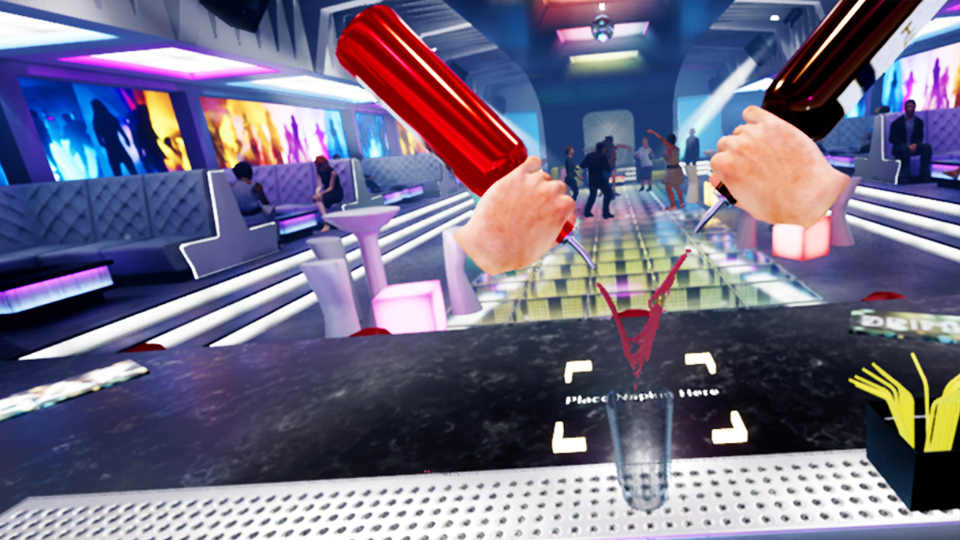 It’s time to get mixing!

It has ‘simulator’ in the name so you’ll be using your hands in this one as Move controllers are your only control option.  You are placed in front of a bar with a variety of drink ingredients spread out before, which do differ up a little between the 4 stages.  Each stage has 3 modes.  Practice teaches you step by step how to make all 4 drinks in that setting.  Challenge mode tasks you with making the most drinks in 10 minutes and free mode lets you make whatever you want without any fear of failure.  The 4 stages are all available to play at the games onset but challenge modes are locked  until you beat the previous stages challenge.   When you need to make a drink, the game just puts it in front of you and says make this, whereupon you’ll have to place a napkin on the bar, then grab your cup and make that drink.  You’ll have to add ice, cola, all manor of alcohol and garnishes with later stages requiring you to stir the drink, or shake it up in a mixer for some smooth martini’s.  Your score is given to you in dollar amounts with you losing points based upon over or under pouring, flare and the speed at which you make your drink.  If you do anything out of order, spill to much or break anything, that drink is an insta-fail and you need to start over or move on.

Bartender does not look good.  It doesn’t look awful but takes to many shortcuts in the visual department making for a washed out mess.  Everything is pixelated and grainy, even the bar in front of you and your ingredients.  Often times I had to hold a bottle up to my face to read the label until I memorized their position in front of me.  The 4 settings range from a night club, uppity bar, beach and roof top and all are littered with people repeating the same animations over and over.  That’s not to bad of thing as you’ll be to focused on the drinks to notice them anyway, but when you take a second or 2 to look around and realize the models repeat themselves often and lack any kind of facial features, it feels like you are in a simulation…and not a good one.  The liquids all have real-world physics, but the gravity at play is off with things being bit floaty, or just flying away should whatever you drop not like what it hit.  The drinks are clearly the focus and would look good, save for those washed out visual which make everything a little hard to look at. 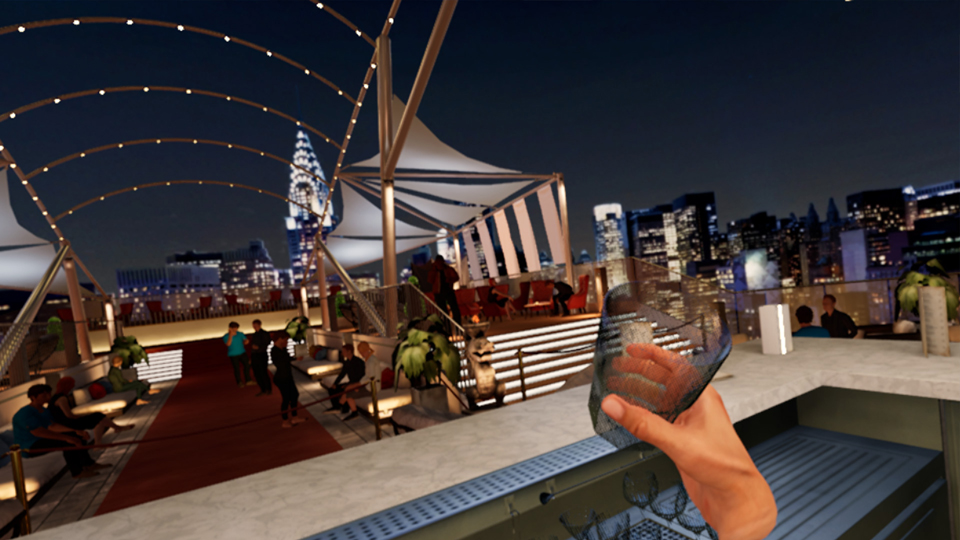 Each stage adds a little audio atmosphere whether it be the generic song in the nightclub,  the sounds of the beach or the easy-listening tunes in the higher-class locations.  The music in here is alright but the given how much time you might spend in a single stage, the one looping track in each stage (minus the beach) does get a little grating after not too long.  Your English-accented bodiless host explains the steps to make each drink and should you need hints, is also there to tell you what to do next though using these will also cost you points.

The driving force to “beat” the game is to play through all the challenge modes and unlock ‘Pro’ mode and, I’m not going to lie, I have no idea what that mode is and I don’t care.  Mixing and making the drinks is fine enough, but fighting with physics is frustrating.  The first step to many drinks is to scoop ice and pour it into your cup, but for some reason, I’m assuming to make it seem authentic, your scooper gets caught in the ice for a brief moment causing ice to go everywhere and forcing you to try again at slower pace.  Dropping anything is insta-fail, doing anything out of order; fail, to much or too little drink; fail and that’s all fine as this is a true to life simulator, what’s not fine is that it’s just frustrating and boring.  The whole point of this game is to get better at  making drinks and doing so with flare, which is laughable as the physics, when combined with the tracking, makes even just tossing something from left to right hand near impossible.  I often performed the the next proper step and was told I failed, I lost my ice scooper forcing me to restart the stage, my screen went black once, forcing a game restart and the speed and accuracy required to pass the challenges is no fun.  Between every failed drink, the game would attempt to recalibrate my position, putting me to far away from the bar, forcing me to move to close to the camera, losing tracking,  or calibrate far away, then walk forward to be in the proper position, only to repeat that process every time I had to make a new drink and only adding to an already frustrating experience. 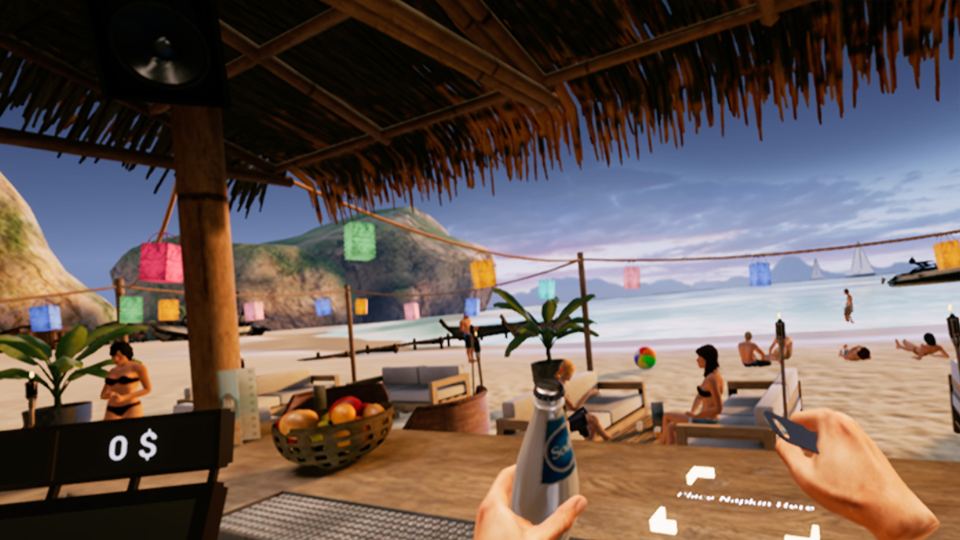 Sitting on a beach full of faceless clones has never been more…unnerving.

This isn’t even a game, it’s a training simulation for a bartender, and not a very good one.  Sure, memorizing those drinks and getting through the challenge modes is possible, but when you are constantly fighting the game to get there, what’s the point?  Any kind of attempt at flare ends up with broken bottles and a fail.  You can practice more and more, but it’s just making the same drinks over and over until you have them memorized so you can make the same drinks over and over to get a high score so you can make more drinks over and over.  For all intents and purposes, this is the Crisis VRigade of the Job Sim genre, only with a ton of added jank, and the only reason to play this is because you hate YouTube and probably yourself a little bit.

What would I pay?  For $5 this is good for a laugh, but as a serious game or simulation, it fails to entertain for more then a few minutes and asks much more of you then that.  If you want to learn how to tend bar, watch a video because this isn’t going to help at all except to teach you 16 drink recipes and force you to make them until you hate yourself.