Bandit Six was first released for the Gear VR a while ago now and was one of the first titles available for the platform. It was a technology in its infancy and a very simple, fun concept. It was an ideal piece of software to test the VR waters and for first time developers to experiment with the medium. Nearly a few years later and Bandit Six has been released for the PSVR and along with the original game, also included with the package is the sequel Bandit Six: Salvo. 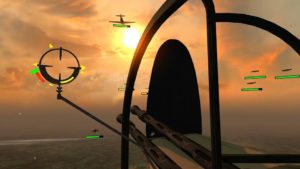 Take in in the beautiful sunset while fending for your life.

The first Bandit Six puts you behind the cockpit of a World War 2 fighter plane as a tail gunner. The game mechanics play very much like Gunjack, as in turning your head to locate and target enemies within your guns’ sights and attempt to shoot them down, just substitute Gunjack’s space theme for Bandit Six’s sunny blue skies.

As explained above the action is straightforward as waves of enemy planes come at you from all angles, but rather than simply release all guns blazing, the player must evaluate the various threats as to their priority and concentrate on them first. Along with this, just holding your finger on the trigger will soon overheat your guns and precious seconds will be lost and you become a sitting duck while waiting for them to cool down.

The game is divided into a campaign of sections and each section has its own requirement to pass the level and receive the rewards. These range from shooting down a set number of enemies to defending an ally. You are then awarded up to three stars for your accumulating amount. To unlock additional levels and progress, you will need to accumulate a set number of stars. As you play you will earn coins which are used to upgrade your fighter plane with better weapons. These will make the replay of earlier missions critical as your increased fire power should award you more stars than on previous attempts. This tactic is vital towards the latter stages of the campaign as the star criteria to progress gets ever stricter. This does ensure that previous missions are revisited and prolongs gameplay but not at the expense of feeling like it becomes a chore.

As a game for the Gear VR, the visuals aren’t anything spectacular but do the job with the whole game being well presented with the character to match. From what I can deduce, nothing has been changed from the Gear VR version apart from slightly crisper graphics. It’s fun and enjoyable where it counts and this scores highly in that department, mainly due to the smooth feeling of head movement, varied mission objectives and non-stop action.

The developer, Climax Studios has included Bandit Six: Salvo into the mix and once again offers the same enjoyable World War 2 setting but with a few differences. Firstly, the graphic art style has radically changed to a more cartoony cel shaded visual affair.  Although it takes away the realism, it’s colorful and bold and you soon realize that the original game is very stark and lifeless in comparison, but this is something you will either like or dislike. They do seem quite flat in a 2D way also, lacking the depth of a pure 3D title, which is disappointing. 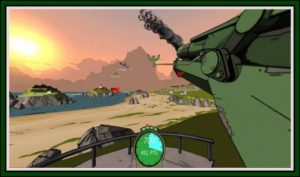 Defend the beach in Salvo!

Instead of manning the guns of a fighter bomber, here you are in control of a selection of gun turrets on the ground. A fair bit of strategy is needed as prior to the action you need to place the turrets in a variety of locations to maximize your area of firepower. Again, you earn money to buy enhancements for your turrets and these included cooling down upgrades to improved damage.

The gameplay offered here is far more hectic as you frantically try and defend your location from an assortment of planes, tanks and boats with more onscreen antics and explosions to focus on. Both games offer the same addictive qualities as the other as well as some challenging and fast paced gameplay.

What would I pay? At £9.99, which equates to £5 for each game, this represents great value for the effort and pleasure you will get from playing both titles.

Climax Studios Ltd. supplied theVRgrid with a review copy of this game, and regardless of our review, we thank them for that!