Care to take part in a harrowing space race through different sections of the galaxy? Than look no further than Astrokarts, an enjoyable space racer with intense moments along with some great visuals to accompany your experience.  You can’t help but get lost in your surroundings during your fast paces races across the cosmos. 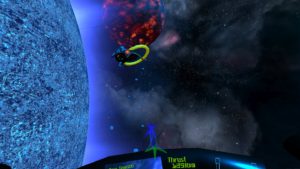 This game may not always look the best, but some of the visual offerings are amazing in VR!

Currently available are four different levels, each comprising of 3 stages, with 8 different space ships to choose from.  Each ship is organized differently so I suggest finding the one that is suited to your seating arrangement and general setup.  You will race against AI opponents only, with each check point in a race being a circle somewhere in space that you must fly through.

Every ship comes equipped with blasters and thrusters that each have their own cooldown time shown on the temperature display on the ships dashboard.  Each ship also has a unique navigation display with an arrow pointing towards the direction of the next checkpoint that you will need to pass through to progress in the race.  If you miss a checkpoint you will need to turn around and go through it to progress in the race.

Each of the four levels has its own unique visual effects and designs, as well as different tracks and challenges.  The first track is a basic loop around a big star which is esthetically pleasing but lacking any real challenge, unlike the latter stages.  The harder levels will present you with blind turns, closing doors, and other stage specific obstacles that will catch you by surprise.  These levels can be initially daunting and frustrating, but take the time to understand how to use the navigation systems and to maximize the specialties of the ship you have chosen, and difficulty eases up a bit.

The only real problem I had with the game is when I collided with something in the environment.  Generally, I found one of two things would happen; first I simply stopped no matter how fast I was travelling, which is jolting to say the least. Secondly you are violently tossed out in some random direction which is crazy disorienting and it takes a while to recover.  Seeing as how the tracks are wide and the point is too not collide with anything around you, these incidents happen infrequently.

The visual here are a joy to behold even though they might not carry the highest level of visual fidelity.  The sensation of flying through space being able to look around you and observe details in the stars is oddly relaxing, given the fact that you are in the middle of an intense race.  Each map will have some sort of “big” moving visual effect that you will be able to observe during your race.  The visual effects would have to be my favorite part of the game, even though they lack crazy detail. 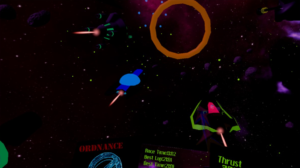 Don’t you dare miss passing through any of these rings, it’ll cost you greatly.

The audio in Astrokarts suits it perfectly.  The entire soundtrack is from lesser known, unsigned artists and I think that only added to the feeling that I was in some sort of alien race through the stars.  There is a pretty decent variety of songs to accompany your journey through space so audio tracks don’t repeat themselves as often as you would expect from a budget racer.

Astrokarts is an enjoyable space racer that had very negligible effect on me in regard to sim sickness.  The game looks good and does an excellent job at getting you into the race.  Along with each map presenting its own difficulties and challenges, testing out every ship could keep you busy for some time.  When you complete a circuit you feel like a hot shot pilot, and any game that gives you a feeling of accomplishment is a game worth recommending.

What would I pay?  I would value the game in its current state around $10.  I’m not sure if any more content is coming, but what’s here is easily worth the asking price and your time.