From the makers of last years cinematic VR horror experience The Exorcist: Legion comes another suspense horror tale centered around you, only this time around you wake up in a mental hospital, unsure of who you are and why you are there and must piece together the events leading up to your current plight.  This involves escape room type scenarios mixed in with some psychological horror that plays out in seemingly random fashion until all the events slowly slide into place. 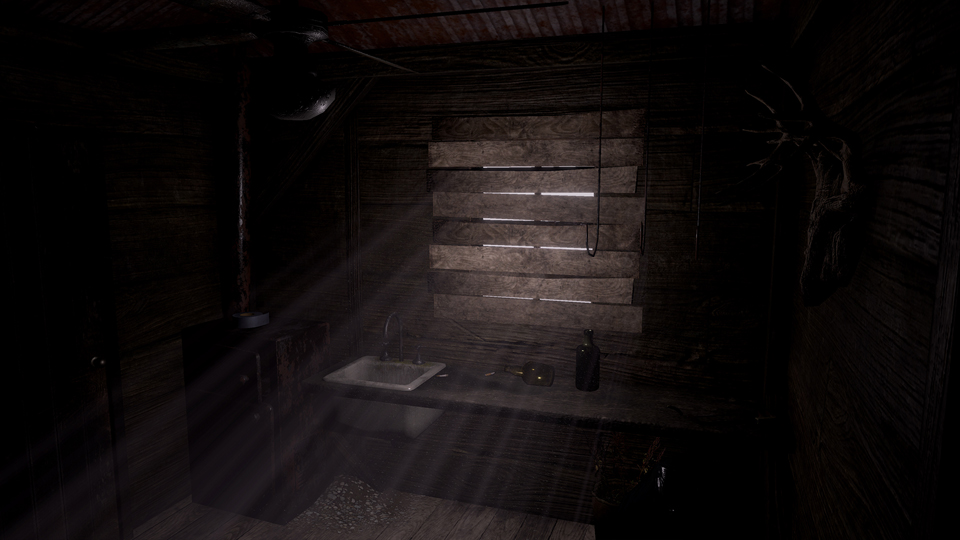 Every room solves a little of the mystery surrounding you.

Typical of VR escape room games, you need a couple of Motion controllers as you’ll be grabbing and manipulating a variety of items.  Every comfort option is available so whether you want to teleport and click-turn with blinders or the exact opposite with smooth locomotion and no comfort at all.  It’s commendable that the devs incorporated all options necessary to allow the user to choose how they like to play and not forcing us to endure one side or another.   Each stage in the game has you in small play area and you must figure out what you need to do to get out of that situation, learning a little about your past in the process.  It’s not just puzzle solving as some areas are much more focused on triggering memories and events by simply finding or touching objects scattered around the room you are in.  You start off in the institution and are asked to perform a few simple tests and right away you are clued in that something is definitely up as the puzzles don’t have the outcome that they should.  It’s very unclear in the early goings what is real and what is surreal and the way some of these stages play out is much more cinematic then game. 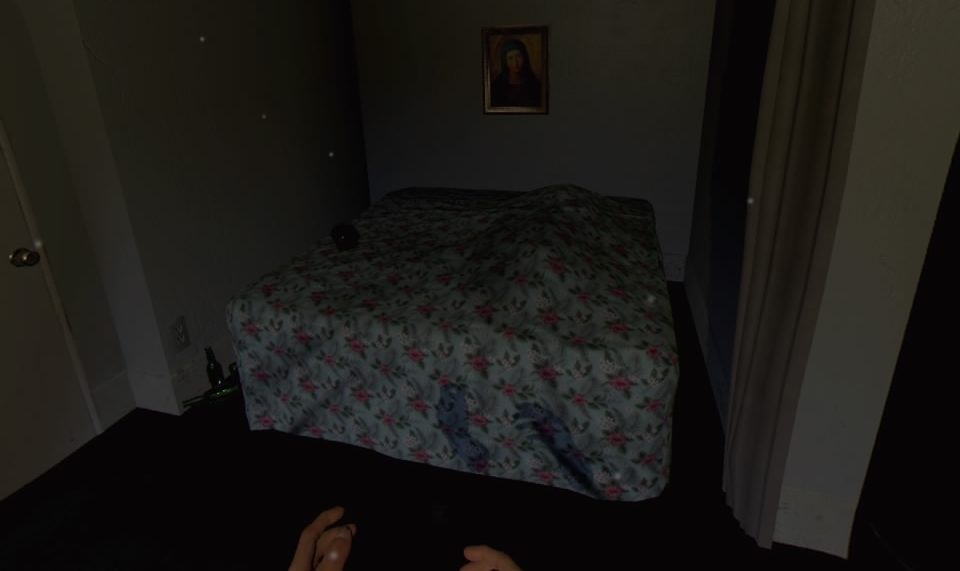 Its a bed in a room.

Greenwater looks fairly good though does have a few visual foibles here and there with some bland and flat textures.  Besides a few moments though, the game carries a higher visual quality thanks in large part to the smaller areas you play, each of which feels very authentic.  Whether it’s your quarters at the institution, a hotel room, cabin in the woods or any of the other settings, they all feel authentic enough thanks to some great lighting effects and other smaller subtleties.  As there are jump scares and a few unnerving moments, much of the game is bathed in darkness or uses darker tones allowing these scenes to try there best to spook you.  An early game boat ride in America’s deep south is one of the more non-interactive bits in the game and goes on way too long… until it doesn’t, and I really appreciated the diversity between the stages and the cinematic way some of these scenes unfold.

As this leans heavily on story telling, the game is loaded with actors delivering a wide variety of performances from your characters present and past.  Solid spacial audio is used to solve puzzles and help direct you to where you need to go with an insane soundtrack that delivers an experience akin to the most surreal of psychological horror films.  The performances and audio presentation really stand out as being something akin to a Hollywood film and adds a ton to the underlying suspense in each scenario. 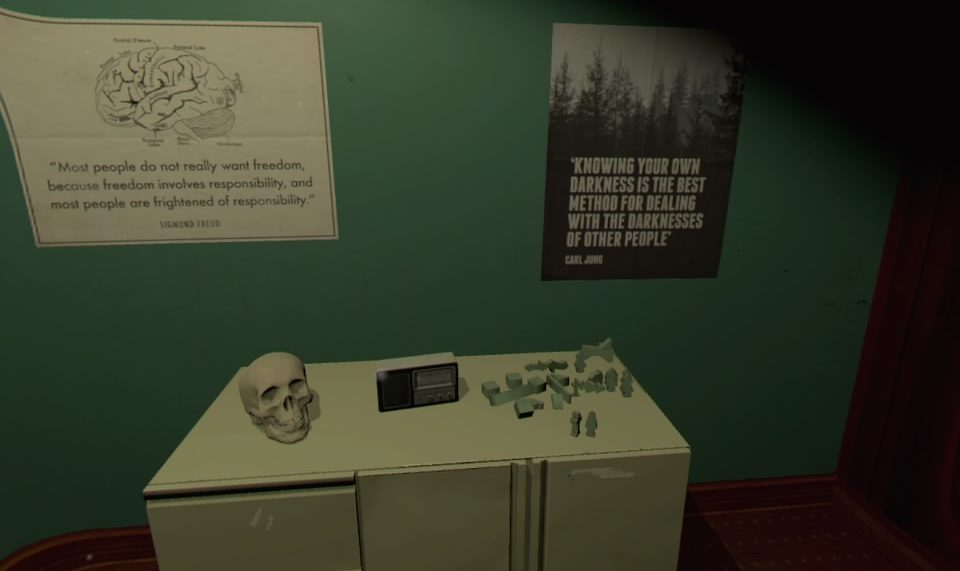 Every room offers something completely different

A Chair in a Room works wonderfully as both a horror/suspense experience and escape room game without every falling to heavily on one side or the other.  The rooms you find yourself in can be conquered in only a few minutes, if you knew exactly what to do or use hints, but will typically take much longer as you try and piece together what the game is asking of you.  My playthrough of the game took me around 2 and half hours minus one stage which held me up thanks to an item that disappeared that was required to solve the next obstacle, which I didn’t realize had happened until I looked up a video after the fact.  Despite that one glaring issue, Greenwater is a smooth experience save for the collision detection between objects which can cause some havoc as items get launched across the room, get stuck in each other or fall through geometry.  Like in the game Blind, I would love an item reset button just in case something wonky happens as the only way to fix any issues is to quit the game and restart that stage.   Most of the time, when these issues occurred, it was just a matter of grabbing something that fell, but the visual look of these issues does stick out as poor design when compared to everything else in the game.  The puzzles are never truly difficult as long as you pay attention to your surroundings or clues given but should you find yourself stuck, there is that clue option that can help you out though I don’t recommend using it as the solution is usually obvious given just how confined each area is. 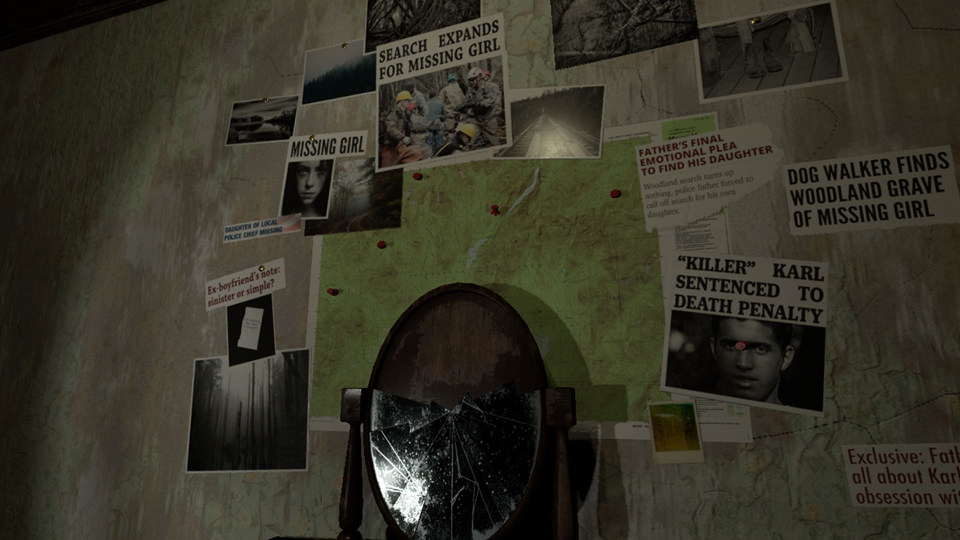 There’s a lot of narrative to cut through here.

All in all, A Chair in a Room works great as psychological horror game that never lets you relax.  The puzzles are intuitive and never feel unfair, but still require enough thought to make them feel rewarding whenever you figure them out.  The narrative is fantastic and what initially seems like an erratic story slowly falls into place until the ending which I was satisfied with.  If you are into mind-bending horror and mystery and don’t mind solving environmental puzzles along the way, then A Chair in a Room delivers a fantastic and surreal tale.

What would I pay?  This is $25 US which an alright value given the presentation and story telling though given that the right person could breeze through this in less than 2 hours, I’d like to see this dropped to $20.  Regardless, it’s a great and unnerving time in the headset and a welcome addition the suspense/puzzle genre.

Wolf and Wood Interactive provided The VR Grid with a press code for this title and, regardless of this review, we thank them for that!