Overwhelmingly, A Story of Distress is a fun first-person single-player adventure game for anyone who is looking to scratch that stealth itch in VR. Despite various flaws, the game never felt broken to a point of unplayability, and I’d even hazard a guess that the current bugs will be quickly fixed after release. 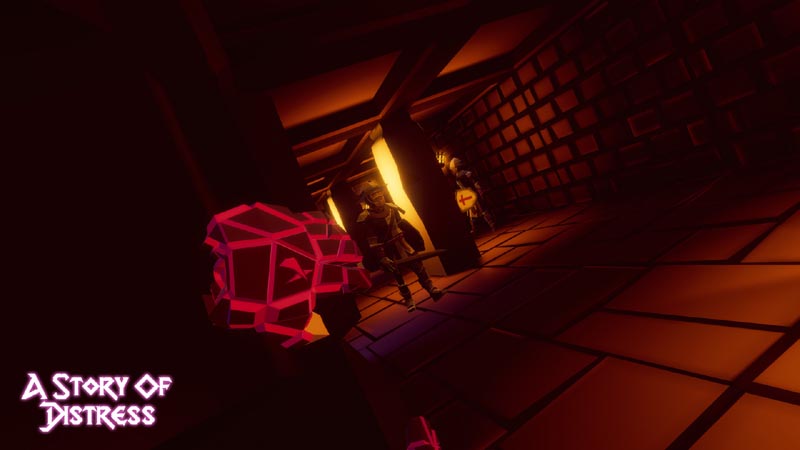 Every stealth section is a little intense.

You play the role of a travelling merchant, who comes to the city of Aston with your brother in the hopes of making a name for yourselves as successful merchants. Unfortunately, once in the city, your brother is struck down, and you must seek to avenge his death. This is where the stealth gameplay comes in. Since you are not a great warrior, you must sneak around the city, avoiding or killing guards to reach your final objective: killing your brothers murderers. You have a small inventory that grows over the course of the 3 hours of gameplay, but your most trusted item is your knife. One quick stab to the back and guards die instantly. You also acquire a bow which works very well making A Story of Distress feel a little like a mix between Thief and Dishonored. I had loads of fun crouching behind buildings and hiding in alleyways to avoid guards, and I truly believe this is the next step in getting good stealth games in VR.

As it is hand tracked controllers in use, everything is up close and personal as you dispatch your foes.  Besides just sneaking up to them or picking them off from a distance, there is a climbing mechanic utilized that allows you get some to some advantageous vantage points.  From here you can scout out the situation a little bit better or, if you plan it out well enough, you can stealthily drop down upon the unsuspecting guards, which is was always a thrill. 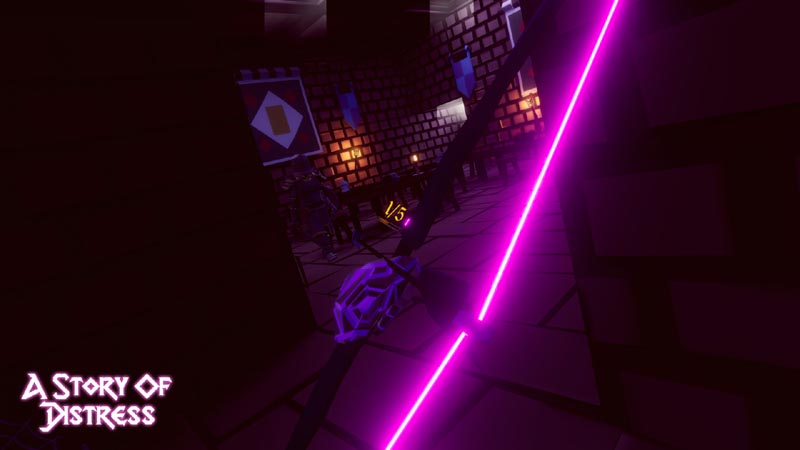 The bow stealth kills are oh so sweet!

While A Story of Distress is quite a lot of fun to play, it does have some quirks. During the opening scene of your journey to Aston, the sun shines VERY brightly, sometimes obscuring your brother, which made for a bit of a poor first impression. Other issues include, guards rag-dolling into the sky at mach speeds when stabbed in the back. On a few occasions there is some inverted hand placement of your knife (still very much playable), and guards that can occasionally see you through very small cracks between barrels (realistic I guess, but annoying to the player). These little things add up, and you will notice them, but none of them keep the game from feeling tense, or enjoyable. I also unfortunately went back to the menu after the intro scene, and found there had been no autosave, so I had to sit through the whole thing again. Devs, please put checkpoints after important set pieces!

Graphically, this game has a very nice low-poly art style, which is an interesting decision for this style of game, I don’t believe I’ve seen any stealth games rendered as such. This makes the game feel more lighthearted but is not distracting from actually gameplay. Everything has just enough detail to be interesting. The music is nice, but I didn’t find myself humming it after playing. It serves its purpose well, and the music that plays when the guards spot you definitely gets your heart pumping. The voice acting is a bit over the top, but as most of the game doesn’t require any speech, I wouldn’t say it is anything to complain about. It lends a nice campy feel, which while slightly off-tone, gives a certain charm to the characters. 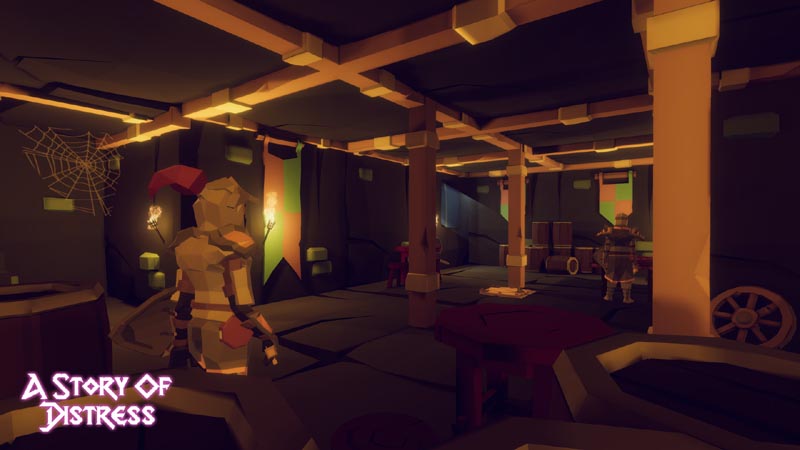 Sometimes you got to scout out the situations before you make a move.

Overall A Story of Distress is a standout game in the VR stealth genre but has too many small issues at launch to keep it from truly rising to the top. This will be a game that people will play once or twice and then forget about, unless the devs do something to keep the game fresh. Issues aside, the game is a fun and unique experience for VR.

What would I pay for this: I would happily pay $20 for A Story of Distress, but I think their current price tag of $29.99 is a bit steep for the 2.5 hours the game takes to complete. I do see myself going back to replay the game as I am dying for stealth in VR, but replayability will vary from person to person.

Yellow Panda Games provided The VR Grid with a review code for this title and, regardless of this review, we thank them for that!