A point and click “adventure” that would bore you to sleep if it wasn’t so mercifully short.  You play as Thor, but don’t get excited as you do nothing godlike in this game whatsoever, and it’s your job to stop Loki from bringing Ragnarok upon the Earth.  Downloaded from the Occulus store for $3.50, this game is the definition of the reason why I started reviewing VR games.  It is terribly short, I beat it in 15 min and the only reason why it took that long was weak game mechanics. 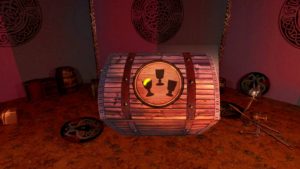 You play as the Mighty Thor!!! Inserter of Chalices in Treasure Chests. Man this game sucks!

Visually lackluster, you simply look in around, find the objects required to progress and that’s it.  Environments are bland and are mostly just a 2D background image with a few 3D objects inserted to make those areas seem more interactive.  The visuals aren’t terrible, they are just in no way worth fussing over…bland in other words.  What’s even worse is the game forces you to revisit a few areas to find new stuff making this repetitive experience even more repetitive.  There is no sense of danger or adventure or fun to be had anywhere in this game.  You simply look, tap and repeat.

This game is a waste of your time and money. It is uninspired in every way you can think.   Even the use of Norse mythology is nothing more than an apparent excuse to skin this game with something that sounds interesting but is barely touched upon other than give this mess a theme.  Don’t bother playing this game.  Spend your money on something worth supporting, not this shovelware.