Battlezone is an arcade style tank shooter brought to life in VR.  This is latest game in a franchise that goes back almost 4 decades.  This most recent iteration is definitely multiplayer focused, and depending on what you want out of your games, that may be enough to warrant the price tag. 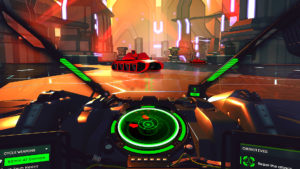 You have never experienced tank battles like this before!

The visual style is monochromatic, but still provides enough detail to make this game look really good.  Think Tron, with a brighter color scheme.  The scale as well is huge with some levels looking absolutely massive and added to that is there is no noticeable draw distance so you can see as far as the environment lets you.  Your view is from the cockpit of a tank and though you don’t have a body(booo!) the interior is full of screens replacing a traditional HUB.  I really don’t know if it’s possible for me to play these cockpit style games without VR.  Its just awesome to be in the middle of a battle and still be able to freely look around from my cockpit and check out what else is happening around me.  Vehicles lack a tonne of detail, but the art style presented hides that well.

A few electronic tracks play over top of the action and fit great with visuals.  Audio effects are good, but sometimes sound a little subdued.  I want my giant cannon to sound like a GIANT CANNON!   It’s a minor complaint and in the heat of action you’ll be to focused on survival to whine about quiet guns.  Overall the sound works great.

Single and multiplayer experiences are almost identical with you, as part of a resistance, tasked with fighting off the robot hordes who have taken over earth.  Simply choose campaign map size and difficulty and the game will generate a hexagonal map for you to navigate through.  Each Hex on the map is a different mission or supply depot and the goal is to get to the enemy’s main base on the opposite side of the map and destroy it.  Missions will have you defending bases or escorting a convoy or just removing the enemies from the area but they all essentially devolve into you destroying units until the mission is completed.  Supply depots provide upgrades for your tank with new weapons and other accoutrements allowing you to spend the data you collect during the missions.  Every time you start a new game, a new map is procedurally generated so you never repeat the same map twice.

Multiplayer is the standout here as it provides a few elements lacking from solo play.  For starters a team! Up to 4 players can assail the enemy and with full mic support, coordinated attacks are a breeze and a delight.  Teammates also have the ability to heal and revive each other making battles even more intense as you don’t just have to watch your back, but keep an eye on your companions as well.  The action in multiplayer is fast and furious with waves of enemies assaulting you from all sides while you and your team try to complete the stage specific goal.  It’s a blast!

Playing single player is a different monster as you are alone against the enemy hordes and because of this the difficulty and frustration are increased.  Supply depots are supposed to be a place to upgrade your tank, but because this game forces a complete restart (including a new map) on death you will be spending most of your hard earned data on extra lives as opposed to extra firepower to ensure you can make it to the end.  Secondly is the lack ability to heal yourself, making every hit a stressful one.  Though enemy AI isn’t the most strategically oriented, the volume at which the come at you ensures you will take damage.  If you are going to play single player, play it first because once you play with others, it’s hard to go back to riding solo. 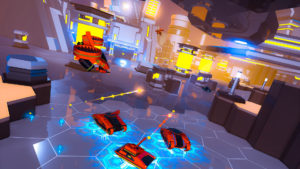 If you see red, shoot ’till it’s dead!

Dual Shock is the only supported controller and it works wonderfully.  The controls are tight and responsive and though you are driving tanks, they feel fast.  Added to that are a speed boost button and some gliding mechanics and you will be ripping around the map with ease.  I did have a problem staying to close to teammates and getting caught in a traffic jam like situations where we couldn’t easily drive out away from each other; it was rare, but it did happen on more than one occasion.  You can only fire one weapon at a time and switching takes some time so I found that I stuck with 2 main weapons even though the I had plenty more in my arsenal.

Battlezone is great online fun.  With campaign style multiplayer, slightly varied objectives, upgrades and new maps every time your play there is a tonne of replayability here.  The single player not so much.  It’s still fun, but compared to the multiplayer it just feels lacking.  Overall its just a solid game and just plain awesome!

What would I pay? $60.  It’s mutiplayer co-op bliss. If you are more of single player gamer than maybe wait until this one is in the $30 price range before you buy.