100′ Robot Golf is exactly what it says on the tin.  Developed by No Goblin, a small team based in Seattle, whom released their début title ‘Roundabout’ in late 2014.  Included are three main game modes: quickplay, campaign and an online leaderboard challenge mode called ‘Hole of Fame’.  The game is playable with DS4 only, with no motion controls and is currently available for $26.99 US from the PlayStation Store. 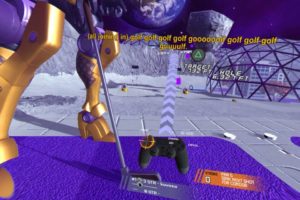 Come fly with me…Playing golf on the moon at Alan Sheppard’s actual tee off point.

Once on the course you are seated within the cockpit of your 100′ robot.  Different robots are available, selectable in quickplay only, each robot using a slightly different control scheme.  There is a choice of three clubs: wood, sand wedge or putter, three general styles of shot: mid, high, and low as well as the ability to add finesse to each shot.  Like traditional golf games, slice and hook are utilized too, though how this is implemented depends on the robot you are using, which is a nice touch.  Campaign mode has a wacky animé story, using beautifully drawn characters that is slightly reminiscent of the classic 2D shmup, Bangai O.  The writing is quirky but I did find myself wanting to skip it at times, even though it is brief between rounds.

Piloting your robot is easy. Each one has the ability to fly, fire various weapons and use your club as a melee attack to destroy obstacles.  The graphics are reasonably crisp, a realistic yet cartoonish style. The sense of scale is impressive too.  It is slightly confusing at first as there is no tutorial, but within five minutes you will have got to grips with the mechanics of the game. Aiming your shots is easy, though often you will have to manipulate the camera so you can see exactly where you want to place your shot.  This can be slightly annoying sometimes as getting the right camera angle for perfect shot placement can be tricky, particularly on the green when other robots are in the way.

Occasionally the ball hits the AI robots in the arm or legs, bouncing off of them. It is a minor annoyance which you need to take into account when targeting your shot.  It is sometimes difficult to see exactly where the hole is on some courses too.  From the beginning of the course this is easy to gauge but mid-course it is all too easy to lose your bearings, especially in courses with multiple islands and mountains.  This is solved by flying straight upwards a couple of hundred feet to see if you can spot the hole.  A mini map would have been helpful.

Each hole includes the usual golf game staples such as wind direction/speed as well as gradients on the putting green.  While playing you are presented with a running commentary which is occasionally hilarious and I genuinely found myself laughing out loud.  It does start to wear thin pretty quickly though as the same voice clips start to loop.  The sound effects and music are great, suiting the game perfectly.

Environments for each hole are diverse and include cityscapes, the moon, underwater and Japanese mountains with gravity and physics being suitably different for those where golf is not typically played.  There are only 36 holes which is enough for a couple of playthroughs in campaign mode.   I had fun in campaign mode despite the minor frustrations, though it doesn’t last long.  The environments and holes are varied enough to provide plenty of challenge. 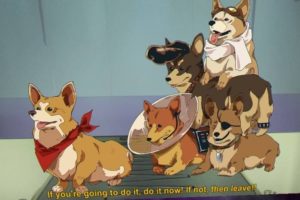 Yes you really get to play as five dogs inside one robot!

Online multiplayer though is a massive let down.  It is available only in quickplay mode but not in VR!  The game asks you to switch to TV mode if you are in VR when trying to select multiplayer mode.  Online play using the cinematic mode is a lot of fun although the lack of online multiplayer VR is a glaring omission.  This feels a little bit deceptive as this game is marketed as being fully playable in VR.  It is essentially a rush for each player to finish each hole, as every player who does not finish gets a ‘dnf’, the hole is finished as soon as a player putts the ball into the hole.

Which leaves the final mode, Hole of Fame.  In this mode, you have a bunch of leader board challenges: Speedrun, where you attempt all 36 holes in one go, strokerun, where you take on all 36 holes again, this time at a leisurely pace.  Finally, there is individual hole strokes / individual hole times. This mode is also accessible via the main campaign mode as well as quickplay.  This final mode adds more longevity to the game for those that finish the campaign mode and want a further challenge.

Overall I enjoyed this game and had fun playing.  Where it shines is as a fun party game with split screen couch coop and online multiplayer but both options are available in non-VR mode only.  It feels as if the VR mode was tacked on late into the games development.

What would I pay? $26.99. It’s worth full asking price. If you’ll forgive the minor annoyances, and are buying this just as a single player VR game, there is just about enough content to justify the price tag. If you like the idea of a non-VR online and couch coop wacky golf party game with a VR mode, then this is worth your money too.