Ahead of you is a space shooter/mining adventure that treads familiar territory in both narrative and game mechanics.  The action takes place soley behind the helm of your spaceship and while that isn’t necessarily a bad thing(see Eve Valkyrie) how the game unfolds makes this more trouble than it’s worth.

The gameplay here almost exclusively takes place behind the cockpit of your mining vessel and you, as Casey Black, are thrust into a situation way bigger than you are used too.   On a simple mining mission, you come across some information which elevates the world around you out of control.  Help a resistance, fight the government and free the people.  Standard adventure tropes abound here.  The only other mode of play is an in-between mission section where you interact with a few character who catch you up on the aftermath of the previous mission.  You can’t walk around, but navigate by teleporting to predetermined spots and performing whichever actions you are allowed there. It’s dull. 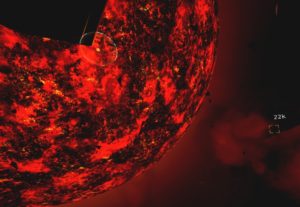 One of the best visuals this game has to offer.

Space flight is alright as far as space physics go, but just alright.  Your mining ship seems to carry a fair bit of weight and turns incredibly slow, affecting combat in a negative way.  A nice touch is that all your ship controls are controlled by different menus in your cockpit and helps make this game feel a little more real, though as the game progressed I wished these buttons were mapped to my controller for easier access. Shooting mechanics are of a standard fair and depending upon the weapons you have equipped you can look where you want to shoot or be locked in place needing to focus on targets within your crosshairs.  Lastly is a mining mini-game which consists of launching a probe at an asteroid and selecting where you want to drill and how deep to acquire the most resources.

Both the above mechanics just get old.  Mining quickly becomes an unwanted chore, but is required to unlock new upgrades for your ship.  Space flight works fine until you get into a fire fight.  Enemy drones are incredibly fast compared to your incredibly slow vessel.  It’s easy to get turned around here, especially in drawn out battle and getting your bearings again can take some time.  Also, you have a limited boost which helps in battles, but doesn’t last long enough when you are travelling extensive distances, forcing you to take your sweet time navigating to an objective, and triggering more attacks.  The more I played the more I felt like everything here was designed to annoy and frustrate.

Add to that are the visuals and voice acting…oh my god the voice acting!  While the supporting cast does a barley tolerable job, your protagonist does not.  I’m not sure what a Martian accent is supposed to sound like, but if sounds like this I would never make any Martian friends.  Wooden delivery is at its finest here from most characters, but you especially are annoying, and you talk…a lot.   Other sound effects just feel muted; guns have no real impact, even taking hits is quiet and subdued.

I laughed when I saw an image of myself talking to my ships AI.  I look like a character from Redneck Rampage, complete with late 90’s character modelling.  Characters look bad and their mouths are barely mapped to their words (if at all).  Combined with the not so great script and the story presentation falls on it’s face.  Space on the other hand looks better, but not significantly.  It’s dark, and at some points, way to dark.  Having to find mission objectives on an asteroid surface using your ships flashlight is an exercise in frustration.  Other details from the universe around you are masked in darkness and I can’t help but feel this was done intentionally for the PSVR, for what reason I don’t know. While distant visuals seem to be an issue in VR, get close to items here and they look even worse. Scope and scale are used nicely here and objects in space can look very small or gigantic.  It’s just getting to close where that immersion is ruined. 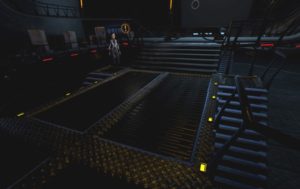 Almost everything in this game is dark, drab and lacks detail

I have to bring up the darkness again, if not because the video in the PS store shows a very vibrant, and detailed game.  Clearly they decided to upload Oculus Rift footage instead of PS footage because all the fidelity seen in that video is absent here.   Loading times are also terrible showing only a black screen until finished.  I thought my console crashed while the opening level was loading.  Also, as this is episodic, the campaign ends on a “To be continued” note with no date set for the next chapter.  I encountered a few glitches where enemies respawned relentlessly until I died, restarted from the last checkpoint and continued on my not-so-merry way.

What would I pay? $5 is as high as I would go.  While there are a few massive scale centric levels that are worth checking out, everything else about this game is a chore and a bore.