I’ve said for awhile now that the ability to travel the world from the comfort of a headset would be a big selling point to people who just might not be that into VR gaming.  With mobile HMD’s currently dominating the VR Market, it only makes sense that we see more and more of these types of apps with Wooorld being the latest, offering an experience similar to Google Earth VR, but shrunk down for the Quest 2 headset, offering up a social aspect that lets others travel alongside you.  You’ll have to give the game a verifiable email address to “help provide an enjoyable and safe experience for everyone” and while I’m not exactly sure what that means, once you do so you’re good to play the game.  A quick tutorial runs down the controls giving you the ability to search, zoom and navigate the world, which is displayed before you on a square, large coffee table like map.  Make sure you are connected to the internet as playing offline is not an option.  Should you choose, you can opt for hand tracking which here, feels like a way better use of that control type than in a video game though I did find it to be more cumbersome than using controllers and while it’s not bad, it still feels more like a novelty and is not my preferred way to play. 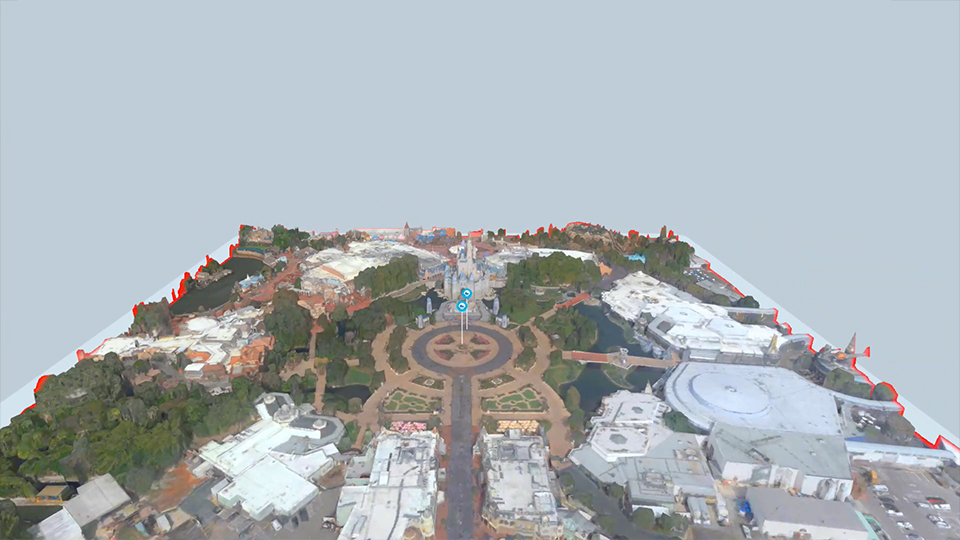 The stock view can be a little lacklustre, but you can spice it up if you want.

You can choose to free roam the earth alone, with friends & strangers or try out the ‘Where In the Wooorld’ game which has one player being dropped somewhere on the earth thanks to google street views 360 pictures that surround you and asks you to figure out where you are by taking in the sights.  Anyone who joins that player can help out just by chatting and when the active player is ready, they can select the location they think they are at and are scored based upon how close they got and how fast they answered.  Each round consists of 5 separate games, each consisting of 5 different locales from either US, EU or the world and once finished you are scored and can check out your placing on leaderboard floating in the environment.  It’s a fun game though admittedly as guy who doesn’t travel a lot, I never came close to the top of those leaderboards, but it adds a nice social element outside people just chatting. Heading back to the main experience lets you navigate to anywhere in the globe using the search bar and lets you zoom in or out at your leisure and dropping down to street view just about anywhere.  You can bookmark sites you may want to revisit later, snap an avatar selfie or even leave a little drawing thanks to a simple 3D art tool that others can see if they visit that same spot giving people a few things to do beyond just zooming in and out of places. 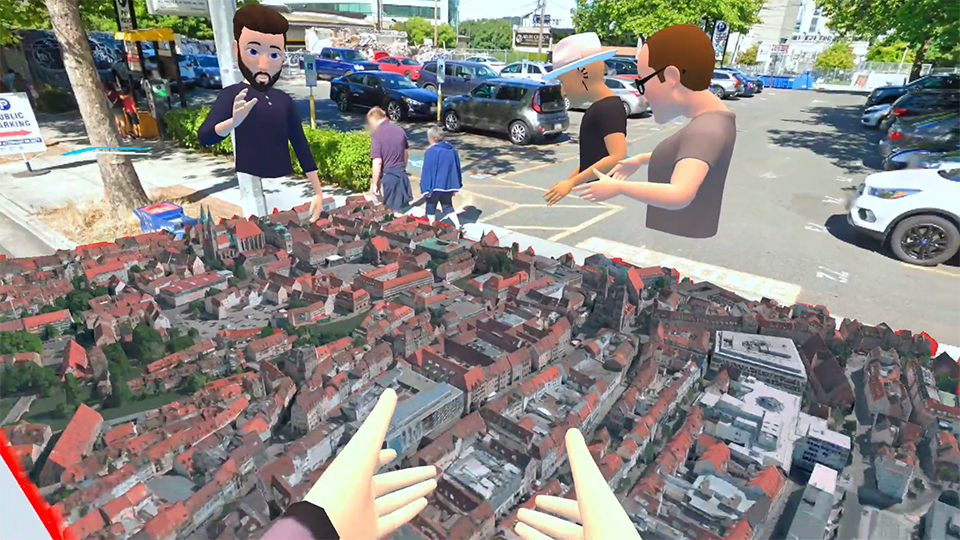 It’s easy to travel with others!

Speaking of zooming in and out of places, I think those that have been waiting for a true Google Earth type app for their Quest headset won’t be disappointed by what’s offered here.  With that said, there are limitations that do stand out, especially when directly comparing it Google Earth VR, with a notable absence being the curated tours though compared to other Meta apps, this is far and away the best one on offer so far.   The viewable map looks much more like a large tabletop with the edges of the table cutting off the 3D modelling but still allowing for resizing of that area to some extent and still letting you drag and pull yourself around the map or even take control of a paper plane and fly it at a steadier pace in any direction you want it to go.  Beyond the map is single color background though should you choose, you can toggle the passthrough camera, essentially placing the map in your room and giving the appearance that your friends are with you as well or you can replace the background with a street view image.  Unfortunately, the low resolution, grey scale option on the Quest doesn’t look great so while I appreciated its inclusion, I tended to go for the in-game background and yes, I am admittedly jealous of Pro owners and their color passthrough option. 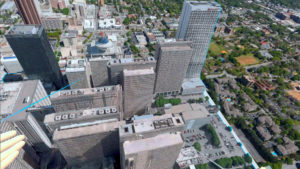 You can get pretty close to the ground to check out some finer details.

The 3D landscape modelling is okay and definitely akin to what Google Earth has to offer though in my brief testing, some of the satellite maps in Wooorld are a little out of date compared to Google’s though street view looks identical as far as I’ve seen.  As I zoomed in and more details became visible, it was cool to see cities take shape though expectations should be tempered as the 3D rendering is dialed back to larger buildings with many residential and other shorter areas remaining flat.   Getting closer to those rendered buildings may not show perfect representations of the actual structures, but this still gives a pretty slick example of what that area would look like.  When searching for a new location, upon selection, the game will zoom out and fluidly take you to your new destination, zooming in fairly close before giving you control once more and is an awesome way to travel around the globe.  Make sure you have a good internet connection as the maps are live loaded so any sort of loss of data results in exactly that with areas taking their sweet time to load, which in my experience happened often, but I forgave it considering the platform and the fact this has just hit wide release and I’m hoping the developers can iron out some of those kinks.  Wooorld also uses Meta’s avatars so if you already have yours setup, you’re good to go. 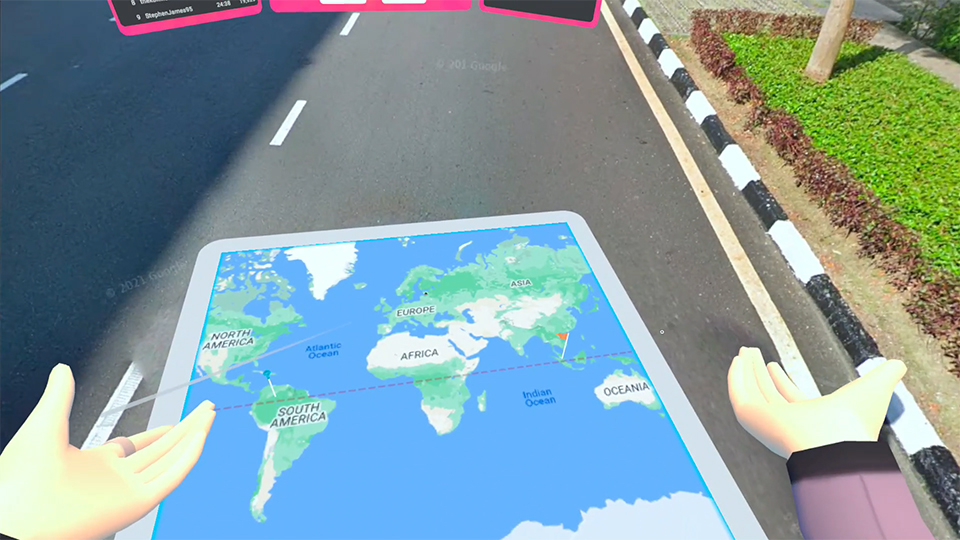 Where in the Wooorld is a fun way to learn some geography.

There really isn’t anything too special to talk about when it comes to audio as the only 3 things of note are the toggleable (is that a word) melodic background music that plays, that in-game-chat works so you can talk to your friends and menu beeps and boops that help you select whatever you are looking for.  That’s all fine I suppose, but I wouldn’t mind seeing a little more effort in this department, maybe by adding more localized effects like the sounds of traffic in a big city, water lapping on a shore near a body of water or wind rustling through trees as effects like those would add to the escapism of it all but maybe that’s just more of a want on my end and regardless, what’s here still works. 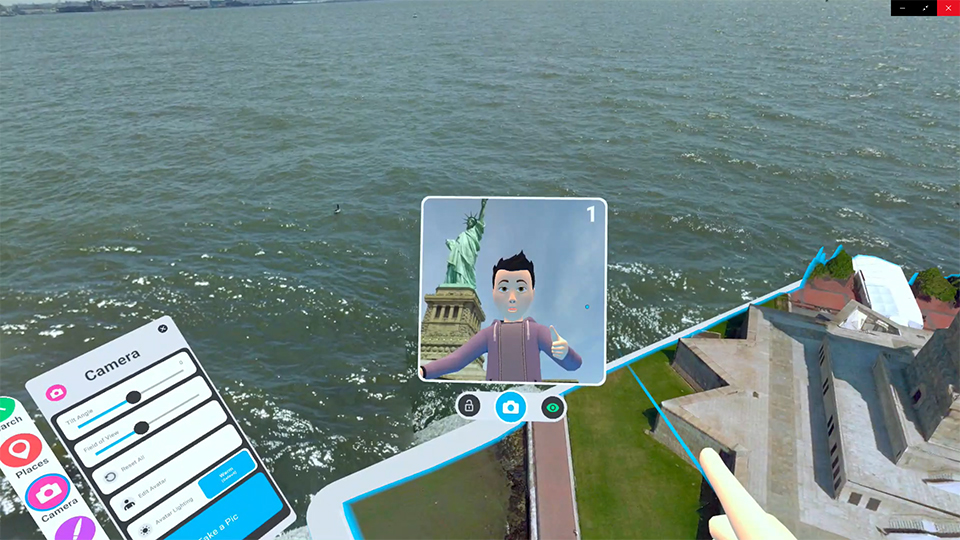 Snap a selfie anywhere you want!

I think for many Quest users, Wooorld will be much appreciated as they have been waiting years to get an experience like this that emulates Google Earth VR so well and even though it doesn’t reach those lofty heights, it is still the best attempt yet with it’s closest competition on the Quest, Wander, falling far short of this.  The social stuff adds some nice reasons to hop back in to chill with friends or make new ones and the competitive side of the ‘Where in the Wooorld’ game is a nice touch.  Bottom line here is that if you’ve been waiting for a geography experience like this for your Quest headset, your wait is over and you should probably just pick this up already

Wooorld Inc provided The VR Grid with a press code for this title and, regardless of this review, we thank them for that!