It’s time to get physical in VR!  Viro Move looks to bring a variety of activities your way with the goal being to get moving as you punch, slash & shoot your way through a plethora of workouts, burning those calories and chasing those high scores. 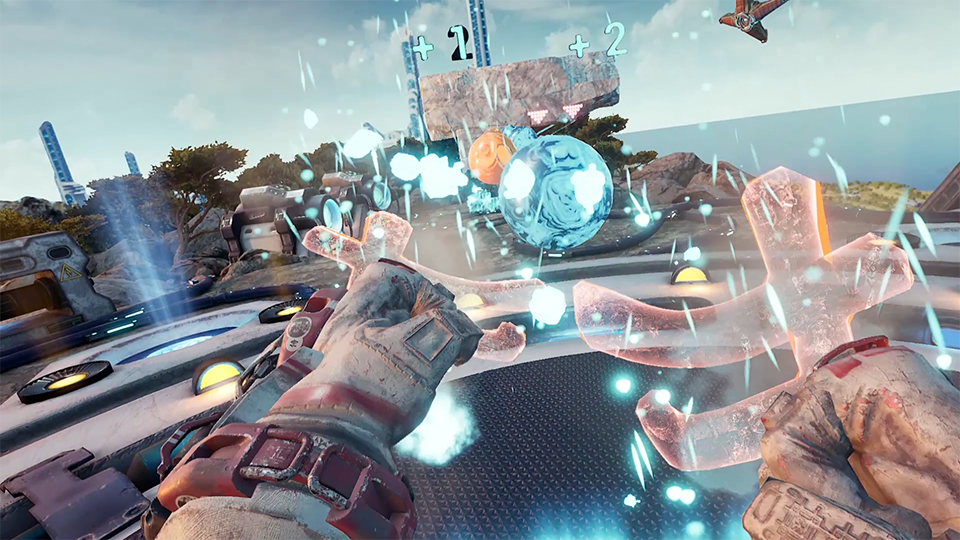 The boxing is easily the best workout in the game.

After some initial questions about your weight and so forth, you are ready to take on any of the 4 modes available. It is important to note that Viro Move does require a wide play space as each of the modes available will have you dodging a variety of targets by moving left and right quite a bit so make sure you have enough space.   Boxing is self explanatory with each hand having to punch color matched spheres not unlike what we have seen in countless other physical VR games with the addition of walls and tunnels that need to be avoided lest you take damage and your score modifier reduces. Shooting takes a page out of Audica’s book, requiring you to shoot floating robots ahead of you when reticles around them close in, shooting them at the right time for maximum points.  You’ll have to dodge their various attacks, shoot other targets and collect orbs that fly at you as well, making for an workout that can be challenging, but is ultimately the least physical out of the 3 core options available, at least in my opinion.  Lastly is the sword activity which plays very much like Beat Saber and its many clones though with this one, there is no need to differentiate between which swords can slash which target meaning as long as you slice it, you get the points with obstacles flying your way and orbs you need to touch with your blades for a higher score.  Each of these modes relies on combo’s and constant movement to get the highest score so missing any targets, getting hit by incoming barriers or just not moving around enough will reduce your score.  You also have a life bar which depletes the worse you perform, but refills upon each successful hit of your targets with the core modes providing enough challenge to stay physical without me ever really worrying about my health.  Each mode is broken up by track and difficulty with 30 individual workouts that get successively harder.  The last mode merges all 3 play styles and changes your weapons on the fly so you you’ll need to stay on your toes as the mechanics switch up on a whim.  Outside of the career options are the “challenge” stages which pit you against insanely difficult songs that, once conquered, offer up loot crates with new cosmetics.  Should you want to customize your own workout, you can thanks to the custom playlist option that lets you mix any of the songs and difficulties in the game into one workout.  Leaderboards are assigned to every track and for every one you complete, you earn points that can be spent in store on cosmetics like different gloves, blades & guns. 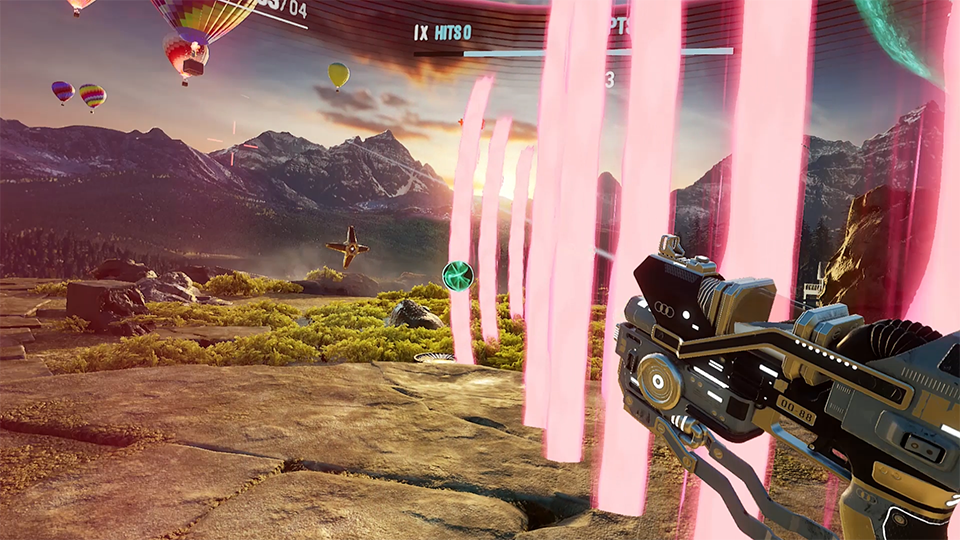 The gun stuff is fun, but easily the least intense workout in the game.

Viro Move offers 5 different environments to play in and all of them look surprisingly good.  You could be near a volcano as it spews forth tons of smoke, on a nighttime dock with a cyberpunk city in the distance, a glass bridge overlooking a desert canyon or in grassy settings with ruins scattered about.  Each setting looks great with a small robot spawning in the all the items you’ll have to hit or avoid and while that can look a bit silly when it spawns in floating walls, it’s an overall effective presentation that feels largely fresh when compared to most other workout type games.  Your gloves and weapons carry a ridiculous amount of detail and look like they belong in an action title over a workout one with all the obstacles that come your way also having more detail than I expected.  The menu system can be a little clunky to navigate with a few tabs and a drag to scroll option that is awkward with all your health info and other options being given their own tab.  After each song a summary of your performance will display how well you did, including your calories burned for that session though once I quit a session, I couldn’t find my daily stats as the game seemed to only store my lifetime progress which seems a tad silly as that doesn’t really tell me how effective my more recent workout sessions have been.  Still, I was pleasantly surprised by the look of the game as it offers something different from its competitors. 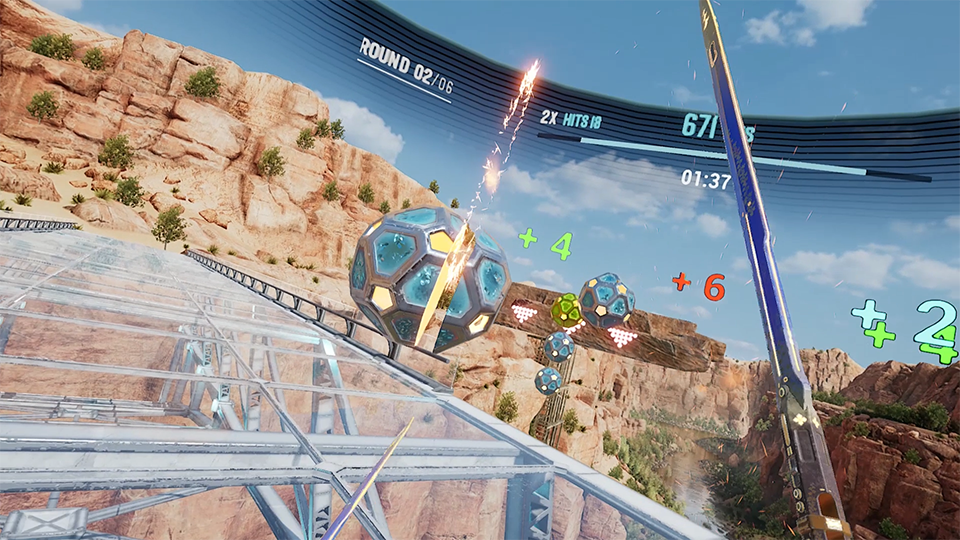 the swordplay is a little trickier than it looks.

Sound wise, Viro Move takes a rather large hit as, by my count, there are currently only 11, very generic, EDM songs available, each clocking in at around 3 minutes or less.  While each song has multiple difficulty options across the various modes, having heard the same song more than I’d like became a larger issue the more I played…to a point where I just didn’t want too though that is coupled my other issues I’ll mention below.  Those 11 tracks are…ok, I guess, but in truth none of them stuck with me and like I said, the amount they replayed anyways had me annoyed at the ones I liked so that’s a definite issue.  A female host will guide you through the tutorials and tell you to move back into position if you’ve gone to far out of the play space with all the other effects of shooting, boxing and slicing stuff all sounding on point.

So, I have few issues that also hampered my workout fun with this game outside of the limited soundtrack.  The career mode forces you to play through 30 songs before conquering that mode which is alright, I guess, but when looking for a challenge, the easier courses might not provide you want you want but you’ll have to play them to get to the harder ones. You can make your playlists and choose any difficulty you want, but as the career mode is little more than broken up beat maps, having the option to jump around and complete them as I wanted would have been a better option.  That brings me to my next issue in that the harder songs are too hard, or more specifically, they feel more like the devs stopped mapping beats and just decided to see how many assets they could fit on screen at one time.  I’m sure that’s not the case and I bet someone out there could publish a perfect run on the hardest difficulty but trying to memorize those beat maps just seemed counter-intuitive to working out and while I was definitely moving around a lot more, flailing with reckless abandon in the hopes of hitting enough notes to keep me alive, it stopped being fun and it just felt silly.  Even the mapping on easier songs felt off and didn’t seem to match the beat all the time which was also a killer for getting into the groove.  By no means is the game broken and on those middle difficulty songs I was moving around like a madman, and it felt great as I built up a sweat and had fun doing it, it’s just that once I played the same songs for the umpteenth time in only a few days, I was just kind of over the whole experience and went back to my other VR workout titles. 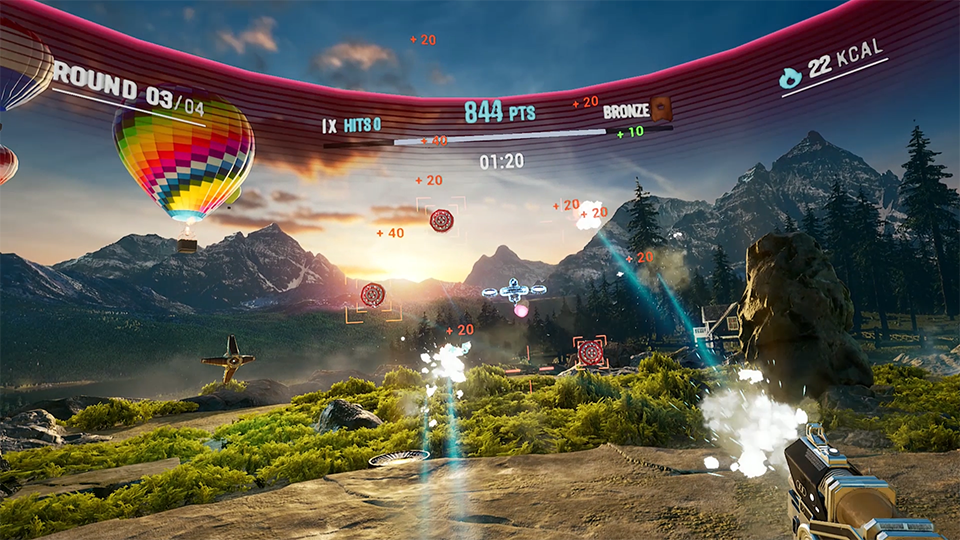 Viro Move has a strong foundation for a solid VR workout game but lacks in content to really make a replacement game for any current regime you have going for yourself.  It has a better place accentuating your VR workout program as the mix-up in the gameplay elements and the amount you have to move is a nice change of pace from other titles, but it’s something I just don’t think I’ll come back too given the other offerings out there.  If this gets more songs and maybe more  custom-pre-made workouts/playlists with varying times and difficulties, that will go a long way to extending the games life, but as of right now, it just needs more.

What would I pay?  This is $25 US and that just seems to high for the 11 tracks available.  Assigning various beat maps to such a limited track   list isn’t enough to keep me interested in playing h this for any extended period as it won’t take more than half an hour a day before you’ll be forced to listen to the same generic songs again.  If you are desperate to mix up your VR routine, unless this gets a substantial boost in the song count, $10 is as high as I would go for this.

FIT REALITY provided The VR Grid with a press code for this title and, regardless of this review, we thank them for that!