A Tower Defense title that literally has you defending a tower, or the being on top of it depending on what assails you.  Requiring only a headset, Bluetooth controller is supported but it’s only for comfort, you build defensive structures to attack the oncoming enemy.   There are 3 waves per stage and between each stage you can spend the loot received from completing the previous wave on new defenses.  It’s pretty simple and would be kind of a throw away game except that you can also control certain structures (archer towers for example) and take control of the battle in a more personal way.  That function is a game saver as your structures are not always up to the task of hitting the oncoming enemy. Downloaded from the Gear VR store for just under $6, this genre is a welcome addition to VR, but this may not be the best game to represent it. 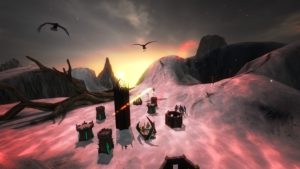 The visuals look good here, but strapped a few inches from your face and the flaws become apparent.

Visually uninspiring is the best way I can sum up this game.  The landscape is barren and drab no matter what level you are in, enemies are little more than stitched together shapes formed into skeletons or other enemies(the eagles look cool though) and the different towers you have look exactly like they would in any other tower defense game.  That’s not say the game looks terrible, just not great in any way.  Audio on the other hand tended to stutter while playing and sound effects were lackluster as well. Nothing detracting, but nothing impressive either.

Gameplay is where this game shines a little brighter.  Placing buildings is easy, especially with the oncoming path of the next wave being displayed in between waves allowing you to more effectively defend your tower.  The accuracy of the friendly AI is questionable, but may be on purpose as you take control of the different building, each with a slightly different firing mechanic which does take a little practice to master.  Enemies come at you with differing speed, tactics and durability and quickly make this game a challenge at later levels, though never feeling unfair.  Sometimes I did feel like enemy pathing was a bit jerky and I missed shots not because of inaccuracy but because enemy interactions with the terrain made them move on odd ways.

I wish this game did have a little more visual appeal but as I progressed I did have a little more fun and the game only has 10 levels so it can be beaten in under 2 hours.  I think a few buck less would make this game a more valuable experience.  Once you beat the 10 stages there is little reason to go back and replay unless you are a perfectionist and want all the 3 stars per level.   All the foundations are here for a great game, but it just missed the mark in most areas and had me wishing for a more polished experience.