This is a turret shooter with a few added mechanics that don’t really make it stand out from its many competitors.  If your in the market for a budget shooter, this probably still won’t tickle your fancy. 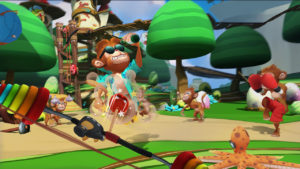 Ace Banana’s introduction sets up a world full of intelligent bananas and evil monkeys and it’s your job to protect defend your fruit.  This game looks like a cleaned up and polished PS1 game.  Environments are brightly colorful, but essentially static so it looks pretty at first, but flaws quickly show.  Enemies don’t look any better, though they animate well, faces are nothing more than jpegs mapped to a body.  They don’t change! Everything is very cartoony though animations are clunky with monkeys and other enemies sliding across the ground as if on ice.  It’s not just not that fun to look at after a while.

Sound fits fine with this game.  It doesn’t stand out as anything more than average.  You won’t really notice it, but it won’t detract either.  Typical of the genre, effects repeat themselves often and you may find yourself getting sick of the sounds of incoming apes. 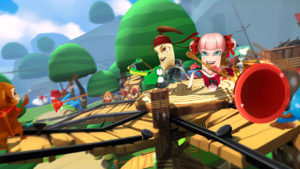 I find these bananas creepy looking, like they are staring into my soul with those lifeless eyes…

Utilizing 2 PS move controllers this is an archery simulator so hold your bow up with hand and draw your arrow back with the other.  When it works, it’s fun…it just doesn’t work that often.  Besides the game mis-mapping my hands forcing a game restart (repositioning didn’t work) the arrow mechanics combined with the environment and enemies feels rushed.  I often found myself missing far away targets due to game mechanics misleading me as to where my arrow would go.  Depending on the level, you can jump around to other areas to get different views, which helps a little, but environments and distance still get in the way.  Enemies appear out of thin air and disappear the same, taking away your precious bananas, and once you are out, you lose and start from scratch.  With all of that, long term play will tire out your arms as well, not making this game any easier. Losing feels like the games fault, not yours and that is frustrating.

That’s 2 in row for Oasis games and while this is a teeny step up from the other Turret Shooter(Pixel Gear) they have published, I still can’t recommend it.  There are a few other superficial elements to this game as well, but they just add to the tedium as opposed to fun.  Look elsewhere for your shooting experiences, this isn’t a good game and an easy one to not recommend.

What would I pay? $5 at most. This feels like a bad game got ported to VR.