Trover Saves the Universe is an almost one-of-a-kind platformer except for one other title…Conkers Bad Fur Day.  What Conkers did for us all the way back in 2001 was bring some adult humor to a classically childish genre and spice it up with some language and mildly explicit situations.  Trovers takes clear inspiration from Conkers but doubles down the crass humor and language by incorporating the comedic stylings of Justin Roiland, the man behind Rick and Morty and the VR title Accounting Plus, giving us what is arguably one of the most original titles I have played in a very long time. 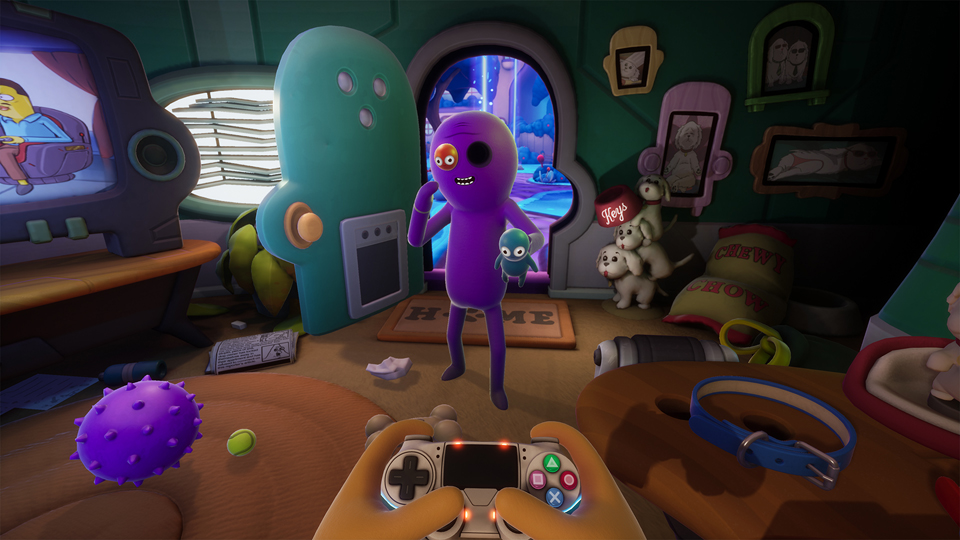 You and Trover are gonna become good friends!

The DS4 is your only option here and it’s easiest to compare the platforming controls to Astrobot.  The platforming feels very refined as you take control of Trover and guide his every action.  You don’t play as Trover, you play as a Chairorpian, whose dogs have been kidnapped by a rogue Abstainer, a giant being who is using your puppies to ruin the universe.  Thanks to some shared power babies…little beings that Trover shoves in his eye sockets, you are linked together and in VR, that gets interesting.  You are in control of Trover and while he moves around map in traditional 3D platformer action, you need to travel the map by node point, which trover must be on to sync up.  If Trover moves to far away from you, he can’t move any further, so you need constantly move forward with your 4-eyed friend.   This creates an odd juxtaposition between Trover, who has full freedom of movement and yourself as you rely on teleportation and click-turning to move around with no option to change how you move.  As you progress through the linear campaign, you unlock new abilities for Trover like double jumps, quick rolls and upgraded attacks with his laser sword.  You also get the benefit of upgrades with the 1st one letting you change the height at which you view the map and later ones that allow you to grab and manipulate objects which forces you to work in tandem with Trover to defeat enemies and solve puzzles. 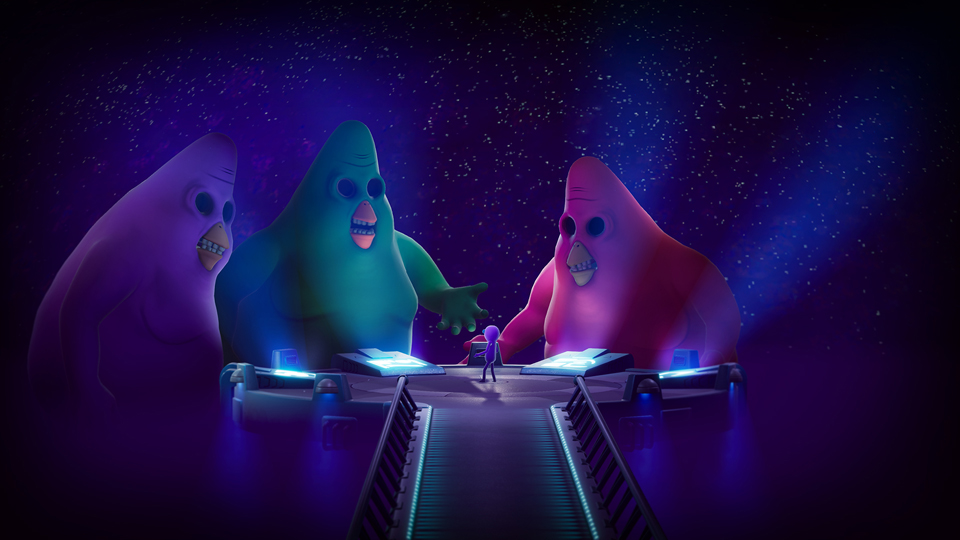 Meet the Abstainers…they are weird.

Trover Saves the Universe looks really good in the headset…like surprisingly good.  Trover and much the NPC’s you meet don’t really carry a ton of detail, but because of that, even when people and objects are at a distance, they still look very clear.  As this is a Justin Roiland vehicle, everything is cartoonish and very VERY familiar to what we would see in Rick and Morty making this feel like an off-shoot story set in the same multi-verse.  Levels are loaded with destructible plants or other stuff which may contain some errant health and each stage has its own theme, in traditional platformer fashion.  Those themes are unlike any you have seen before with stages looking very alien and sometimes very disgusting, like Flesh World, a world comprised entirely of skin and body parts, which is as gross as it sounds.  Everything animates wonderfully and feels alive thanks some solid use of textures and the variety of enemies from little weird looking mushroom creatures to smaller cloned version of the Abstainers keeps the game feeling fresh. and when anyone talks, and everyone does, their mouth animate exactly as they would in Rick and Morty, perfectly in sync with their voices making this feel as much an interactive cartoon as it is a video game

The platforming is solid and the visuals are on point but the star of the show has to be the audio which is non-stop throughout the 5 hour-ish campaign.  When I say this feels like an extended episode of Rick and Morty, it’s because this never let’s up.   Assuming you dig Roiland’s mix of dry sarcastic wit, improv and jokes that go on way too long, you will be in absolute heaven here.  Trover constantly commentates his own actions, gets very excited when you find a power baby and questions almost every one of your actions.  Enemy troops spout out one liners about kicking your ass and usually say something just as funny as you beat them down or when they die.  Every voice is unapologetically Roiland and his TV cohorts with one or 2 smaller celebrity cameos thrown in for fun.  Many scenes unfold live with you still in control of Trover and don’t stop until whatever NPC is talking to you just starts making fun of the fact that you are just hanging around listening and starts insulting your efforts and intelligence.  That may not all sound appealing to you, but Trovers contains hours of dialogue that is sure to keep any fan entertained for way longer then would be expected.  There is a censored option but don’t let that fool you as all this option does is bleep out the F-word but still lets all the crass humor out in full force making it either a mistake or light commentary on what media censors in the first place…I’m not quite sure which one. 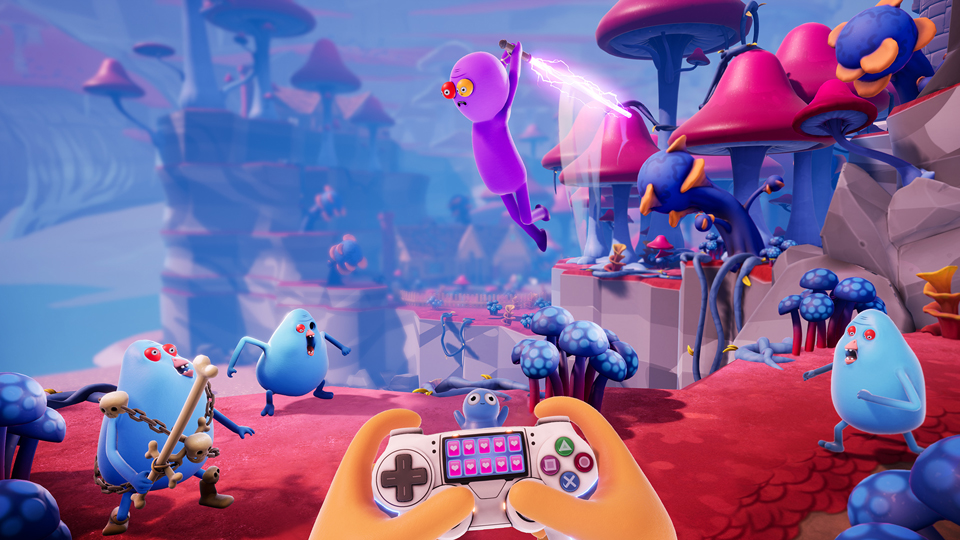 The combat is very satisfying!

For as much as I love about this game, there are 1 or 2 missteps.  For starters is the node-based way you are forced to move around the map which never truly felt natural to me.  Many times, I pushed Trover to the limits of our range forcing me to double him back to the nearest node for a quick teleport so I could press on.  By no means is it a broken system, and it’s utilized quite well in some cases, but I do wish we had a camera system that just followed Trover as opposed to what we have here.  Secondly would be your body, which I found got in the way when trying to look at and use your own powers later on.  I love having a body in VR, but when it gets in the way of what you are trying to do, that’s just no good.  I also found jumping to be a little finicky as my view angle didn’t always help with the larger jumps, but after a while my brain, and some ability upgrades, made these jumps easier and easier.  Those are minor complaints when compared to the overall package and the little VR extras that help immerse you in the game.  You are a character not just along for a ride and many characters talk directly to you and wait for your response by nodding yes or shaking your head no.  When these come up, how you respond too a question might just change up the dialogue, but some situations in the game will give you entirely different outcomes based upon your choices which typically leads to comedic situations no matter what you pick.  Bonus power babies are hidden in each stage which not only increase Trover’s heath when you accrue enough but apparently unlock some bonus end game content which I admittedly, have not unlocked…yet. 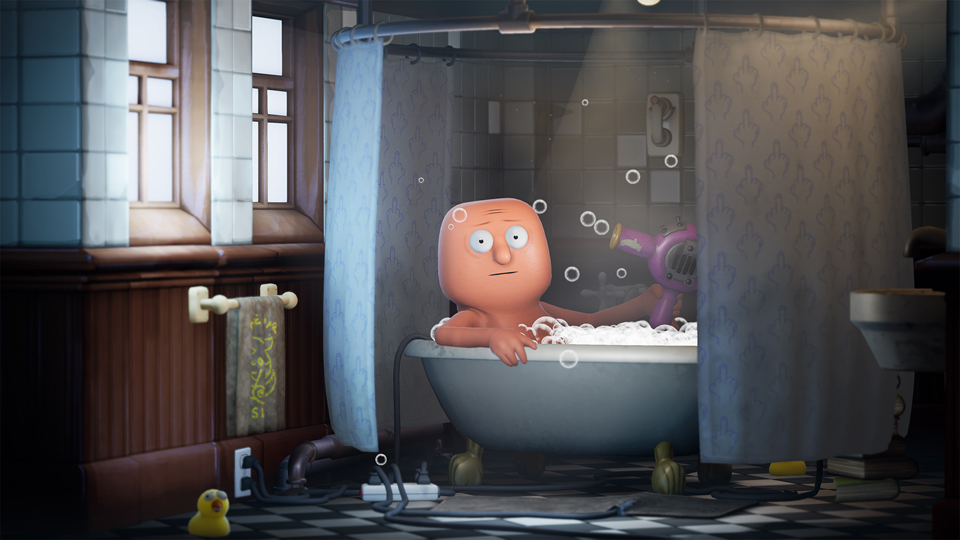 Trover delivers a top-quality experience in (or out) of VR but is made better by playing in the headset.  The visuals pop, the comedy is all over the map from childish, immature and witty and for myself most of landed and I was laughing all throughout the game.  The platforming is solid, the performances are great and the story, though nuts, is a good one.  Above anything else though, Trover constantly keeps you engaged whether it’s hunting down power babies, enjoying the skits and story or just having the world and characters instantly react to what you are doing.  It may not be for everyone thanks in large part to the brand of humor, but even discounting that, Trover Saves the Universe is a great platformer with a surprising amount of charm…and fart jokes.

What would I pay? $30 US….sold!  This a great deal for a great game.  The complaints on this one are minor and made almost moot by the sheer amount of polish and Justin Roiland insanity.  Easily one of my favorite VR experiences of 2019.