Lost your brother in a strange Egyptian temple? Than look no further than Tomb of the Golems.  Comprising of 6 quick levels which basically boil down to 6 boss bottles.  Armed with a magic staff, you “adventure” within a small area and have to destroy the enemies placed before you, with each level getting slightly more difficult than the next. 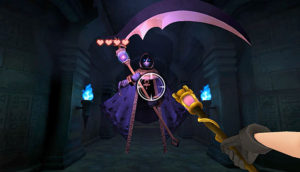 That’s not a Knife….oh wait, THAT’S A BIG FREAKING KNIFE!!!

Graphically, this game is on the anime cartoonish side having you faced up against Egyptian deities culminating in a final battle against a massive golem.  The look of the games lends to its beautiful presentation, crisp, clean small areas are rendered with great detail. The visuals are a delight.  The audio also does the job, especially in the levels where enemies are all around you.

Gameplay consists of you rooted in one spot with a full 360 degree view with a staff that requires a quick recharge between shots, and that’s where the game gets difficult as missing a shot not only keeps an enemy alive, but allows them to swarm on you causing you damage.  Missing shots becomes less and less of an option as the levels get more difficult so make sure your timing is down.  It’s fun enough and some bosses offer enough challenge that defeat has you wanting to beat them just to prove you can beat them.

The downside of this game is that it is only 6 levels, really only 5 considering the 1st level is nothing more an intro, which means that at $5.79 you are paying more than a $1 for each boss.  Basically this game is lacking content.  For the experience you get, however polished, this game should be a few bucks cheaper.