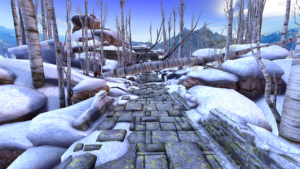 Look ahead or look out!!!

If you have played Temple Run or any endless runner before, than this game will be very familiar.  You only need the headset to play, but I recommend a Bluetooth controller.  Headset controls require you to swipe on the touch pad in one of the 4 directions to move accordingly, but seem to be a little slow when swiped, often leading to mistakes or death.

The visuals are the same as the non VR version, maybe with increased resolution to accommodate the much larger viewing area.  A running theme with endless runners (see what I did there) in VR is the uselessness of making them VR in the first place.  All the action takes place straight ahead of you and any glances from that direction result in death, so although you have a world look around in, anything more than a fast glance results in death.

The challenge of getting further and further in this game is hindered by the native headset controls and the visuals themselves lending to a tougher game than it should be.  The game looks fine enough and the draw distance is far enough so that you can see upcoming obstacles coming.  It’s a fine enough experience and if you are a fan of endless runners, you’ll probably enjoy this, especially considering the free price tag.  But if you are willing to spend some dough, I would recommend Into the Dead instead.