Stifled is not what I expected. This is a first-person game with no combat and an emphasis on stealth.  What makes this stand out from the crowd is both the story and the singular mechanic used to navigate a large portion of the game.  The “story” is the trauma of real life stresses on a man named Dave (I think) and how his subconscious deals with those problems…at least that’s how I interpret it.  Stifled is something I have never played before in any game, but in this case, that’s not entirely positive praise. 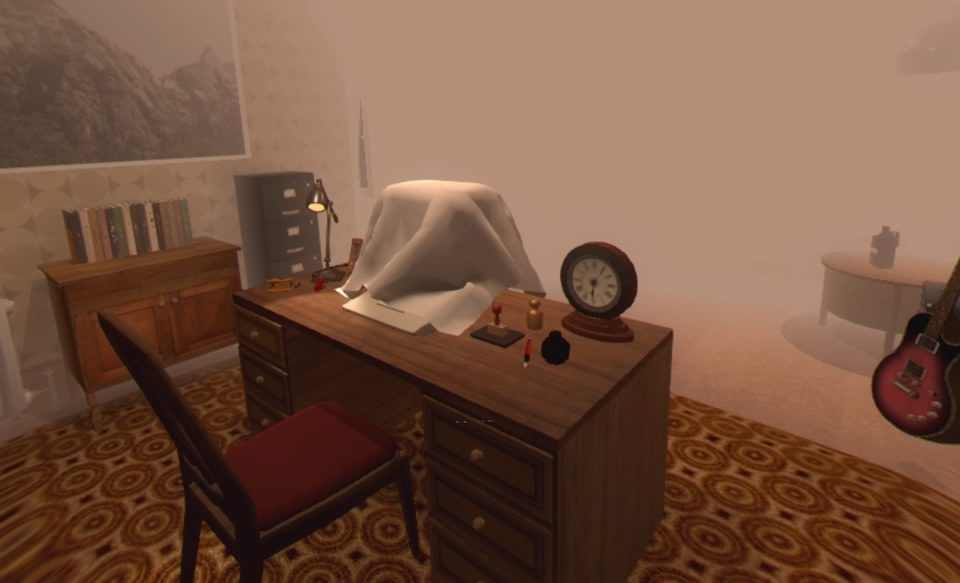 Breaking it down to something comparable I would say this play very similar to Here They Lie.  What I mean by that is you have no attack ability and when trouble arises, stealth and diversions are your only defense.  Using only the dual shock controller, this plays like any traditional FPS (minus the ‘S’).  You can explore environments, some littered with real world items that you can check out; notes to read, a picture to view or some items that trigger audio flashbacks.  There are also a lot of items to view that have no bearing on the story and are there solely for the purposes of immersion.  Outside of the real-world levels are where the games outstanding sound mechanic is utilized, excluding the introductory stage.

Noise is a major gameplay element in Stifled that works wonderfully in VR.  In these stages, you can toss items or make real world sounds utilizing the built in headset mic to display the world around you.  With the levels being bathed in complete darkness, your only way to navigate is by a sort of echo-location where a sound wave emanates from a thrown object or your own noises.  That wave outlines edges with white lines, which contrast your all black surroundings.  The louder the noise, the further you can “see” and the easier it is to navigate. Your surroundings are only highlighted for a few seconds so you’ll be making a lot of noise to make your way around some the larger stages.  Enemies also use this mechanic, some make noises, some are silent and all need to be avoided lest you “die” and restart from the last checkpoint. 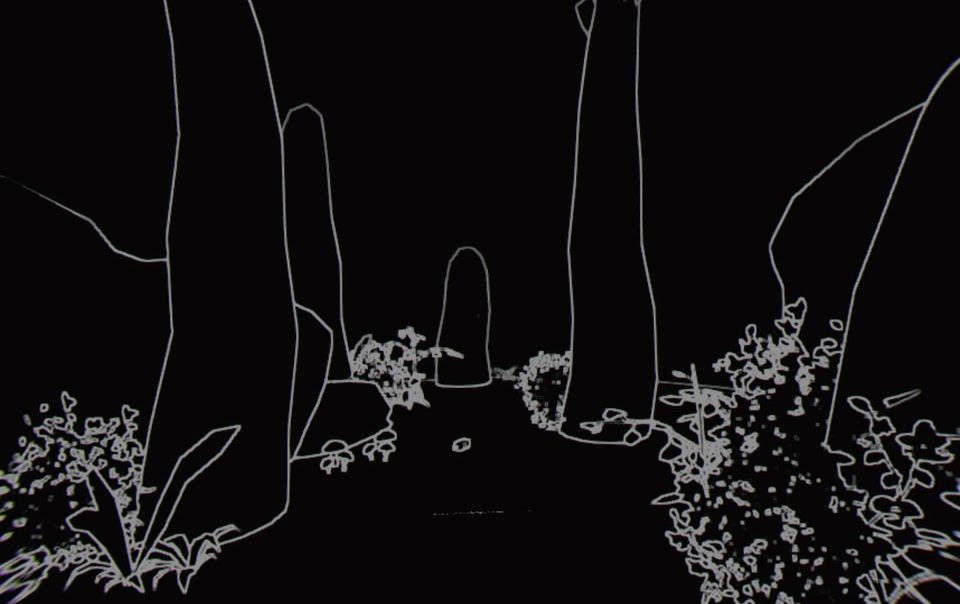 The real world has never looked so minimal!

The core mechanic at play is stealth and diversion.  The first enemy type you encounter is grotesque baby-like creature that rushes right at you if he hears you, which includes your steps.  Crouching silences your steps on most surfaces, but metal surfaces and water still give off noise.  Rocks and other items are scattered around each stage and can be tossed to see where you are going if you don’t want to constantly be making real life noises.  Tossing these within an enemy’s hearing range will also cause them to head toward the source of the sound, allowing you to sneak away.  It’s great gameplay element that merges reality and gaming, provided you want to play making our own noises.  Regardless, it’s a unique mechanic that adds a new dimension to the stealth genre.

The game is broken up into 2 different worlds; the real, and the subconscious (I think) and most of the actiony bits takes place in the latter.  It can be absolutely unnerving to be creeping around in the dark knowing full well that too much noise could spell your doom.  The real world is more focused on exploration and finding clues to your life’s more stressful problems like having a child, as well as a few more that I won’t ruin here.  It’s a linear story that supplants some very cool imagery to some of life’s issues, provided you can relate to said issues.  I can’t say that I have had the misfortune of experiencing any of the topics covered here, so while I did appreciate the not so subtle symbolism, I couldn’t really keep up with the emotional journey this tries to convey, but to each their own on that point.

The real world looks okay, though I wouldn’t call any of this portion of the game anything special.  It’s not awful by any stretch but is limited to a handful of locations and mostly involves finding an item or triggering an event to press the plot forward.  The ‘dark’ stages are where the game shines (bad dum dum) and while not really mind blowing in any way, offers some very minimalist visuals to maximize the gameplay. The contrast between this light and dark sections looks great when they are combined and overall, I’d say I was happy with the visuals presented here. 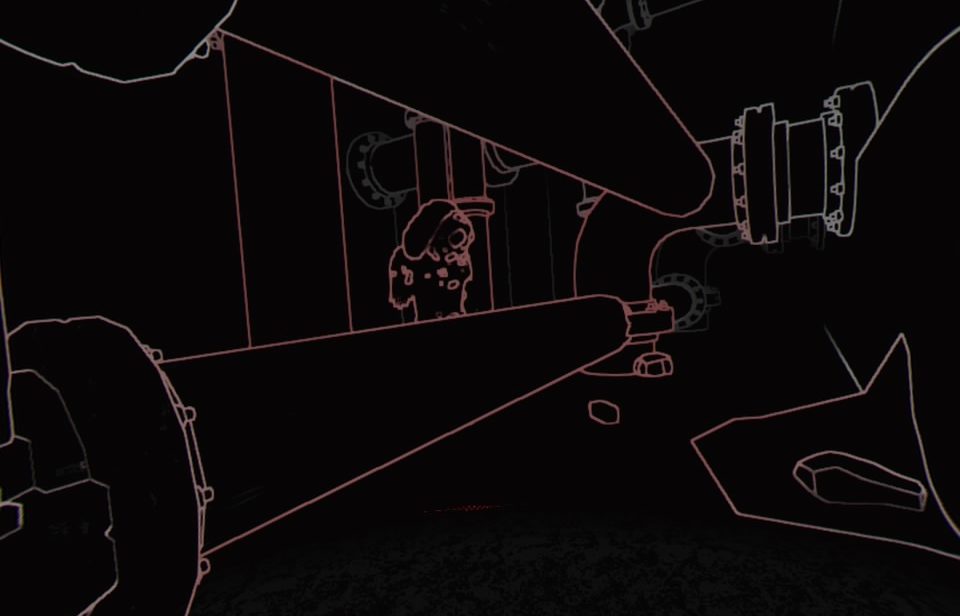 See that mass behind the pipe…that’s how this dude’s subconscious thinks of babies.

Water is big factor in many portions of the game as stealth just isn’t possible when you trudge through shallow pools. It’s here where you better have a rock handy or you’re going to be in trouble very quickly.  Some stages have some mild puzzle solving, but that mostly just involves finding levers or valves to access the next section of a level.  Besides the notes and pictures are dolls that can be found throughout the game (some hidden and some not) that provide additional information about your characters life events.

I did have an issue with the attacking “creatures” as they never really seemed to kill me.  The first enemy I encountered did end my life and force a checkpoint restart, but after that, it seemed kind of random where I would alert an enemy, it would come running at me, attack me, my screen would go red, and then nothing.  The creature just walked away allowing me to escape and proceed with the level.  This occurred only on the 1st and 2nd “dark” stages and took away from the games’ survival aspect as I knew that I could just carry on without worry.  Though the games overall story and gameplay is relatively balanced, some stages just felt a little extended by both the slow pace you walk and just how much walking you may be doing. 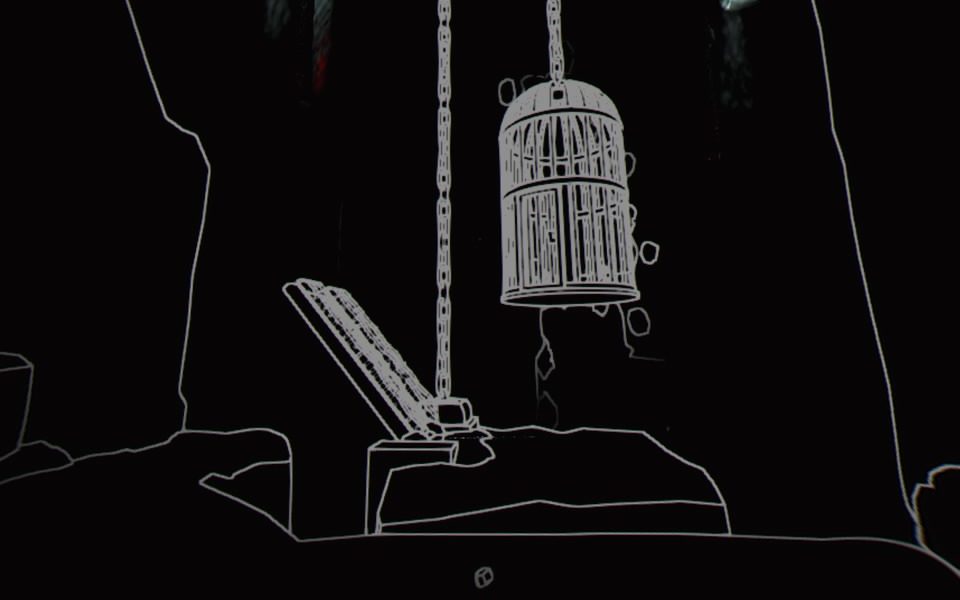 Keeping in mind that this is happening is someone’s head, this guy has a few issues.

Not much more to say here really, the latter stages get very surreal and were some of the more enjoyable moments of the game.  While the different enemies react differently to sound, the core mechanic of evade and distract is how each one is bypassed and by the end of my play I was a little tired of those sections and was more focused on seeing the story to it’s somewhat confusing conclusion.  I enjoyed this, though I think my detachment from the core events that are the heart of this game prevented me from being fully invested in the story.  Still, if you are looking for a different kind of survival horror type game, this does stand out on its own.

What would I pay? $20 is fair ask.  There is 4 to 5 hours of gameplay here which is lengthy for a game of this type.  The original mechanics and story also make this feel fresh though people who can’t relate to the issues addressed here may be left feeling a little wanting.

Gattai Games provided theVRgrid.com with a review code for this game and, regardless of this review, we thank them for that!