A Wake Inn is a unique horror puzzler that flips VR on it’s head by having you play as a sentient mannequin who awakens (get it?!) to find itself stuck in a wheelchair, only able to move your arms.  What’s worse, you are in a dilapidated and creepy hotel that has clearly been used for purposes other than room and & board and in order to find out who and what you are and who is behind this whole crazy scenario, you’ll have to puzzle and fight your way through some very unnerving settings. 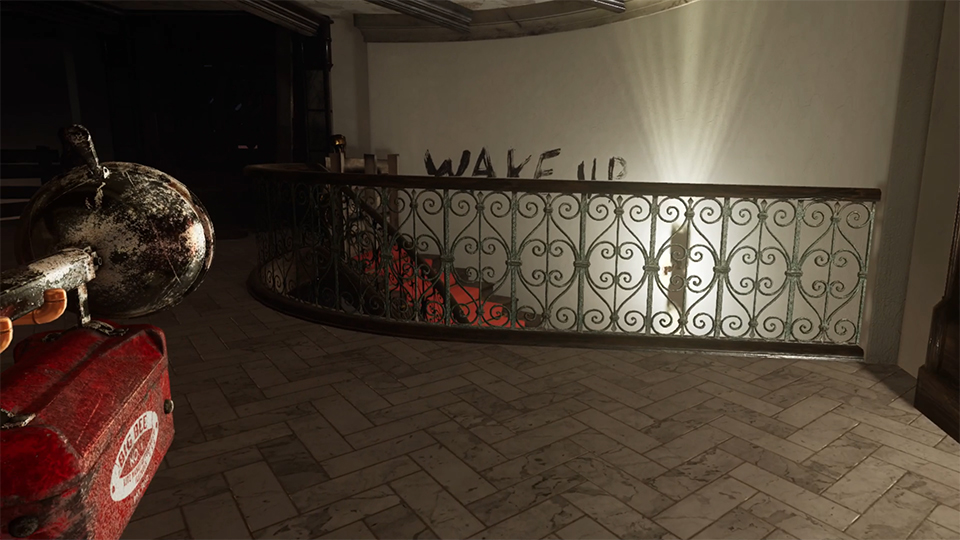 Things are definitely not right!

I praised ‘The Last labyrinth” for it’s unique, though crazy underutilized, use of a wheelchair in VR with A Wake Inn embracing that limited form of locomotion.  If you have been in a wheelchair, this controls exactly as you would expect including all the awkwardness of turning, especially in tight areas.  I don’t mean that as a detriment to the game as I found navigating by wheelchair to be quite intuitive.  Still, for those that don’t want too constantly be pushing and pulling at their wheels, your chair also comes with a mounted joystick which you can grab and use to cruise around and works wonderfully.  This is a much slower way to travel and in intense situations, you’ll have to grab those wheels for some extra speed as you flee from an incoming threat.  Comfort options are available as well, including teleportation, should you need them.  Threats come in the form of other mannequins who patrol the hallways and if they see you, pursue you and kill you with their weaponized extremities.  Stealth elements are at play, but early on you’ll pick up a weapon you can use should combat come your way with the only way to kill the other puppets by smashing the power supply on their back.  Puzzles are still the core of this game as you’ll have to solve simple ones by replacing broken parts to much more complex ones that will require a little brain power to figure out.  On your lap is a cigar box that acts as your inventory though can only fit what can actually fit inside it, so you’ll have to be careful with how you place items in there lest you run out of room. There are also additional hangers and compartments on your chair to accommodate the more permanent items you’ll need throughout the campaign.   Your hands can be swapped for grabber arms to help with reaching those items just outside of your arms length and a flashlight found early on let’s you shine a little light on the dimly lit rooms and hallways you’ll be creeping through.  That flashlight has the WORST battery life of any electronic so it needs to be used sparingly though you will find plenty of batteries hidden in drawers and on shelves throughout the hotel.  All this is combined into making a game that keeps you on your toes (or wheels) while cautiously looking around every corner for your next clue or foe to avoid. 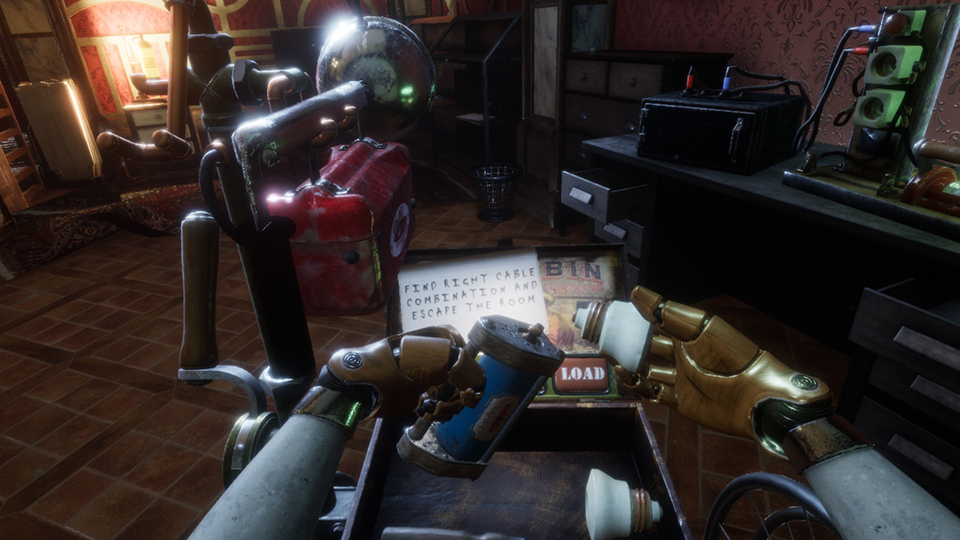 I really enjoy the inventory system in here!

A Wake Inn is a hauntingly beautiful title that shows off just how good a game can look in VR.  An opening (and bizarre) tutorial has you in a large empty room bathed in almost complete darkness while a bodiless voice guides you through the controls.  Soon enough you are in the hotel which looks like a building you might see from more than a few decades ago though neon signs on neighbouring building seen through windows hint that this takes place in a more modern setting.  The hotel has seen better days with items scattered and strewn about in almost every room you visit and other then some errant notes that give a little backstory to your surroundings, it feels as though this place has not been lived in, in sometime.  Machines with brains in them and security cameras made from actual eyeballs immediately let you know that this is no ordinary horror story and the deeper into this rabbit hole you go, the more bizarre things get.  A very slick feature is the film projectors found throughout the hotel which let you watch short films from a hundred years ago and while most don’t really seem to have too much to do with the story, it’s cool to see the dawn of modern-day cinema in this manor.  Lighting effects are nothing short of perfect though the lack of light makes the importance of your flashlight all the more apparent and adds a wonderful sense of dread and foreboding throughout the campaign as even when you KNOW you’re safe, there’s always that darkness and thus the unknown that is always looming.  I would go so far as to say that the presentation borders on near perfection save for 2 major issues.  The mannequins you face look stupid, or rather, they look great, but animate so senselessly that it looks as if the dev just gave up and instead of properly animating them, just had them float around the hotel as if on an invisible meat hook.  In all honesty, I thought I was playing an early version of the game and quit back to steam to ensure I didn’t miss any crucial updates…sadly, I did not.  The second issue seems like an optimization one as the game’s framerate drops to near zero when live loading new areas and even stutters if you turn too fast causing some crazy jerky moments as the game catches up to itself and could cause some discomfort for with delicate constitutions.  Those 2 visual hiccups aside, A Wake Inn delivers a visual quality that we just don’t see enough of in our HMD’s and I found myself on numerous occasions just stopping to admire the attention to detail on display. 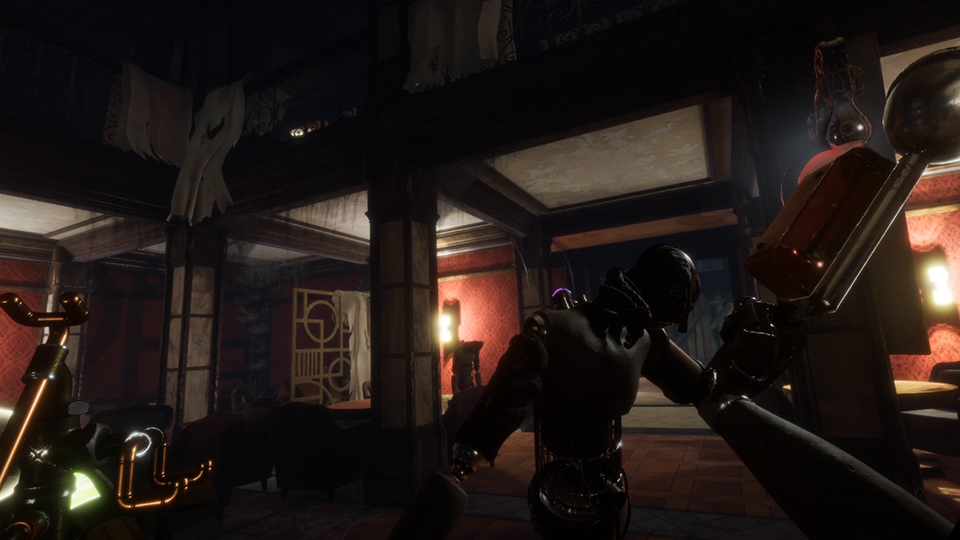 The mannequins you face are no real threat!

Matching that visual quality is an equally disturbing soundtrack and atmosphere that exudes the feeling like I’m playing through a Resident Evil game.  3D audio is here and awesome, with every creak of the hotel floor boards and more bizarre stuff stumbled upon hammering home that the developers were going for AAA presentation.  Taking a page out of the Bioshock playbook is a walkie-talkie you find with a man on the other end commenting on the rooms you enter and helping guide you through this large building and the fact that he can see where you are via walkie should hint that there is plenty more here than what meets the eye.

A Wake Inn boasts a 6 hour + campaign which also commendable as many VR titles tend to go for games in the 2-to-3-hour range.  With that said, my initial hour in the game was met largely by frustration as what was being asked me was very unclear.  In your little cigar box is a memo with your current objective but it’s not always clear how to accomplish that objective and in one instance, it didn’t update after I completed my task, forcing me to wander the hotel without any guide save for my wits.  Enemy encounters are also hit and miss as the rag-doll physics at play make every fight a chore as you and the enemy flail wildly at each other until an errant hit finishes them off or you just take too many hits and perish.  Should you die, you’ll be placed back at your last save.   This is also problematic as the game, with the right options selected, lets you save at anytime and load that save at anytime as well.  The problem with that is there is only one save slot so if you mess up and hit that button by accident or just pick a bad time to save, you’re screwed.  For the most part it works just fine and that ability to save at anytime allows for trial-and-error tactics when challenging enemies, but it can be annoying as well and a complimentary auto-save feature could go a long way to alleviating frustration.  It’s also very easy to miss items as the game lets you move anywhere in the hotel provided you have the means to do so but key items needed to solve puzzles or defend yourself can be missed because the game just didn’t guide you there or let you know what was needed next, forcing back tracking and exploration of areas that you aren’t being told to visit yet.  I don’t mind games that don’t hold your hand, especially puzzle games, but it just feels like A Wake Inn is a little too freeform than it lets on and definitely led to some frustrating moments for myself as I back tracked searching through every drawer in search of a needed fuse. 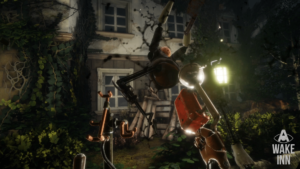 It really is a gorgeous game!

A Wake Inn gets plenty more right than wrong but some of the game design choices and optimization issues may be enough for some people to throw in the towel early.  Hopefully those problems can be remedied in the near future as it’s one of the prettiest and immersive games I have played in recent memory.  The story is creepy and macabre and the atmosphere in this hotel only gets more disturbing the further you get in the campaign.  For those who dig suspense, horror stealth and some light puzzling then A Wake Inn delivers where it needs to, it just needs some fine tuning.

VR Bros provided The VR Grid with a press code for this title and, regardless of this review, we thank them for that!