I’ve heard many people ask for more physical VR games and experiences, looking to combine the fun of gaming and maybe shed a few pounds in the process.  Those with the VirZoom bike are afforded some merging of the 2, but for those of us with just a headset, there really hasn’t been too much in regard to physically demanding titles.  Well, say hello to Sprint Vector, a future sport kind of game that is far and away the most physically demanding game I have ever played in, or out, VR and for those whom that may dismay, it’s also a damned fun game. 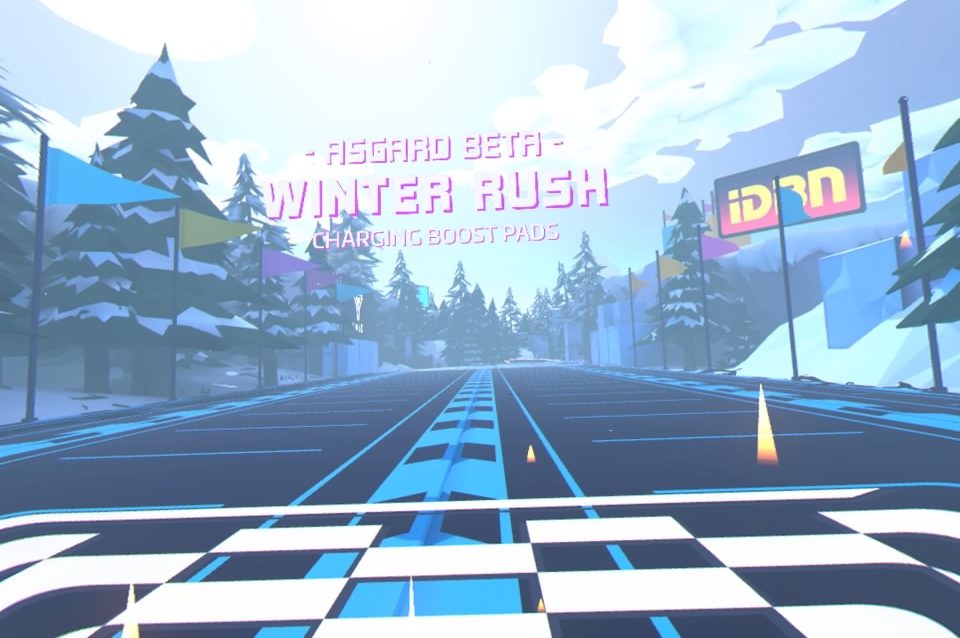 On your marks…get set…move your arms like a crazy person!!!

You are going need 2 move controllers, some decent hand/eye coordination, an okay short term memory, and the propensity to sweat a bit. Running involves swinging your arms while pressing and releasing the triggers, which is a feat on its own when you first start sprinting.  From here you also must master jumping while running, ducking under obstacles, climbing walls, drifting, turning and flying/gliding.  Adding to that chaos are weapons and power-ups that can slow down enemies or give you a nitro boost!  I’m not going to lie to you, I struggled in my initial jaunt in Sprint Vector and I feel like many may struggle like I did, but fret not as after around 30 minutes or so of playing, I began to develop a natural rhythm and flow that showed dramatic improvement from my first few races.  That said, I am still by no means an expert and still find myself struggling with the controls.

The scenario is this; you are a competitor in an Intergalactic sport of Sprint Vector and, like any sport, your job is to be the best.  The 12 race tracks take place on multiple planets across the universe and each carriers their own unique flare.  The game looks really good and though it may not carry crazy amounts of detail, the vibrant colors, large levels and the amount of stuff happening on screen makes this a delight for your eyeballs.  Character models all look good and you can pick from a variety of life-forms ranging from a lowly human to a bi-pedal hammerhead shark.  Levels range from snowy mountains to chemical filled factories and while the 12 tracks may seem a little light as far as content goes, they each contain multiple paths and areas only accessible to those who master the control scheme.

Like our other future-sport VR entry, Starblood Arena, this contains very familiar sarcastic and comedic commentary.  For the most part the 2 commentators spout out random ‘facts’ about the game whether it be an tale from a previous seasons race or some random story about a racer.  Most of the jokes kind of fell flat to me, in my opinion, but they didn’t offend or annoy and even though I began to hear the same quotes over and over, they never really bugged me.  On occasion the commentators will react to what you are doing in the game, which greatly added to the immersion factor and made me feel like I was competing in this sprinting sport. 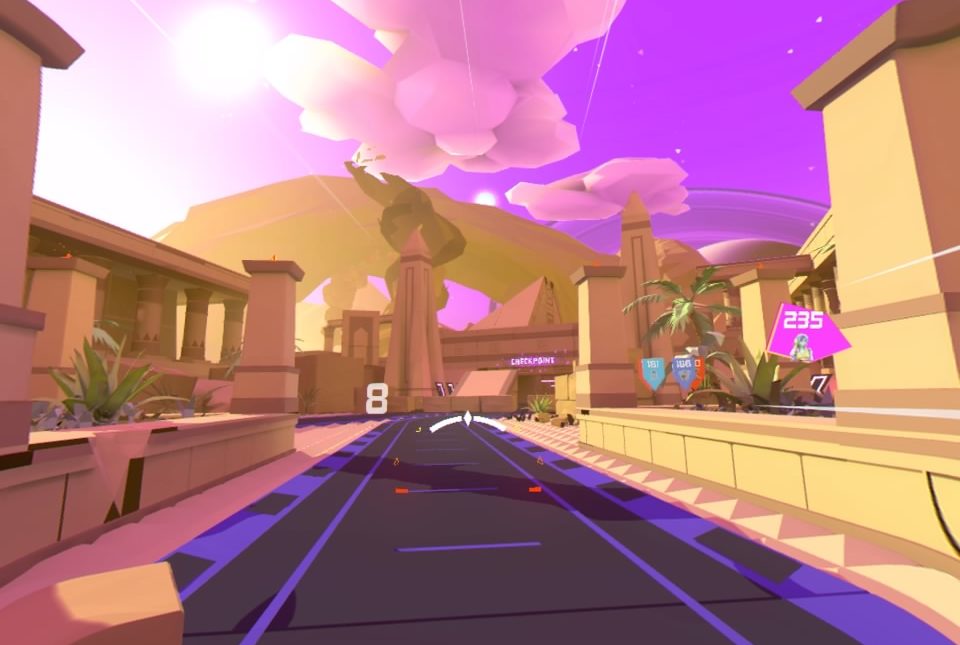 The levels are all vibrant and colorful!

There are few options available in single player mode, whether you want to race alone or against AI opponents being the main one.  Either way to unlock all the courses you must be within the top few players in each race to unlock the next.  Given the steep learning curve here, it’s a bit disappointing that this content is locked, but for those that enjoy the game, it is a great motivating factor to improve those racing skills.  There are  optional challenge maps which ramp up the difficulty with assigned tasks to carry out while you race, like collecting coins or a constant burst mode.  On the multiplayer side, there aren’t really any options beside public and private match, but what is cool is that you and up to 7 other players can play online making for some of the most intense and fun moments you can have in the game.  It’s an absolute blast to crush the real-life competition in VR.

So, now for the issues.  This game is not easy and while the base mechanics will get you to the finish line eventually, mastery of the controls is going to take a lot of time for many people.   Don’t get me wrong, what Survios has done here with the control scheme is great, super intuitive and a lot of fun, but even after a few hours of gameplay, I’m still struggling to remember what to do and when to do it.  The memorization of the control scheme the biggest slight against this game and will separate the hardcores from the casuals very quickly.  My largest issue is with the PSVR hardware itself.  To account for the lack of tracking behind you, there is a click-turning option that I just can’t get used too.  For the most part, the games mechanics of looking where you want to run works great, but every once in awhile a sharp turn greets you and remembering to click-turn is a struggle, and even when you do , it can be really hard get your bearings, often leaving you at a grinding halt while you figure out what you need to do.  It just plain sucks that there is no way around this and a shining example that Sony’s next headset needs full room tracking.  As I said, it’s rare when the game forces you to turn like this, but when it does, it stops any momentum you had in the game and forces you to get your proper bearings to continue on.  Other minor issues include the inability to adjust the AI (ie. different cup classes) and the occasional AI screw up where there travel in the opposite direction of the finish line, but given that the multiplayer is where this shines, those last 2 issues aren’t that big of a deal. 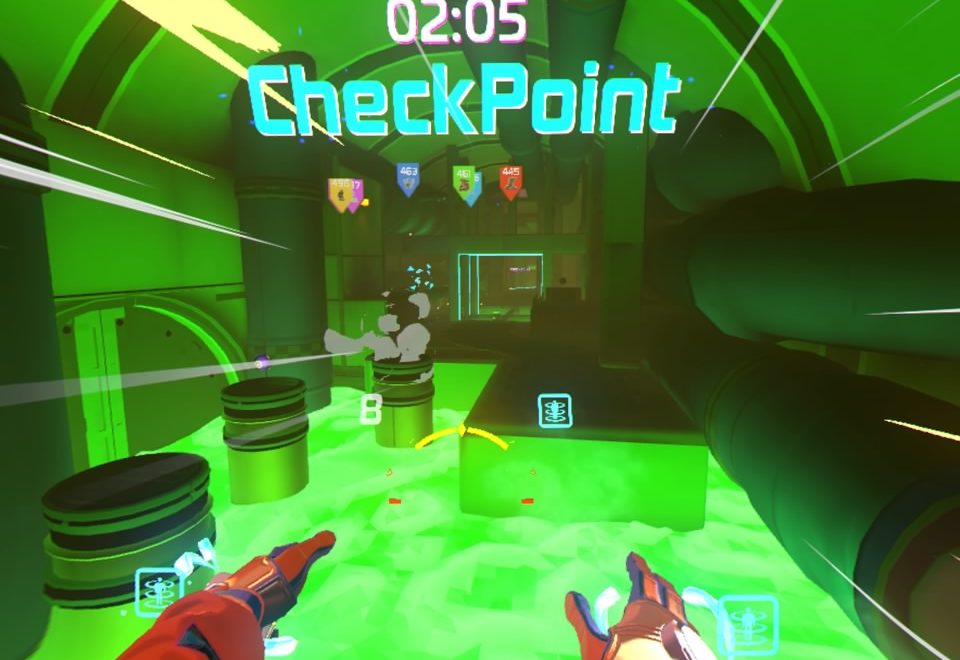 When you are racing over pools of acid, you best make sure your jumps are well timed

Sprint Vector stands out as one the most physically demanding games I have ever played, in or out of VR.  When you fall into a groove and start fluidly moving through levels, it feels absolutely amazing and while some may feel different, the added physical nature of the game makes this feel very rewarding. Throw in some online competetion in the form of multiplayer, local and online leaderboards and there is plenty of reason to come back to this for a match or 2.  Sprint Vector plays like a sport, and like any sport, it’s going to take a lot of skill and practice to get too, and stay, at the top of those leaderboards and ahead of your friends.  On a grander scale, this is the next step into the mixing the real world with the virtual and for those curious what that looks and feels like, then this is it!

What would I pay? This is a lot of fun but may not be for everyone.  For those looking to break a little sweat and have fun in VR than the $30 asking price is alright.  That said, if you prefer you games a little less physically demanding then you may want to wait for a sale before you dive into this galaxy spanning sports sim. Oh, and if you do buy it, put those wrist straps on!

Survios provided the VR Grid with a review code for this game and, regardless of this review, we thank them for that!