SONAR is another 360 video/experience downloaded from the Oculus store for $2.29.  I am all for 360 videos and am looking forward to one that utilizes VR in the right way that will allow the viewer to sit back and enjoy a story driven plot while appreciating the VR format.  This is not that. 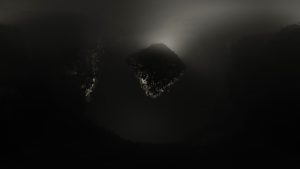 This is the best thing about this video….than it ends

Instead you are treated to a glorified turbo ride barely begins before it’s over which is a shame.  This video short lives up to that title as I had it clocking in at around 5 to 6 minutes.  It’s a First Person short and has you watching an exploration mission in space whereupon something strange happens in a nearby asteroid.  It’s a decent premise, but fail upon delivery.  My problems with this, besides its length, are the lack of any audio besides a soundtrack and a few effects sounds, and that it was actually engrossing, than it ends.

I was left wanting more, but not in a good way.  I felt ripped off.  The visuals were good enough with some very surreal imagery but just when you feel like the video is really about to begin, it ends.   Although the price is inexpensive, this feels more like a lengthy trailer than full experience and I have hard time justifying paying for a trailer.  It’s too bad really, if it were free it would be a nice little experience, but the attached price point makes this hard to recommend.