Ranch Planet is easily the most challenging review I have ever put together for a multitude of reasons but let’s get past the intro, shall we?  You can’t tell from the game but there is a story here, according to the PlayStation game page, involving a usurped King, his daughter, a tin man and The Guardians of the Galaxy, give it a read…I’m not lying.  What you actually get is a much more contained game that is basically just a twist on fishing games we have seen in the past with the VR player shooting a net gun to capture animals or the second screen player running around trying collect animals. 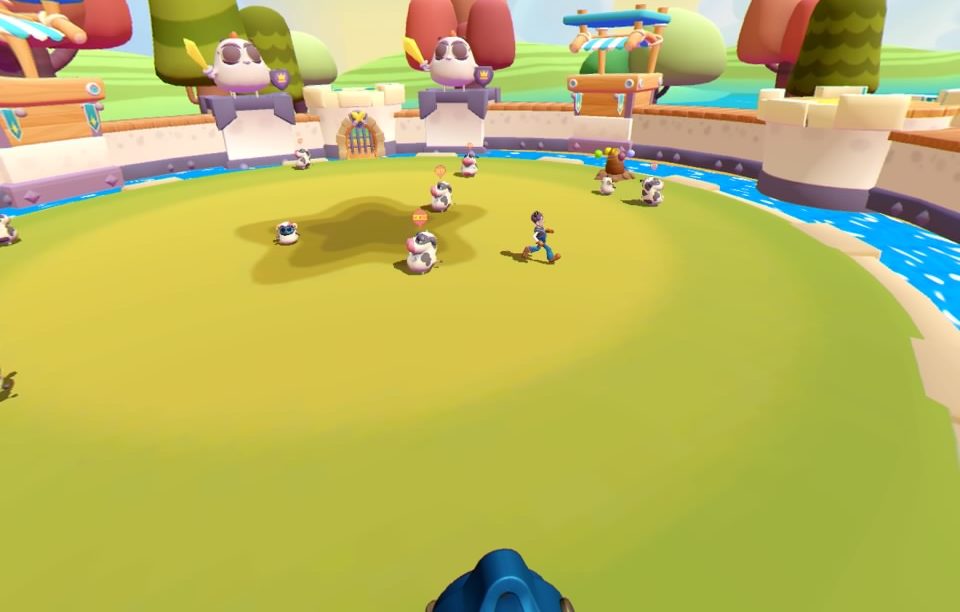 You gotta stop player 2 from collecting those animals!

The VR players controls are very simple, one hand aims your gun while the other is used to reel the line using a circular motion beside your gun ala a fishing rod.  Depending upon what mode you are playing in, you may be able to teleport around the arena type area or use special items, but the name of the game doesn’t really change…you are capturing something in a net.  The non-VR player in 2 of the modes controls another character whose task it is to run around and collect the animals wandering around and return back to the gate you entered all while the VR player tries to capture him or her.  I’ll cover each mode in more depth below but that’s the basics of controls here.

Ranch Planet doesn’t look good.  The color palette used is very bright and the character models feel as though they belong in a CG television show from yester-year carrying stiff and limited animations.  Between the 4 game modes are 2 play areas, one with cartoonish castle-like walls surrounding a circular grassy arena.  The other is along a roadway that looks like it belongs in a toddler’s theme park as it has a windmill, balloon, rainbow, tractor and a few other random, colorful things seemingly put together to make a background.  Animals move with mostly singular animation, though they may occasionally sprint and in the arena levels, a dense fog or meteorite shower will pop up mixing up the look and way the game plays.  The look of this game isn’t offensive, but it’s clearly aimed at audience younger than those who should be in VR according to headset manufacturers. 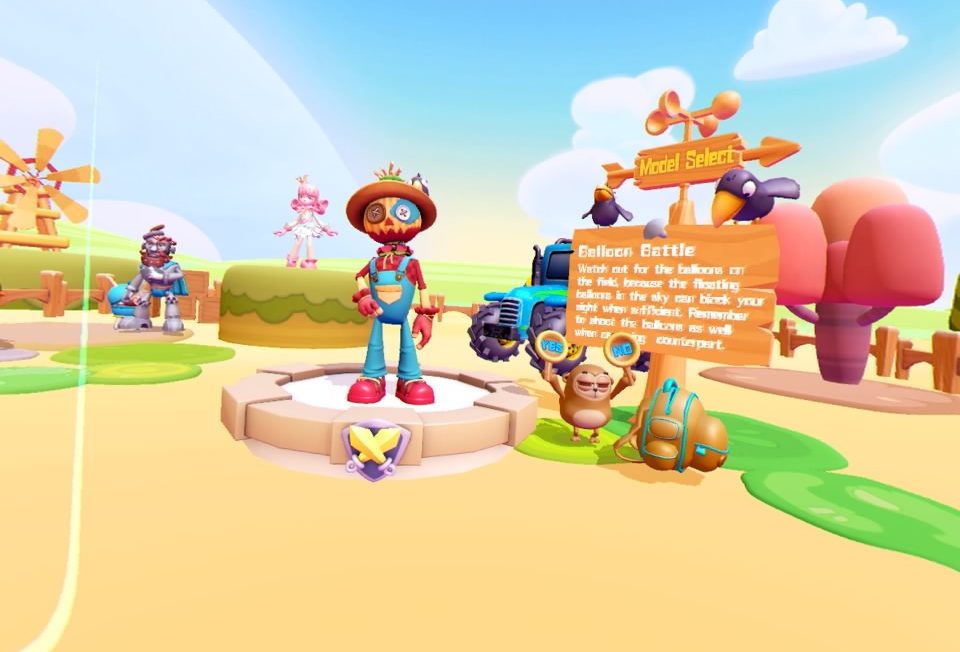 Pick your character and try and follow the those instructions

As it is with the visuals, so to is it with the audio.  Most of the game is comprised of cutesy sound effects that match what’s happening on screen.  During the arena matches, alarms will sound signalling an incoming level modifier and when time runs low in the roadway mode, a really annoying alarm sounds way to early, is mind-numbingly grating and can’t be turned off.  When those warnings pop up, a tiny female Asian accented voice shouts out what that warning is and is almost unrecognizable as English…but it is.  That doesn’t hurt the game in any significant way, but it does seem like an odd choice nonetheless.

Smartwar and Confrontation are basically the same game with the VR player trying to capture the non-VR player and reeling him in before the non-VR player collects all the animals and leaves the stage.  There a few options available to mix up the action like a night time mode where spotlights move around the stage.  Should the non-VR player walk into the light he will move slower.  Asteroids may rain down from the sky and can hit both players, easy enough to avoid for the non-VR player, but the VR player needs to look up and see where they are going to land and teleport to another tower around the play area.  Whoever accomplishes their task 1st or doesn’t die wins.  Cooperation and challenge are the other 2 modes where the VR player must capture animals walking along a path, with challenge mode being the only single player game out of the 4.  A vulture will swoop down to capture the animals making it your competition and should you both grab the same animal then the battle begins and you must reel in the animal faster than the vulture can pull it away making for an exhausting game of tug-of war.  Cooperation plays the exact same way only with button prompts appearing to the VR player that he/she must then shout out to the non-VR player who hits those buttons on the DS4 supplying ammo to the VR players gun…in theory. All of the modes mix up the action a little bit, but no matter which mode you pick, it feels like the same thing over and over quite quickly making boredom set in for either player. 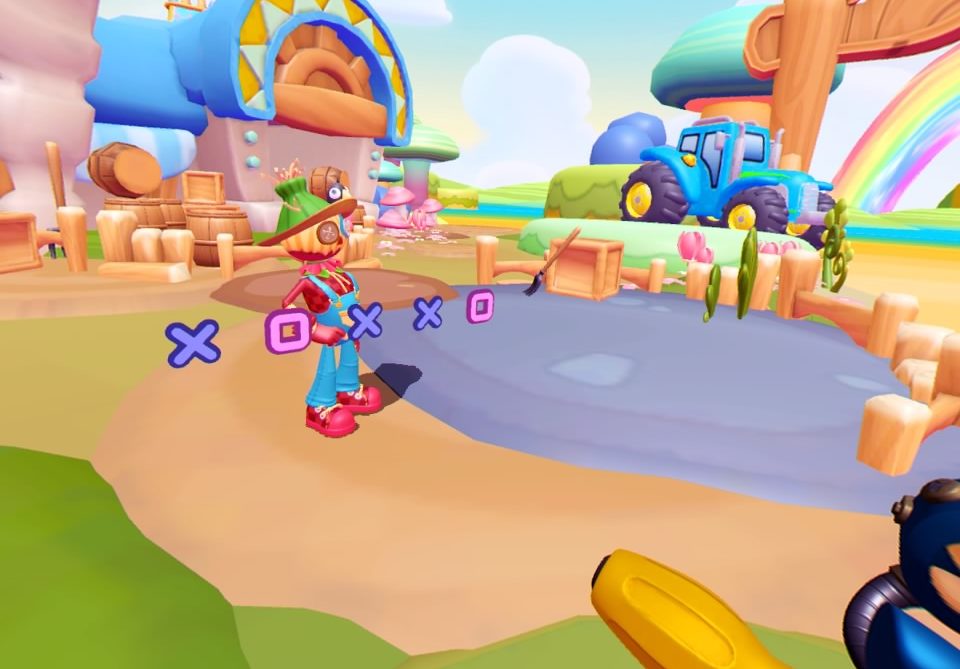 The PlayStation store lists this is a single player game, which is lie as only 1 of the 4 games available is playable solely by the VR player.  The other 3 modes require someone locally to have DS4 and play on the TV.  What’s worse is that cooperation mode appears to be busted and unplayable as no matter what I tried, the non-VR player could enter the right prompts, but then nothing, leaving the VR player without ammo thus waiting for the inevitable defeat.  When the VR player nets the 2nd player, a match ensues where the VR player must reel the non-VR player in while the non-VR player must rotate both joysticks on the DS4, which is ridiculously imbalanced.  It’s way easier to rotate the joysticks then rotate a Move controller making the VR users efforts next to futile when trying to reel anything in.  The same thing happens against the AI vulture who is next to impossible to reel in creating a not vey fun workout.  I reeled that stupid bird in once and it took so much effort I decided it wasn’t worth it to do it ever again.  It’s easier to wait until it grabs an animal, then while it slowly brings it to his nest, you can reel in 2 or 3 animals in that time.  Should you both grab the same animal you also can’t let go to take another shot, so you need to wait until he flies all the way back before you can fire again.  Lastly are the near impossible instruction in the Smartwar section that have been translated so poorly that easier to figure the game out on your own than try and decipher this code. 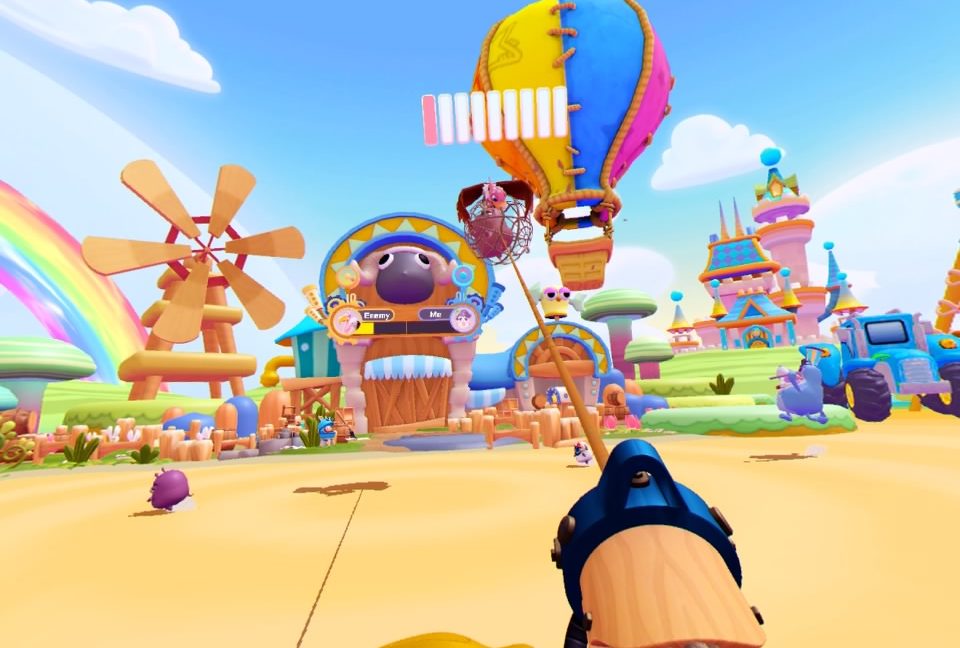 Wrestling with this bird is a chore.

If it’s not frustrating, it’s boring and like I said, I don’t think this was made with adults in mind and so I asked my 7-year-old daughter to help with the review.  In her own words she said “this game is junk”.  Now in the games defence she did have some fun but like I brought up earlier, she shouldn’t even be in the headset according to Sony, leaving me to wonder once again, who was this made for?  Ranch Planet feels like VR project slapped together without any real regard for fun and given just how limited the content is here and that 1 of the modes is broken, I can’t recommend this game to anyone…it’s just not good.

What would I pay?  Nothing.  If it wasn’t so hard to get refunds from Sony, this is one I’d gladly take back.  It’s broken, frustrating and boring and requires a 2nd player for 3/4 of the content.  If this was $5 I would be hard pressed to recommend anyone pony up that cash, but the laughably high $15 price tag is insane considering what it is bringing to the table.