2D side-scrolling beat-em ups have been a staple of gaming since the mid 80’s and have stood the test of time with even recent (re)releases like Scott Pilgrim & Battletoads highlighting that there is plenty of life left in this genre.  The typical task of cleaning up the streets from the dregs of society as ass-kicking heroes has been brought to virtual reality with you playing as 1 of 2 street fighters as you clean up the streets of Rage City! 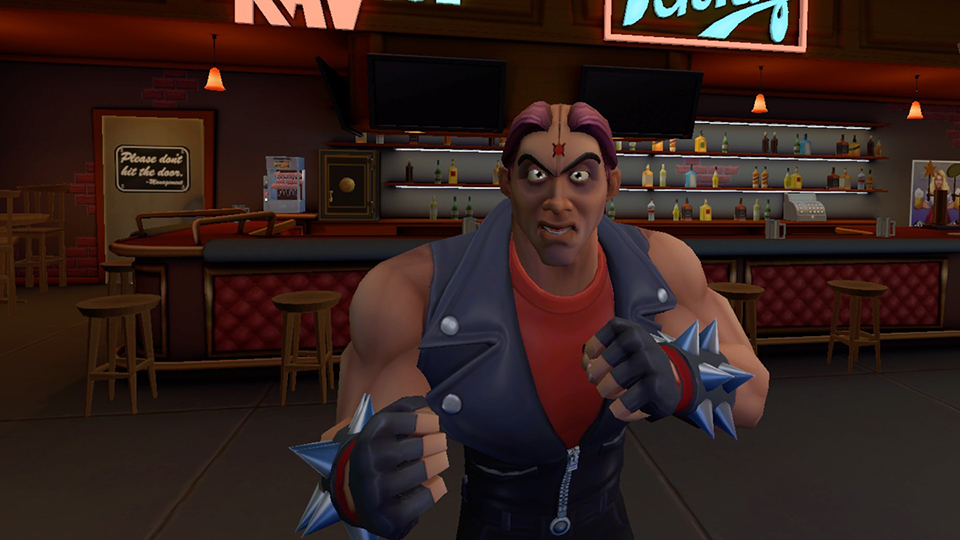 Every enemies’ face is just so punchable!

Due to the nature of VR, this is no side-scroller as you are now behind the fists, punching and kicking the baddies that come your way.  Thumbsticks let you move around the map with ease with the combat reminding me very much of Knockout League of all things. After you choose from the male or female character, you’re introduced to the combat, which let’s punch the gang members in the face or deliver some body blows.  Buttons on each controller also let you perform kicks and pressing in both thumbsticks at the same time allows you to perform a spinning kick.  Dealing out damage fills up a power meter which, when full, lets you activate special attacks that you unlock by defeating a stage’s boss.  It’s not just punching and kicking as you can pick up items scattered around the environment and even stunned enemies, tossing them into one another or into many environmental traps which typically trigger a comedic animation.  In one of the more confusing design choices, after beating each wave, you’ll have to rescue a hostage hidden in the environment by punching your way to them, then punching the bomb in their hands.  It makes no sense, but it’s often times funny where you find them.  Any individual opponent is easy to dispatch though should you get surrounded you could suffer some errant hits…especially when you start having knives tossed your way.  Bosses get nutty and crazy over-the-top, coming at you in unique ways and once defeated unlock a smaller sandbox section of that stage with a few mini games that can unlock some items in the game’s gallery.  Of course, as this is a beat-em-up, you can play online with a friend and with each stage taking somewhere in the neighbourhood of 20 to 30 minutes, the campaign, minus the sandbox stuff, will take you somewhere in the 2-to-3-hour range to beat. 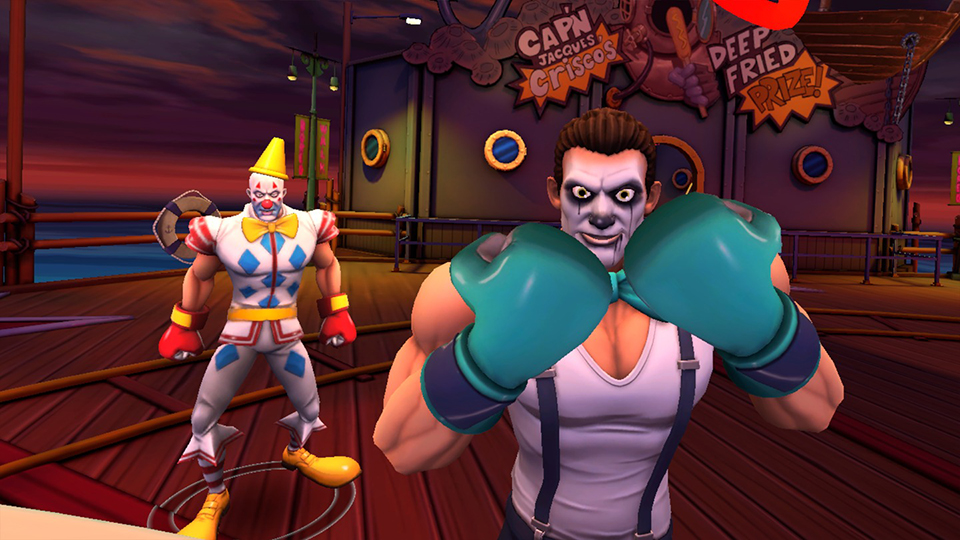 It’s like I’m fighting members of the Joker’s gang.

Taking inspiration from games of old…and probably because the Quests lack of horsepower, Path of the Warrior is a simple looking game with a very cartoonish look, not unlike 90s era side-scrollers, just with a few more pixels.  Environments lack much in the way of textures looking very flat but are often littered with thematic objects matching each stage so while they do look rather plain at times, there’s enough TLC in each stage to quickly make you forget how stark they can look.  Enemies fair much better with each level having matching gang members.  A pub has leather clad thugs, the city streets have you facing rollerbladers and the circus is littered with clowns and a few more freaks.  Outside of the bosses, the enemies you face are standard for the genre though I will admit to being pleasantly surprised by a few of the later additions which only get more and more ridiculous.  Those bad guys animate nicely, looking like exaggerated models from Saints and Sinners with some nice touches when you punch them in the face and can watch their cartoon flesh bounce around a bit. Tossing enemies into the environment can result in some amusing animations like sending enemies flying into the air, being electrocuted in a microwave or even eaten by a shark and a bunch more unique to each stage.  The boss battles are the star of the show with some pretty slick introductions followed by some fantastic encounters that might not even involve traditional combat and mix up not just the action, but the visuals as well.   It’s not the most impressive game out there, but any shortcomings will soon be forgotten in favor of just kicking ass! 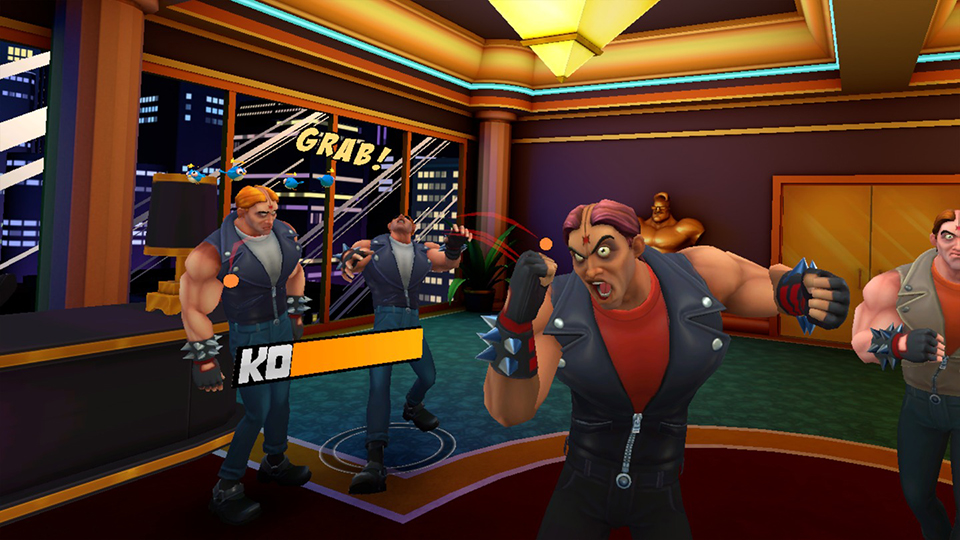 Enemies come all around you so be aware!

While I do think this is inspired more by 90’s beat-em ups, the soundtrack is all 80’s with a kick ass title track and some fun music that plays in each stage.  3D audio is present and needed as enemies can sneak up on you with the impacts of you attacks sounding pretty awesome as you thwack and bash your way through hordes of gangbangers.  Unfortunately, should you play with a pal, in-game voice chat is unavailable so you can’t speak to each without using a party chat app which could be irksome if you decide to play with someone you don’t know.

Path of the Warrior feels, in my mind, to be just about as authentic of a translation of a 2d brawler game into a 3D VR title and that includes all the good and bad that comes with the genre.  Even 30 years ago, these games were never really as fun playing solo as they are with a friend and this is exacerbated by VR.  Despite the latter half of the game doing its best to mix up the gameplay with some very quirky encounters, it still felt repetitious, especially playing alone and having a someone else by my side, delivering justice one punch at a time made the experience much more fun, despite the lack of in-game chat.  That’s not say it’s a bad game alone, far from it, but it’s just better when you are an army of 2.  The game is easier with another which is also a problem as the game is just too easy to begin with without any difficulty options to choose from so even though the encounters change up a bit as you navigate the story, without that challenge, it still feels repetitious and I would love to see harder difficulties added.  The campaign is broken up by those optional mini-game stages that task you with drinking “x” number of beers, play a variety of carnival games, an arcade game and a host more mini side quests that work better than I thought they would and were fun to tackle.  It’s a lot of fun to punch seemingly endless enemies in the face and thanks to the punch mechanics you can make this a bit of a workout if you like by putting a little more ‘gusto’ in your punches with my final note being that this is a physical game and while their are turn options in here, as well as standard comfort settings, it’s all to easy to get turned around in the real world and smash a wall or shelf if you don’t have the space. 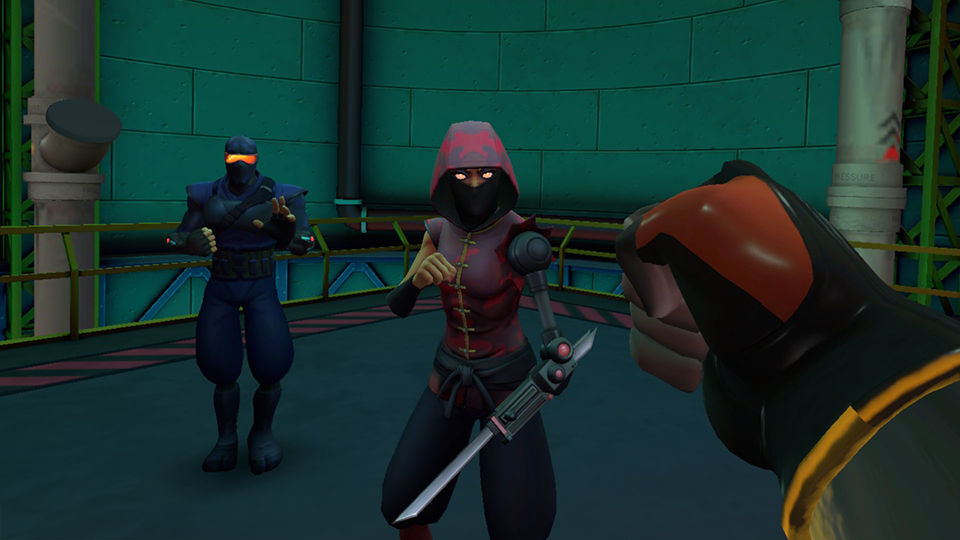 Hitting a lady is OK when she’s a Cyborg…right?!

This is basically Double Dragon in VR and it’s pretty slick. It takes that tried-and-true beat-em-up formula and translates it to VR quite nicely, but as I said it’s not without some minor issues.  Those who dig games like Gorn or Drunk’n Bar Fight will probably appreciate the campaign attached to this and while it doesn’t have the same physics based combat as those titles, it still offer some very satisfying action.  It might not be perfect but when you look at just how much is offered up in this package and on just how many levels this delivers, it’s a solid title and great game that pays homage to those classic brawlers of old.

What would I pay? Whatever issues I have with this are rendered somewhat moot by the $20 asking price on this.  For that low price you get a fairly packed little package that delivers on everything it promises and I bet will even pleasantly surprise you with the boss battles and the extras included.

Twisted Pixel Games provided The VR Grid with a press code for this title and, regardless of this review, we thank them for that!