Well well, arguably the most appealing and most controversial headset has finally entered our house courtesy of Oculus & Facebook.  The Oculus quest 2 is the successor to the original headset that released only a year and half a go and looks not only improve upon the original version in almost every way but looks to target those with VR ready PC’s and make this the only headset you’ll ever need…at least until the Quest 3 headset comes out.

For starters, I’ll cover the headset as it comes out of the box and as a standalone HMD.  Getting the device going couldn’t be much more simple as you just need to turn the headset on,  ensure you have batteries in your controllers and follow through the welcome screens.  The 1 other item you’ll need is a Facebook account as without it, you just can’t use the headset and while there are rumors of jail broken headsets floating around, at the time of this review if you don’t have a Facebook account, you can’t use the Quest 2.  The headset itself I find to be fairly comfortable though as all the guts of this little wonder are in the front of the headset, it’s definitely front heavy.  The head strap has been a bone of contention with many of the community though I personally don’t have much issue with it as it fits my head quite nicely and once on, I never really noticed it.  Of course, should you want to pay you can order the Elite strap or any other aftermarket mounting gear to give yourself a little more comfort with some even offering a nice counterbalance to the front end weight.  Still, even at its best that strap is nothing special.  As front heavy as it is, I never experienced much, if any discomfort during my play sessions and even after hours in the headset I wasn’t left with any marks on my face, a problem that plagued the original quest.  Whether you buy the 64Gb or 256 Gb models, each looks identical including the off-white color which will attract scuffs and stains if you aren’t too careful.  You can adjust the IPD (interpupillary distance) from 3 different settings which could and will be an issue for some as, if your vision falls somewhere in the middle of those distances, you might be in for a blurry and uncomfortable experience though for myself, I had no issues with that either.

Resolution has been improved over last tears model to 1832 x 1920 pixels per eye which gives it one the highest resolutions of just about every headset available save for the upcoming HP Reverb 2 and the Pimax XR headsets which I think are still a thing???. The quality in resolution is made apparent with the almost complete lack of a screen door effect whether you are just watching a film or playing a game.  There is an option to toggle between 72Hz and 90Hz though at this time, that higher refresh rate is only active in the home environment and in the Oculus browser.  There are some workarounds to have 90Hz active for games, though this will drain the battery a little faster.  I’ll talk about those workarounds in a bit.  Even at 72Hz, I found just about everything viewed in the headset to look seamless save for any performance issues with a particular app.  Your controllers are tracked via the 5 cameras in the headset and in my experience tracked flawlessly using the Quest 2 games and apps.  Thanks to freedom of being untethered, just about any area you find yourself in can become an active play space with it taking mere seconds to draw the edges of the area you are in to ensure you won’t smack a wall or dresser.  This guardian system will show up as a red lined grid if you get to close its edges and if you want, playing stationary while sitting is a button press away.  A great feature is the Quest 2’s location memory that allows you to set a guardian system up once and returning to the same space will have the headset ready to go with your guardian system already in place. 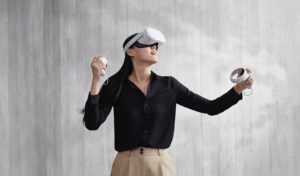 Going untethered is the future of mainstream VR adoption.

As far as the actual gaming and experiences go, I am nothing short of impressed.  You won’t get top of the line PC level games like Half Life Alyx or Asgard’s Wrath but that doesn’t mean there aren’t a host of high quality and fully realized experiences.  VR classics like SUPERHOT,Moss,  Beat Saber and a host more are available as well as newer popular titles like Pistol Whip, Walking Dead: Saints & Sinners & Onward ensuring that those who nab the headset have plenty to play and won’t feel like they bought an inferior product.  While some titles are a near perfect translation of their more powerful PC and counterparts, some do take a visual hit though I need to stress that from what I have seen and compared, it’s only the visuals that are sacrificed with gameplay being entirely intact.  I wouldn’t hold that against the Quest 2 as having some of these titles run, and run well, on a wireless headset is a solid trade as being tethered has always been one of the biggest knocks against VR.  The freedom of utilizing a space of almost any size allows for a use of VR that is next level when it comes to immersion, assuming the game you are playing can also utilize that space.  Additionally, there is hand tracking available on the headset which allows you to use just your hands to navigate menus and play a few select titles.  There aren’t a lot of apps available that support this feature and it feels somewhat limited right now with tracking being lost if your hands leave the camera’s range or being untrackable if you bring them too close together or if lighting is too dark,  but it’s still awesome to see your VR hands mimic your real-world actions, it just feels like it’s geared more toward apps and social experiences .

Viewing experiences like YouTube, Netflix and Amazon Prime are available to watch in VR as well as more social experiences like Big Screen which let’s you watch shows and films with your friends or even with strangers.  The portability of the Quest headsets allow you to watch cinema as if you were in a living room or in a theater and thanks to the resolution of the HMD, the Quest 2 is one of the best personal media devices available.  I wouldn’t bring this on a bus or anything nutty like that, but I’m a little excited to use this on my next trip on a plane or out of town work trip.  The Oculus browser lets you surf the internet meaning if you wanted too, you could stay in the headset and still consume most of what you do out of the headset.  It’s an amazing piece of standalone tech that really checks off all the boxes for what I want out of a portable VR headset and everything I’ve mentioned so far doesn’t factor in the ability to connect this to a PC and unlock even more options.

There are plenty of popular titles available for the Quest headsets!

If you have a VR ready PC, with an Oculus Link cable or capable USB-C cable, you can now play higher end PC titles on your quest.  This would of course make this a tethered experience  but given the specs of the headset, it immediately puts itself ahead of Rift and other brands of wired headsets.  Want to go a step further, you can sideload applications not available in the Oculus store but built for the Quest to expand your gaming experience via an application called Sidequest which takes mere minutes to set up and dramatically increases the amount of available games including unlocking that 90Hz mode.  Heck, with the app Virtual Desktop, a strong 5G connection and a solid gaming rig, you can stream your PC exclusive games to your Quest and play those tethered gems untethered with next to no noticeable latency, which is how I’ve been enjoying those beefier titles.  The Quest 2 is designed to be the 1 headset to rule them all and on paper it should be offering an unparalleled VR experience thanks to its ease of use, HMD specs and options to play tethered, but unfortunately, there is that requirement of a Facebook account to use the headset, which could be a deal breaker to some.  One minor note for those in the know, if you were hoping to play your Oculus Go library on the Quest 2, that is currently not an option and while Facebook has said they might consider adding it down the line, I wouldn’t hold my breath.

I’m not going to go into detail with regards to Facebook’s dubious use of user data and collection and unfortunately, no matter how you feel on the subject you have to use a Facebook account to login, going against Oculus’s original announcement back when the big ‘F; bought the company, that the 2 entities would remain separate.  Even if you have an Oculus account, if you want to play the Quest 2, that’s no longer good enough.  As a VR enthusiast, I’m okay with this but I don’t begrudge anyone for thinking differently.  I’m also careful with my online presence and whenever I use any online service, I expect to have my activities tracked.  We don’t know the extent of that tracking with regards to VR but know that if you are having a gathering with friends in Big Screen or chatting it up in the social app VR Chat, there’s a pretty good chance that Big Brother is watching.  If you are thinking of ditching Facebook or worse, get your account shut down, you’ll lose all your store purchases.   That doesn’t mean FB’s integration is all bad as friends list are easy to manage and should you want, you can easily stream your VR session to Facebook so your FB buds can check out just how awesome VR is.  If you want to stream to other media outlets though, your going to have to do a little behind the scenes work to get that going properly. 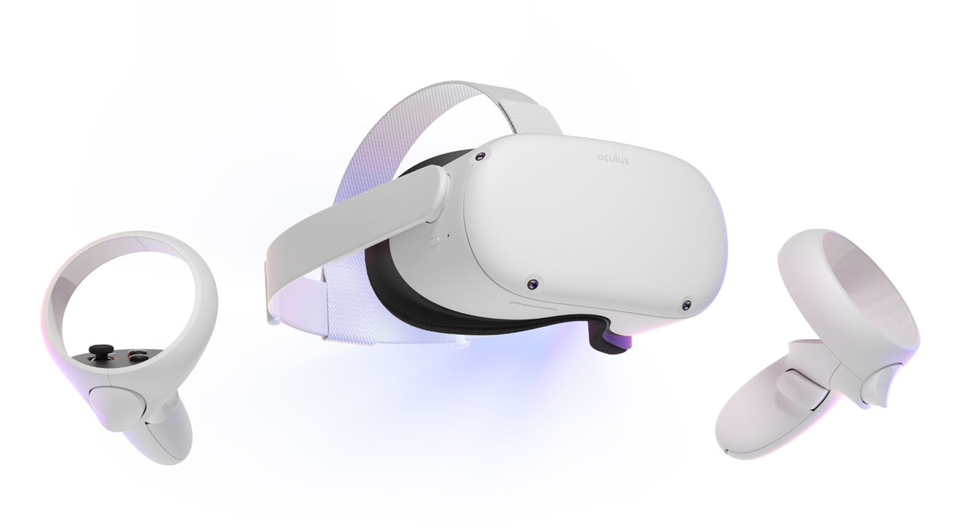 The Oculus Quest 2 has done nothing short but completely blow me away with just how much it can do.  The untethered stand alone Quest 2 experience feels full offering up some of the biggest gaming titles available across any of the big 3 VR stores.  The ease of just placing it on and having games ready to go in seconds has had me up my fitness regime thanks to games like FitXR & Creed: Rise to Glory and just hopping on for a quick round in the Battle Royale Game Population One is as easy not leaving the couch, which is awesome!  If you have a gaming PC then the sky’s the limit with ]what you can do and while you might have to invest a little extra money for a link cable or fancy router, it’s a small price to pay for what is probably the best way to experience VR in 2020.

What would I pay?  The 64Gb and 256Gb models run at $299 and &399 respectively and no matter which way you go, they are easily worth that coin save for if you are leary about Facebook.  One little side note would be that on my 256 Gb model, I’ve already filled up tover 64Gb so if you go the smaller route, expect to be battling with the limited drive size as some games come in at almost 10GB.    If you don’t care about Zuckerbergs ongoing shenanigans then I’m honestly hard pressed to think of any reason why you shouldn’t pick this up if you have the money for it.  It’s amazing.