If you like frustratingly difficult physics based puzzlers than you may have just found a game to fill that void in your life.   It’s up to you to save Dash Johnson, one lone astronaut sucked into a wormhole while on a routine space walk and sent hurling through the cosmos.  The premise works, but is also odd.  Suffice to say it sets up a fun, but difficult puzzle game. 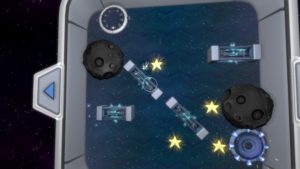 Nebulous was designed for VR and that is especially obvious when you play out of it.  Controls are awkward and limiting without a headset on and the game just plays better in a VR world.  Clicking and dragging are you major control options as you maneuver all the objects around each stage.  The stages are viewed as if you were in a cube, with each side of the cube being a part of the level.  Initial levels only have one side and are easy to solve but level difficulty quickly ramps up as more objects and sides are added to make for some very complex puzzles.

Dash starts each level at a certain point and you must move objects specific to each stage to get him from point A to B.  He effectively free falls and it’ll be up to you to make sure he doesn’t hit any walls until he gets to the next black hole, and one stage closer to home. Objects to get Dash to the end include simple barriers, trampolines, conveyor belts, asteroids and a few more surprises.  The most dramatic change up to levels is the gravity, it can pull Dash in any direction depending on which room he is in.  Connecting each room are wormholes that are color coded to each other so you may have to solve up to 5 rooms in each stage.  Star bonuses are here for completing in as few attempts as possible and in-level stars to collect add to the challenge of getting a perfect score.

Frustration will take hold soon enough for a multitude of reasons.  First off is that, even though progression unlocks new stage variables, the game just starts to wear out its welcome and the stages just kind of blend together after awhile.  I found the best way to play this was in small doses, maybe a few levels during one play.  Secondly, there is no hand holding here and you are left to your own devices to figure what a new variable does which can be confusing at times.  Finally, it’s difficult and with some levels containing 5 rooms it can take a tonne of trial and error to get Dash to the end.

The visuals here aren’t anything to shout out about, but they serve their purpose.  Everything is clean enough and watching Dash bounce around a level is amusing enough on its own.  What adds to the fun is the audio as Dash laments his situation and derides you EVERTIME you mess up.  Dash is one of the cockiest characters you have ever come across and whenever you mess up, he’s right there with a snide comment to hammer in that you need to get better.  These are humorous, though they do repeat quickly enough, but new sayings scattered throughout keep it somewhat fresh.  Any other effects present serve their purpose, but aren’t anything special. 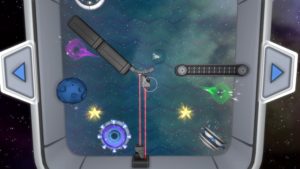 As the game progresses, so to does the difficulty

Despite it’s difficulty and lack of instruction, this is still fun.  Figuring out what new elements do and how Dash interacts with them as well trying to get Dash to the end will consume those that crave challenge.   Frustration will set in though, especially when you have been stuck on the same level for way longer than you’d like.  Thankfully the dev’s put in a fast forward button to help speed along repeated attempts.  Also, due the nature of the game, each level doesn’t have 1 set solution so while there maybe a “perfect” way to organize a stage, sometimes you will just get accidently lucky and find an unexpected way to get Dash where he needs to be.

With 36 levels to conquer combined with the length of each stage and increasing difficulty there is  a fair bit on content here.  The challenge may at times feel unfair, but is matched by the satisfaction of completing a difficult stage.  If you like exercising your brain than this is definitely for you, plus Dash is pretty funny at times and adds some levity to ease frustrations.

What would I pay?   $14.99 is probably the perfect price for what you get.  It’s a budget title that delivers on fun and challenge.  That said, if you dislike brain teasers, it’s probably best you steer clear lest you get extremely frustrated.