This review includes the Quest release and has been updated to reflect the additional content that comes with the games launch on that headset.

VR Games that involve a swinging mechanic are becoming their own sub-genre as, in the last year, we seem to be getting many titles utilizing this style of gameplay.  Due to this fact, it’s becoming a little crowded in the Spiderman sim world and when this happens, it’s up to games to come up with their own creative style and flare to stand out amongst the masses and Yupitergrad definitely has both in spades.  You play as a kosmonaut sent to a science facility on a distant moon to help restore it so it can begin the production of PEKOL, the greatest source of energy EVER! 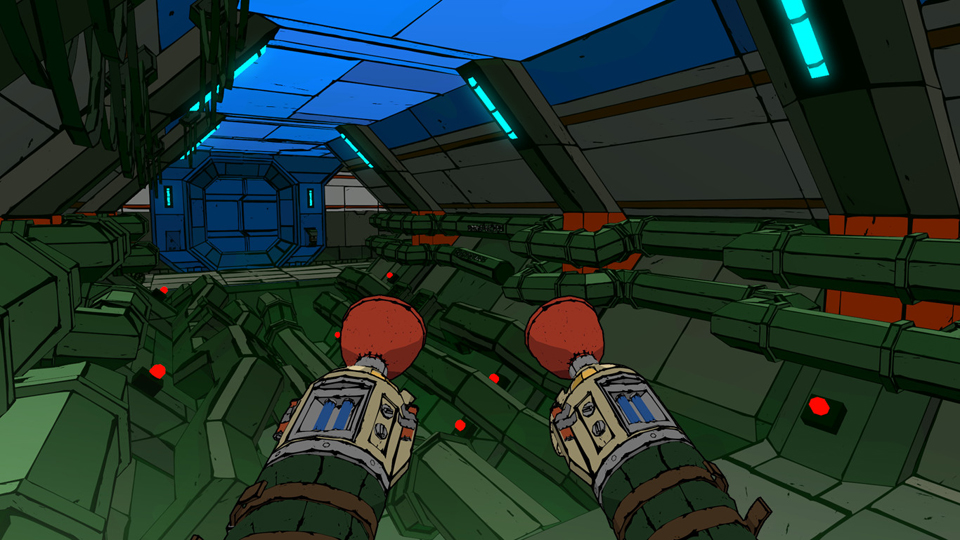 Armed with your trusy kosmosticks, it’s on you to serve your country!

For those familiar with these swing type games, to move around just about anywhere, you need to launch your grappling hooks or in Yupitergrad’s case, plungers onto sticky surfaces which will be indicated with the color blue.  If it’s not blue, your suction cups won’t stick unless they are green, in which case you can pull those objects toward you, but not swing off them.   A second form of locomotion in here are a couple of arm jets which can be used briefly to slide you along though are pretty much useless above water save for making small adjustments to your position.  In water however, those jets can be used indefinitely, and you’ll be switching from swing to swim mode as you navigate this crazy facility.   Standard comfort options are available including blinders and click or smooth turning along with a few more calibrations that further tailor the experience to your liking.  It should be noted that the controls are stunted on the PSVR version of the game and might take a little time to feel comfortable, but they work just fine.  You’ll visit a few different areas throughout the complex with each offering a variety of obstacles to avoid like rotating spikes, poisonous gas, moving platforms and a host more.  Your suction cups have unlimited range so if you can see a blue surface you can latch onto it.  Things get a bit trickier as you can just swing and use your momentum, reel your self in slowly, or pull your arms back for some massive speed boosts.   Each puzzle is divided by large doors or barriers so when you pass through them you know you’re on the next one.  Time Attack mode has also been added to coincide with the release on the Quest and offers 20 new and old stages that challenge you to get through them as fast as possible.  Of course, there are online leaderboards to see just how well you are doing and this mode is a fantastic addition for those craving a little more fast-paced action.

Yupitergrad looks really good in the headset thanks not only to the cell-shaded look but the high amount of detail in just about everything around you, no matter which headset you play this on.  Textures are flat, as is typical when it comes to this art style, but many of the set pieces are massive with tons of moving parts making the entirety of this game just pop.  The facility you are in is barren and sterile and you’ll often see the same architecture over and over but that just makes sense given the context of the game and even with that in mind, I still enjoyed the visual aesthetic all the way to the game’s nutty conclusion.   New elements are introduced the further you get in the campaign and each new addition to the station typically adds another obstacle to get around.  There really isn’t too much more to say in this department except that it works, and I really have almost no issues when it comes to the visuals. 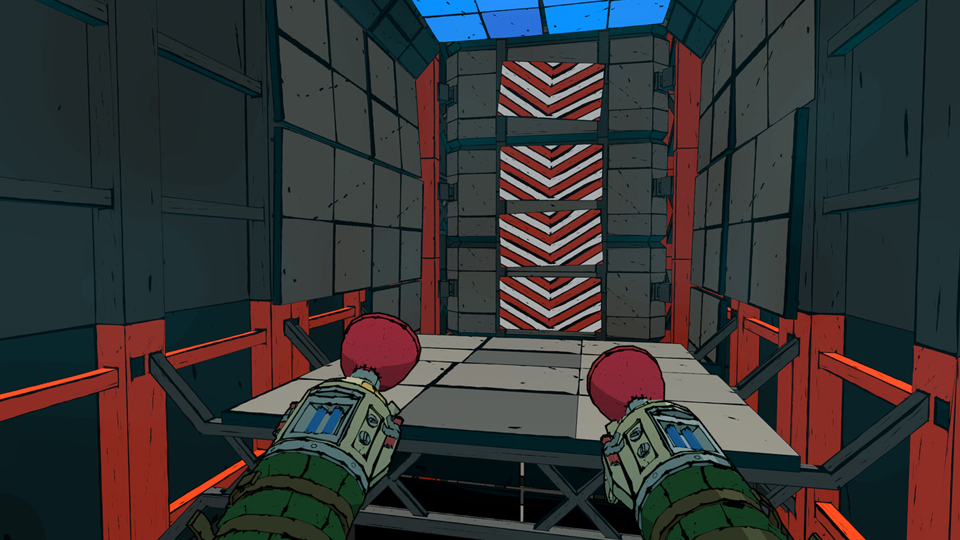 I have no idea how many songs are in here, it might even just be 2, but whenever they kicked in, I couldn’t help but notice how well it fit with the overall themes in the game thanks to their overly patriotic and chanty nature.  You’ll receive orders from your Kommander to do whatever it takes to help your homeland and even the AI “assisting” you on your journey, aptly named AIsha, has an emotionless Slavik accent.  The overtones here are light and sarcastic with the kind of cartoonish patriotism seen in movies from a few decades ago.  That AI constantly makes awful, pun-soaked dad jokes that I really enjoyed and provides a little back story as well as telling you about PEKOL and the histories of the futuristic universe this takes place in.  Once again, as far as the audio presentation goes, I really didn’t have any issues worth mentioning.

I really enjoyed my time in Yupitergrad but it’s not without issue.  My only significant complaint being how you interact with the geometry.  It was 50/50 whether colliding with the environment would help or hinder me.  Bumping into the slightest outcropping on a wall would cause me to lose all momentum and depending on the situation, fall to my doom unless I could quickly save myself.  On the flip side, on more then a few occasions I would be falling to my death only to be stopped by the smallest edge jutting out from a wall, giving me all the time I needed to find my way out of my situation.  That unpredictability had me doing my best to avoid touching the environment but given the erratic nature of the movement system, that’s a near impossible task at times.  While I did benefit from the hypersensitivity of the collision detection, I would much rather be able to predict where I’m going without having to worry about the slightest change in the geometry around me.  I got through the game, but every time I died because I just came to close to what may as well be an invisible wall, I couldn’t help but be frustrated.  My second, minor issue is the checkpoint system which for the most part is great but it’s not perfect and, on a few occasions, I started back at the beginning of the stage which seemed a little unfair as I had bypassed some fairly difficult areas.   Beyond those issues, the game plays relatively smoothly as I cruised through the campaign in just over 2-hours. 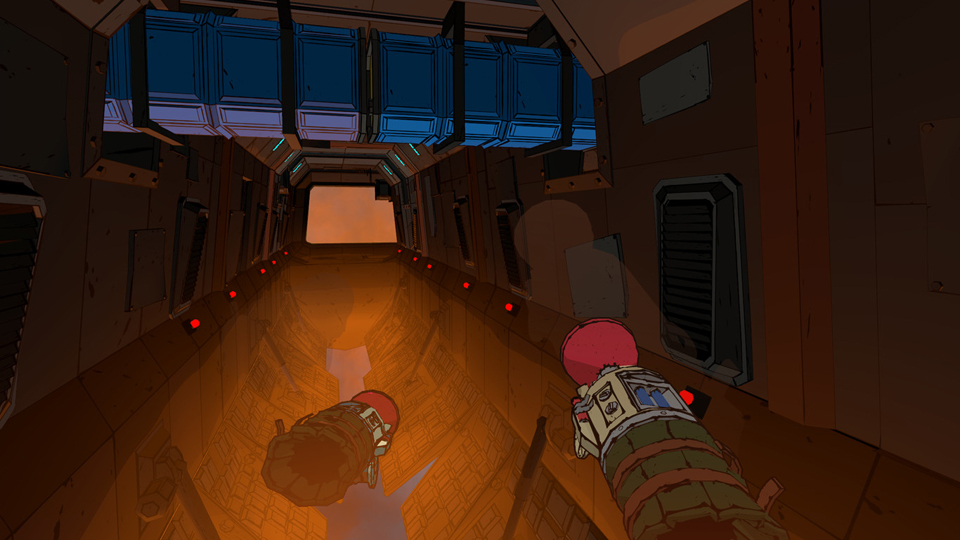 Don’t fall….whatever you do, don’t fall!

Yupitergrad is some good clean VR fun and fans of games like Windlands or the Spiderman Home Coming game will find a lot to like here.  The shorter campaign ensures this game does not overstay its welcome and the story may be brief, but it’s entertaining and comedic.  Should you crave a bit more, the Time Trial missions add great fun as some of the times on the leaderboard seem near impossible to achieve.   If you enjoy challenging your reflexes and can handle cruising through the air at high speeds…and push through a little frustration as you’ll more then likely die a bunch of times, then I bet you’ll dig this!

What would I pay? This is $15 US and worth it.  It’s fun from beginning to end, light-hearted, challenging and the swinging mechanics combined with the environmental puzzles are a treat.

Gamedust provided The VR Grid with press codes for this title and, regardless of this review, we thank them for that!