Up until now I’ve always lauded those developers who have VR patched their non-VR content, regardless of how I thought of the actual content and I’ll do the same here.  More VR is almost always better, right?  With that out of the way, the VR patch offered up for Moto Racer 4 leaves a lot to be desired. Even if they pay up on their promise of patching the whole game for VR given adequate sales, the VR mode is sub par compared to similar games. 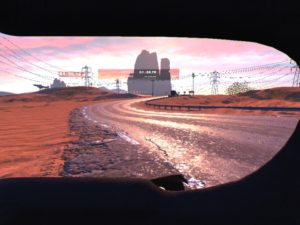 These screenshot look way better than what is actually displayed in the VR headset. This is the VR view with the helmet on.

Moto Racer plays exactly as you would expect it to with accelerate, brake and the standard tropes of the racing genre all present.  The addition of tricks is here as well and if you are looking to boost your points  Performing these aerial button combos’ will give you that extra flare, provided the courses have significant sized jump as not all do.  This plays well enough, but just never felt “real” as bikes seemed to behave more like hover bikes.  What I mean by that is I never felt like the road was a factor in my race as I was floating just above it.  Roads are typically flat no matter what sections you are on and offer zero feedback when it comes to road surface and your bike.  It’s not awful, it just plays more like an arcade racer than a sim.

There are 4 main modes to choose from; Career, Quick Game, Split Screen and Online however only 1 of these modes is VR compatible and that’s Quick Game and of the 4 modes offered in there, only 2 support VR; Time Attack and Hot Lap.  With the full game featuring 15 different modes in total this feels more rushed than anything else, especially considering the downgrade the gameplay and visuals take in VR.

What looks average by todays gaming standards takes a huge hit in VR.  Aliasing becomes a giant issue as everything now carries with the squared, pixelated edges from a bygone area.  It’s not pretty.  Add to that the pop in of foliage that appears right before you pass it and lighting effects that take a hit in VR as well and you are left with an unappealing jaunt in this virtual world.  With that said, getting up to top speeds in VR is still undeniably exhilarating.  The audio is fine with everything sounding like it belongs, although you are basically relegated to 2 sounds, your engine and the generic music track accompanying your race.

The few other annoyances I have are as follows.  The levels seem kind of lifeless, even when racing against other AI racers or in traffic.  The traffic is so bare I’m not quite sure why the devs even put it at all.  The biggest annoyance for VR fans is that to unlock all the games VR levels, you need to play through the non-VR campaign first.  It’s not the greatest driving game to begin with and being forced to play more than I’d like in a mode I don’t care for hurt the VR experience.  Also, the loading screen offers up arrogant quotes and info from what I assume are made up racers.  They very rarely helped and came off as unappealing very fast.   Lastly, your head is always vertical so taking sharp turns ruins that feeling of riding a bike, unless you are willing to tilt your whole body to make up for this. 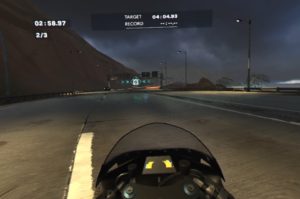 The levels offer a fair bit of variety, but the visual hit in VR makes none of a them a joy to experience

Obviously, there is still value in the non-VR content, but that’s not what my site and reviews are about, so I’m not really going to touch on it.   You get a bunch of courses, modes and multiplayer and if you’re into that, great!  The VR portion feels so tacked on that for the 1st time since I started reviewing I feel like it should have been left out, and not just for the gamers sake.  This game suffers as well and VR makes the overall product worse.  This needs a VR visual tune up first and foremost and HMD detection so we don’t have to play the game in non-vr mode to unlock all the VR content.  Unfortunately, this is a pass.

What would I pay? $10, and that’s only for the VR portion of the game.  Like I said, there is much more value in the non-VR content, but for those interested in just VR, you should probably pick any other racer available on the platform, at least until the devs polish this up a bit.