For those who might remember, Mortal Blitz is a decent first-person shooter released on PSVR and other headsets all the way back in 2017 and features a dystopian future where you played as a member of an elite task force out to stop all manner of baddies and was met with relatively positive response thanks to its nostalgic cover shooter gameplay.  Combat Arena is the next iteration in this series and while the standard & deluxe editions contain a single player campaign, for the most part this is a multiplayer experience pitting you against up to 3 other foes.  Also available is a free version of the game which caps your experience level and restricts access to most options excluding the multiplayer action. 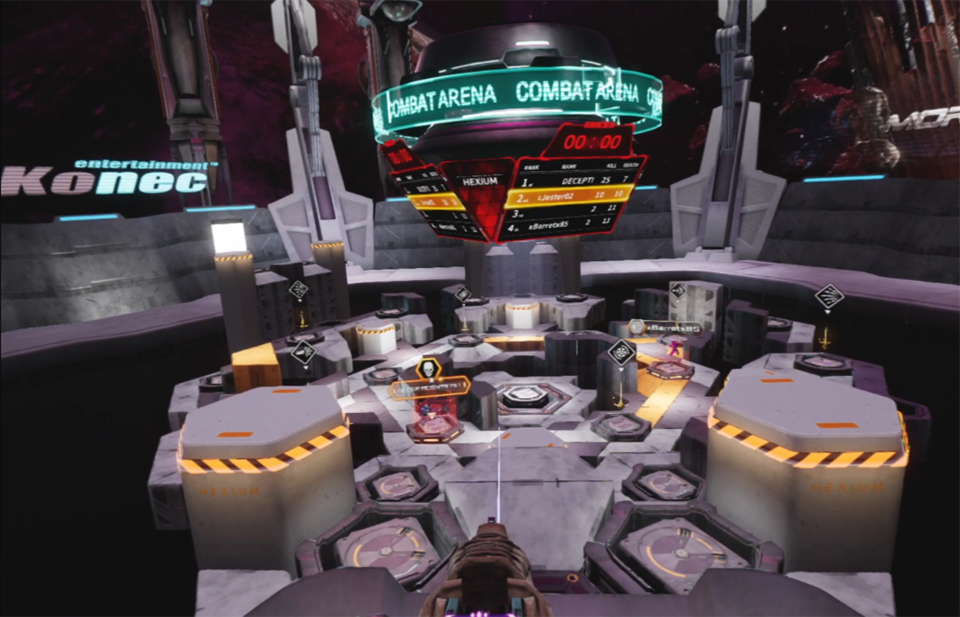 You always start high with a good look at the arena

There are 2 methods of control here with the DS4 being supported as well as the Aim and as always, if you have the choice, go with the Aim option as the DS4’s limited tracking could be an issue.  Regardless, either method controls identically, and you’ll be armed with a variety of stock weapons typical of the FPS genre.  The core of the game is the multiplayer option which pits you against up to 3 other players in small arenas littered with weapons.  What separates this from others is that the arenas are actually broken up into hexagonal grids and in order to move around the map, you need to teleport to each hex by looking at it and holding a thumb stick forward where a brief timer pops up, counting down to your teleport.  Each hexagon is more than a place marker as they also have a series of shield walls that surround you at differing heights that allow you to shoot through them, while blocking incoming damage, though these walls can be destroyed leaving you exposed.  There is an in-game duck button or if you want, you can play standing and physically duck and I recommend the latter as I found the duck button never lowered me enough, often leaving my head exposed for an easy kill.  To pick up the weapons on any hex, you simply need to be looking at them and shoot, once you have landed on that hex.  In the center of each arena is a super weapon called Rampage, which fires a powerful orb that instantly kills anyone in it’s path, regardless of cover, though this weapon only spawns after a few minutes of play and is limited to 3-shots.  The single player campaign is only available in the paid versions of the game and contains a very wordy story that becomes irrelevant quite quickly as you’ll still be fighting in the exact same arenas as the multiplayer, but against AI opponents that offer minimal challenge.  Experience is accrued in on or offline battles and also available are season passes which are only available in the paid versions of the game and offer up daily and seasonal objectives that give you points to unlock those arena packs to get new skins for your avatar and new weapons with varying stats.  Those challenges can be comically easy like ‘pick up a shot gun 10 times’ or ‘move to a hex’, but because of that ease, it seemed like I was consistently completing these tasks. 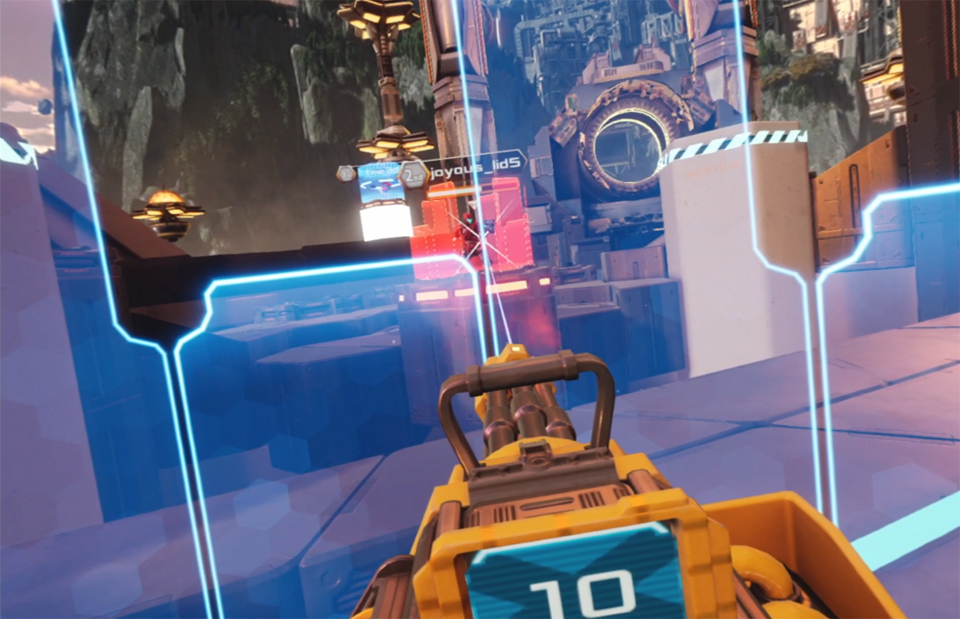 Combat Arena is a fine enough looking game with each of the 5 arenas available having very different backgrounds and color schemes thanks to the various planets where each stage is located.  Many of the weapons you carry are cartoonishly massive but fit with the future soldier look of the combatants.  Many of the base models look similar to Master Chief and other cyber soldiers though should you purchase the game the avatar options become much larger allowing you to customize your armor from select pre-made models with a lot more flare.  Each stage is fairly small with some being relatively flat while others have some verticality making the high ground the place to be as the shield walls that surround a hex are less effective at blocking attacks from up on high.  Loading screens have comically hilarious tips that break down what double kills are and other painfully obvious facts, though I still prefer those to watching a reticle spin or a blank screen.  The avatars all animate well enough though can look stiff at times but overall, on the visual side of things, this does the job.

Sound design is a little hit or miss with weapons often sounding a little flat and not that powerful. A pretty stock techno rock track plays in the background of each map and doesn’t overtake the action.  There is no in-game voice chat, which is disappointing as it’s nice to meet new folks and maybe dish out a little smack talk and with no private matches or lobbies, there really isn’t any way to play with friends short of lucking out in matchmaking.  There is a commentator type voice that will announce when you get a double kill, revenge kill or a few other kill types as well as stating which gun you just picked up. The campaign does have some additional voicework attached to the story though it’s mostly just to setup what ends up being a matchup against other AI combatants. 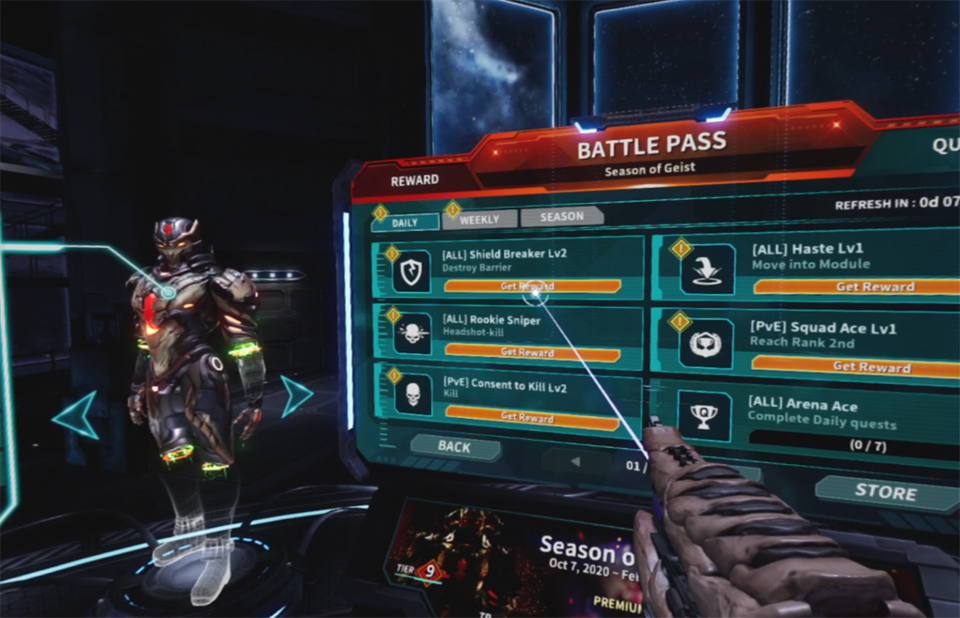 There are plenty of challenges and rewards should you choose to pay for the game.

I definitely recommend trying out the free version to see if this is for you as it does allow for endless play and you get to enjoy the multiplayer side of things, which is the star of the show anyways.  Unfortunately, there is a definite ‘pay to win’ element to the game in regard to whether you buy the standard or deluxe editions or just stick to purchasing loot crates.  A bulk of what you’ll get will be skins for your weapons and avatars, but you can also find more powerful weapons meaning those who pay, will have an advantage.  From what I’ve seen, those individual perks start off small with minor increases in damage or fire rate but when compared to the stock weapons, they do still provide an edge along with a few other perks that increase your overall damage with a specific weapon types or extra experience.  The campaign is nothing more than playing through the games stages with differing enemy types but the AI just isn’t up to competition levels and I breezed through the stages dying only once or twice versus my 10+ kills with the major bonus from the story mode being that you can accomplish seasonal achievements and objectives and level up a little easier.  I did encounter frame rate issues on or offline which isn’t to big of an issue in the campaign, but is excusable during the online portion.  More than a few matches I played had server or host issues, including 1 campaign level,  which caused matches to end abruptly without a winner or accrued experience.  There’s also the very huge issue of the teleport movement not working if you start a teleport, then kill it before the timer fills up.  If that happens then you can’t teleport to that spot until you look away and then back as the timer will start to fill, then cut out again and again until you glance away.  Once I realized what was happening, it was easy to get around, but it’s a glaring issue that needs to be fixed as soon as possible. 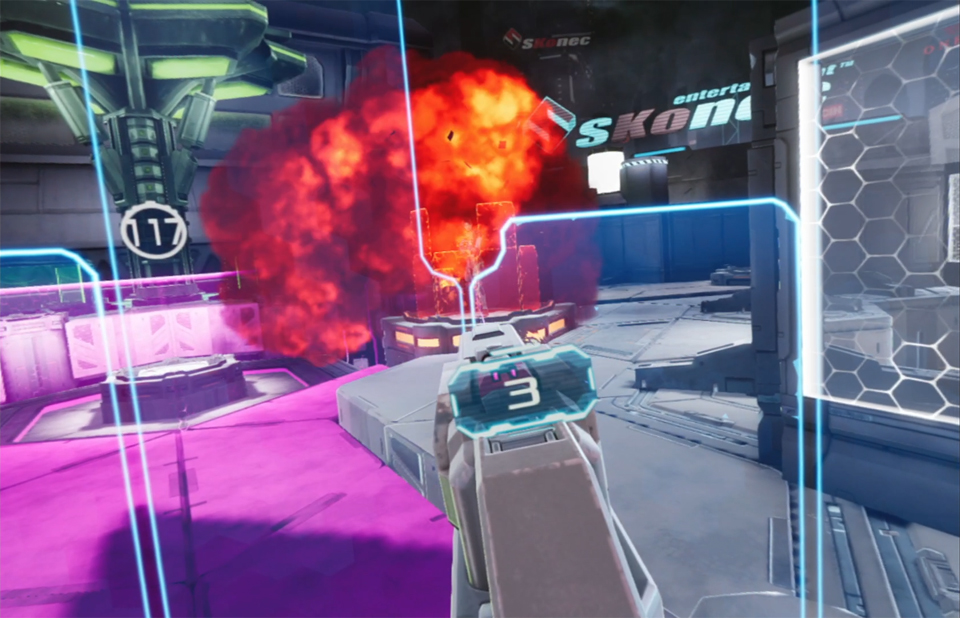 When it works, it’s fun but there are a lot of issues to be ironed out which is unfortunate as this did have a beta release a few weeks ago which should have remedied some of the problems I’ve mentioned.  The fact there is a free version is great but if you plan on playing beyond the level 10 level cap in that version, then to stay competitive, you’ll have to pick one of the paid versions.  The single player campaign feels completely tacked on and even though their is a story their, it makes no sense when combined with the gameplay and shouldn’t be a consideration if you decide to pay for this as it’s boring and repetitive.  I enjoyed my time with the game regardless of the issues I mentioned and the free base version had me consistently playing online with minimal wait times which is a rarity in VR shooters, but the gameplay and movement style has this feeling like a very dated, budget VR multiplayer shooter.

What would I pay?  This is one tricky as I strongly recommend you play the free version before even considering dropping money on this.  If you hit that level 10 cap and plan to keep playing, the standard edition will run you $25 US which still seems to high for what is currently available. Even if they address my issues, unless you just can’t get enough of this, I’d be hard pressed to recommend paying anymore than $15 and personally would not consider investing any more money after that.  It’s fun for what it is, but what it is isn’t anything special.

SKONEC Entertainment provided The VR GRid with a press code for the deluxe version of this title and, regardless of this review, we thank them for that!