Would you like to rampage through city after city destroying everything in your path? Does climbing skyscrapers, eating pedestrians, or tossing cars around like toys appeal to your inner Kaiju?  If you answered yes, the team over at Rank17 have got you covered. So, start practicing your epic monster roars as we take a look at Mighty Monster Mayhem for the HTC Vive! 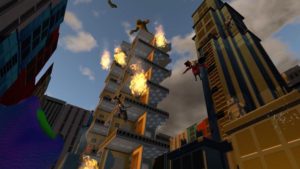 The multiplayer mayhem is all about being the most destructive before time runs out.

Shunned by the scientific community, you will take on the role of a scientist who has mutated himself into a giant monster in order to exact his revenge and validate his research once and for all.  Your primary goal is to rack up points by taking out listed objectives and destroying everything you can get your mutated mitts on in one of two play modes; story mode or multiplayer mayhem.

In story mode, you will need to take out specific objectives, conveniently listed on your wrist display, in order to unlock new levels and monsters to play as.  Each level consists of a different city populated with various building, people, vehicles, and a wide assortment of other goodies you can use to cause destruction along your way.  In the multiplayer, you will go head to head against your friends as you try to rack up the highest score by destroying everything you possibly can. Both the multiplayer and story mode are timed levels and have leaderboards that will record your epic score for all the Steam community to see.

Your primary weapons are your two gigantic claws. You can use these to climb, grip or throw, rip out chunks of buildings, and eat pedestrians. The controls for these beasts are straightforward using the trigger button to grip or make a fist and releasing to let go or throw. The only hang-up I found with these two actions sharing a key is that if you find yourself in range of anything that can be picked up, you will do so instead of making a fist. This can be more than a little infuriating as the timer gets close to counting down to zero and the majority of the map is throwable rubble. Movement is achieved through holding down the buttons on the sides of your controllers and swinging your arms in the direction you wish to travel. Once you get the hang of this, it proves to be a pretty ingenious method of movement and fits in perfectly with the whole monstrous creature vibe.

To aid you in your quest you will find various power ups scattered throughout the city. These do a great job of being extremely useful while remaining balanced as you learn how to best utilize each one in the small amount of time they will remain active. Health is also a concern in Mighty Monster Mayhem so various health power ups can also be found and health can also be replenished by eating the fleeing tiny humans. This becomes important when you progress through the higher levels. As you destroy larger structures, your threat rating will increase and you will be attacked by everything from ground troops, helicopters, armored cars and tanks.  Luckily you’re a giant freaking monster so swatting these pests away with a firetruck is completely reasonable.

The cartoonish graphics are not horribly demanding and allow for a fairly high amount of destructible objects to be on the screen at any given moment while still looking good enough to be enjoyed. I would have liked to see a bit more variation in the assets however, as most levels seemed to have the same look and feel and are populated with the same items and surrounding buildings that serve as walls. There is some variation, just not enough to give each level its own distinct look.  Changing the sky from one level to the next would also go a long way in providing the feel of variety but this did not occur in the three levels I played.

The sound fits the aesthetic of the game nicely. The explosions and building collapses have a gratifying noise and even the people screaming as they flee in absolute terror is enjoyable, really enjoyable. The voice tracks in Mighty Monster Mayhem are very entertaining. The guards will give orders and provide a bit of humor and the game’s narrator, another scientist that helps you along the way, is an absolute riot. 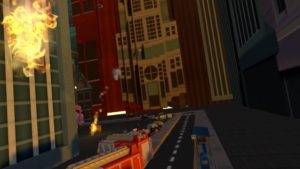 Mighty Monster Mayhem is a straightforward game that manages to still be challenging and, as with any arcade game, being able to fight for a top spot on the leaderboards is addictive and fun. The tutorial mode at the start of the game should also be mentioned as it is both helpful as well as funny, so check that out. This game has several levels in the story mode and can be enjoyed in multiplayer as well making it a pretty solid all around experience. Ultimately it comes down to climbing around and destroying everything in sight for me and this game delivers.

What would I pay?   I would gladly drop $14.99 for a chance to face off against my friends in some good old fashioned monster mayhem.

Rank17 provided theVRgrid with a review copy of this game and, regardless of our score, we thank them for that!