It’s time to sail the 7 seas (not quite) in this sailing simulator that looks to not only teach you how to sail but compete in single player challenges and multiplayer races designed to test your sea fairing skills.  This is actually the 5th iteration of the Marineverse series which has its roots on the gear VR platform but has since expanded to the PC headsets and now supports both models of Quest headset. 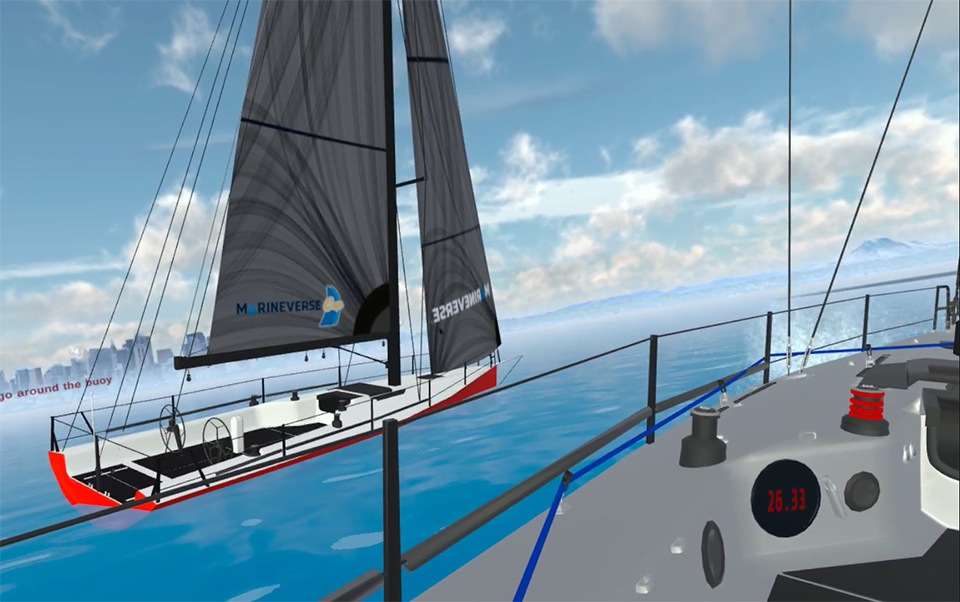 Get ready to face off against the competetion!

A quick introduction teaches you the basics of movement, limited to node-based teleportation which, when on a boat, lets you easily move to specific spot where you can reach whatever you need nearby so you can sail properly.  Click-turning is on by default and while there is a smooth turn option, it’s incredibly slow with no way to adjust its pace meaning you are better off with the click option or just turning in real life.  Once you “walk” to the dinghy at the end of the pier, you are ready for your 1st lesson and now find yourself on the ocean ready for training.  Text bubbles pop up around you as well as some light voice over work should you mess up, detailing what you need to do next and include simple tasks like monitoring wind direction, adjusting the boom, expanding or bringing in the sails and of course, steering.  There are 2 vessels to choose from in the base version of the game with a 3rd being available should you get a “sailing pass’ which unlocks the WAZSP ship as well as additional customization options and access to advanced race types.  The base version includes the training missions as well as mini games which are mostly just tasks to help get the player more comfortable operating the boat.  You can race alone or online against bots, ghosts or other players assuming you can find a match though thankfully the developers organize daily races, which you can attempt 3 times,  and you can view the full leaderboard results on a browser, which is a bit clunky but with the Oculus browser readily available, it’s easy to jump out and back into the game without too much issue. 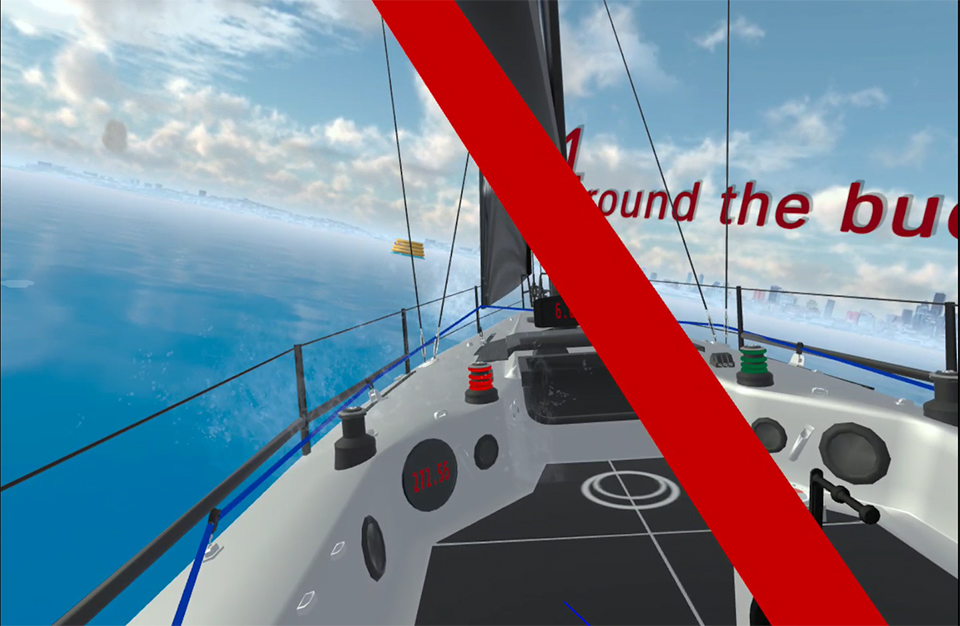 Navigating the buoy’s during a race can be tricky when the wind is working against you.

Marineverse Cup isn’t the prettiest game you’ll ever see as it’s quite clear that making the gameplay feel authentic was the #1 priority.  It’s doesn’t look awful, but as you are sailing on the open seas, the game can just look barren at times.  Water is flat carrying some light wave like details and maybe the occasional whale tail receding into the water, but there is minimal interaction between the boats and the seas which is apparent when you play against others as their vessels seem to hover on the ocean without a splash of water or bobbing up and down with any sort of authenticity, save for the front of your own ship which has some light splashing.  As I said though, the simulation gameplay is intact with each boat having a nice little bit of detail though once again, those details aren’t mind blowing.  Each boat has nodes you can teleport to, and you can physically grab the wheel and other levers, moving them manually or with a press of a button or thumbstick letting the user interact with the boat with as much or as little simulation as they like.  There are a few locations to play in like New York or Sydney Australia though these do little more than swap the low-resolution JPEG city in the background and while it’s nice to see some familiar landmarks, the quality of that image is low enough to make me cringe though I did appreciate that if you drive toward it, it did get larger (to a point) giving that feeling I was approaching the mainland.  What is cool is that you can customize your avatar with some decent detail using the Ready Player Me website which will than be on display when playing in the online matches. What’s here gets the job done, but don’t expect anything too exceptional from the presentation side of things.

Falling in line with the visuals is rather stark soundtrack that works surprisingly well with the gameplay.  While in the menu/dock area you are treated to some forgettable elevator music but once on the open seas, the only sounds you’ll hear will be that of the ocean and your boat as it (hopefully) cruises across the water.  The sounds of the sails catching wind, ropes loosening or tightening and the gulls above you does a great job at immersing the player in the experience and I appreciated that it sounded like I was on a boat on the ocean. 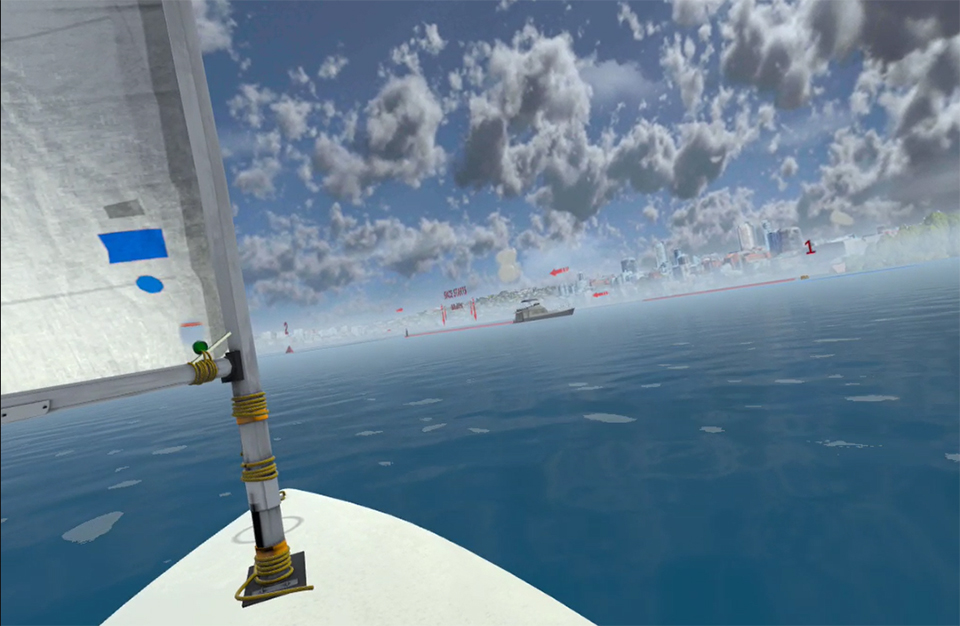 I enjoy the city backgrounds, I just wish they looked better.

So, this is a tough one to break down as it’s not quite a game and leans much more on the simulation side of things meaning that in order to really enjoy this, you need to be good, and I am admittedly not good at all.  I’ve got the fundamentals down but putting it all together has me struggling in every race I attempt which just makes for a very frustrating experience, but I think that’s on me more than the game.  This is very much geared toward sailing enthusiasts or those looking to learn about the sport, and I think if you have that experience or drive, you’ll have a lot of fun here, but for more casual players, I don’t know if it will be worth the effort to get good.  Managing wind direction while adjusting your sails, steering away from the dead zone by zig zagging across the water just got old to me and my frustrations with the game soon turned into apathy and boredom as I just sort of gave up which, once again,  I don’t think is the games’ fault, I just don’t think it’s for me.  Counter to those feelings is when I just chose to free roam and sail the ocean without any sort of goal which I thoroughly enjoyed, especially when I was feeling a little dangerous and removed the guardian system, forcing me to walk around my boat to manage my sails and stuff, though once again, after a little time just cruising around, boredom once again set in, giving me little drive to return. That in combination with the presentation just had me losing interest in hopping back into the game as it felt like the same experience again and again and it just isn’t for me. 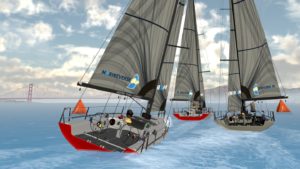 When you find a full race, the game gets much more exciting.

Marinverse Cup does what it sets out to do by giving users a nice little sailing game with an emphasis on simulation and if it sounds like something you are interested in, then you’ll probably pull more this than I did. That being said, the tutorials and overall sailing education factor had me appreciating the sport more than when I 1st started playing and while it may not have hooked me, I can appreciate what the developers are going for and, in that regard, I think they succeeded in their efforts…it just won’t be for everyone.

What would I pay? The cost of the base game is $20 which I think is fine for what’s here provided you have a vested interest in learning the true mechanics of sailing.  The “Sailing Pass” is $13 a month or $99 a year which I think is only for the hardcores as it doesn’t seem to add too much to the game outside of the new boat and races associated with it, though I didn’t mess with the pass so that’s just conjecture on my part and the developers are promising more to come so who knows where this could be down the road.

Marineverse provided The VR Grid with a press code for this title and, regardless of this review, we thank them for that!