Into The Radius has been around for over 2 years on the PC side of things and while I did dabble with that version upon release, the game never really grabbed me thanks to, what I took to be, convoluted and slower paced gameplay.  Since its original launch, I’ve heard numerous accounts of the game getting fixes, patches & add-ons that have made it one of the go-to VR survival games so, when I heard the full game was coming to the Quest 2, I couldn’t help but get a little excited at what I hoped was now realized potential in this post apocalyptic survival game. 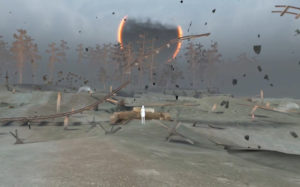 The Radius is a bizarre place.

There is an optional tutorial that opens the game up and, unless you have played this before, I highly recommend it as some of the mechanics may be a little confusing though the 1st mission does hold your hand a little in regard to some prompts but as the tutorial isn’t overly long (and even introduces a little bit of the story) I say just do it.  You can choose to play on 3 set difficulties or adjust each option for your own, unique campaign and can tweak a host of comfort options, including arm length which was something I haven’t seen before in a VR title, with the one notable absence being teleportation movement so, if you do get a little queasy walking in VR, be aware.  I will note that I found the tutorial to be slightly obtuse in how the game directs you and while that does kind of play into how the actual game plays, I was a little annoyed by the confusing directions.  Once you have learned the basics, it’s off to your base which has a few errant items waiting for you, like food and ammo, along with a computer which dispatches missions, sending you back into the Radius where you’ll more often than not being hunting down a specific item though there is a little variety outside of those fetch quests.  Pseudo realism is the name of the game here with you having to manage hunger, health & inventory with the gun play being much more on the sim side of things with each weapon behaving as they would in the real world, requiring manual reloads, turning safeties on or off and reloading clips 1 bullet at a time ensuring your ammo is always ready for your next encounter. The radius is full of deadly anomalies, some that can be seen by the naked eye, while others need to be revealed by tossing a probe near them or by walking into them so it’s best to always be on your toes as some can kill you quickly if you stumble into one.  Also roaming the blighted land are “shadow” people & creatures that don’t appreciate your presence and if they detect you, will do their best to kill you, coming in a variety of forms with different strengths, weaknesses & abilities.  You’ll have to contend with other mechanics as well such as weapon and clip maintenance, a store where you can buy & sell items, weapons & armour, a backpack that lets you pack just about anything into it but can get quite messy and a host more smaller elements that do make this feel very in-depth. 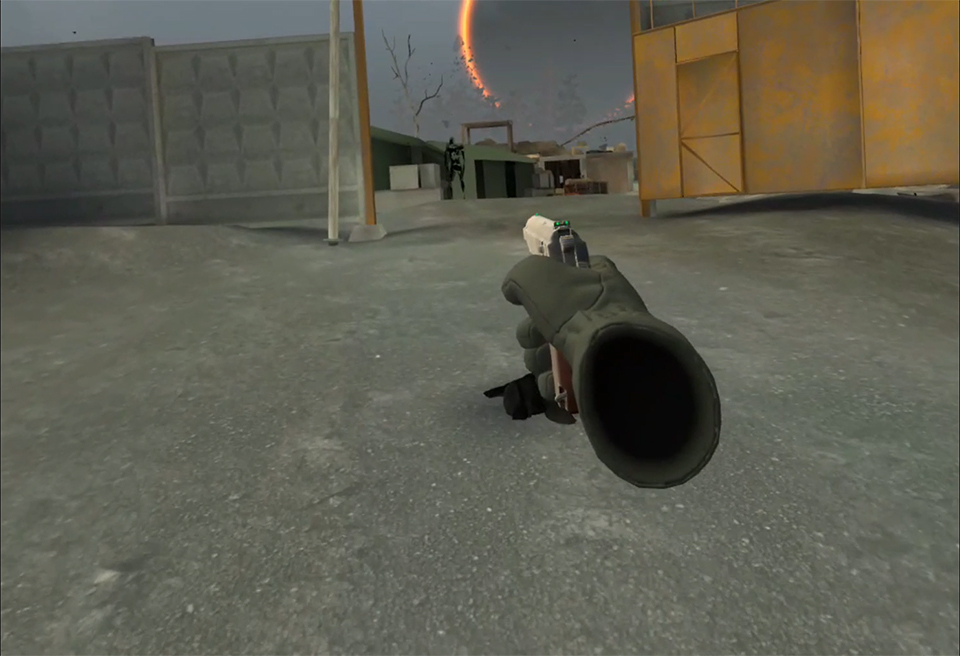 Fragments (and much worse) don’t take kindly to your presence.

When it comes to best the looking Quest 2 games, I don’t think Into the Radius will be anywhere near the top of that list offering up what looks to be a very scaled back experience from the PC version, which also didn’t look fantastic on that platform either.  In truth, environments & objects can look incredibly generic at times, lacking much in the way of finer details & using reduced textures that make much of this game look flat and extremely dated. Now, while the game could look significantly better, what is here still manages to capture that feeling of isolation & unease as The Radius can be absolutely disturbing at times thanks to those anomalies and other unsettling locations.  It’s a place that feels entirely unnatural, like chunks of Russia frozen in time with apparitions of the past littering the map, lamenting seemingly random moments from a previous existence.  Entire sections of the world have been altered in bizarre ways from train tracks that curl into the sky or collapsing bridges that float in the air stuck in place, all with a looming sphere in the distance.  As you traverse each area, the game only gets more bizarre and more deadly so while I was initially unimpressed with the presentation, the gameplay and atmosphere had me pushing past all the ugly in favour of my success & survival.  Enemies are typically black and can be seen traversing the landscaping or guarding specific locations with zombie type foes called fragments being relatively easy to dispatch while quicker and deadlier foes like spawns (aka head crab) and mimics (armed entities) offer various levels of challenge along with a few more, much deadlier forms that show up later in the game.  Visuals aren’t the most important aspect to a game, though I’d argue they are more important in VR, though thankfully, the game loop here is engrossing enough that I ended up forgiving weak presentation.

There’s not a lot to talk about when it comes to audio design as everything sounds as it should as I explored the Radius in relative silence.  An audio queue may be the only sign your in imminent danger so it’s best to pay attention to every scratch, squish and any other noise indicating an anomoly or foe nearby.  Audio logs can be found that flesh out this world as well as an apparition you meet in the tutorial that you’ll find throughout your journey. The voice acting isn’t the greatest and some of the subtitles have spelling errors, but really, I found it all to be serviceable at worst and appreciated just how uneasy almost every moment in The Radius was. 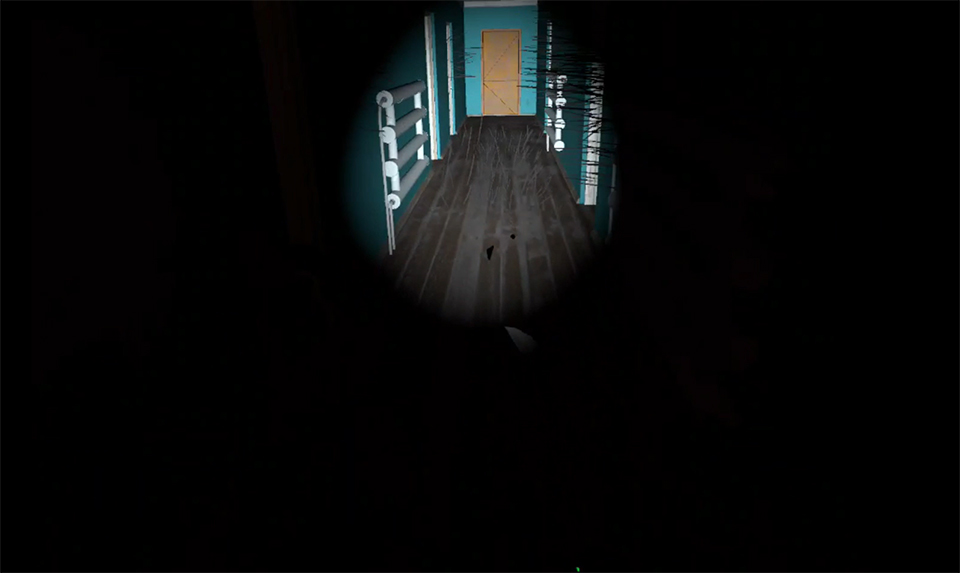 Never leave home without a flashlight.

This is the part of my review where I break down my dislikes and while there are a few, none of them wreck the game and I think you’ll know right away if this game is for you or not.  There are a lot of aspects to your survival that you’ll have to contend with, and I think it’s those moments that will make or break the experience for most as it can be maddening to have a gun jam because you forgot to clean your weapons or start to suffer the effects of hunger because you forgot to eat or bring food with you.  Managing your backpack initially seems under cooked as you can really throw anything in it without issue, items just overlap each other, and it looks like a mess but turn that into a sort of game (not unlike managing inventory in Diablo or RE4) and it became a mechanic I found fun.  I did run into a few glitches that did hamper my fun with one teleporting me above the map, causing me to fall to my death, though thankfully I had only lost about 10 minutes of play thanks to the auto save system in here, and yes, you can manual save in up to 4 separate slots for those that are paranoid about death.  Climbing can be finicky, opening drawers and doors can be way too challenging, interacting with items can also be jank and the stealth mechanics seem to be hit or miss but, when it works, it makes for a very engaging survival game and one of the most in-depth ones available on the Quest 2. 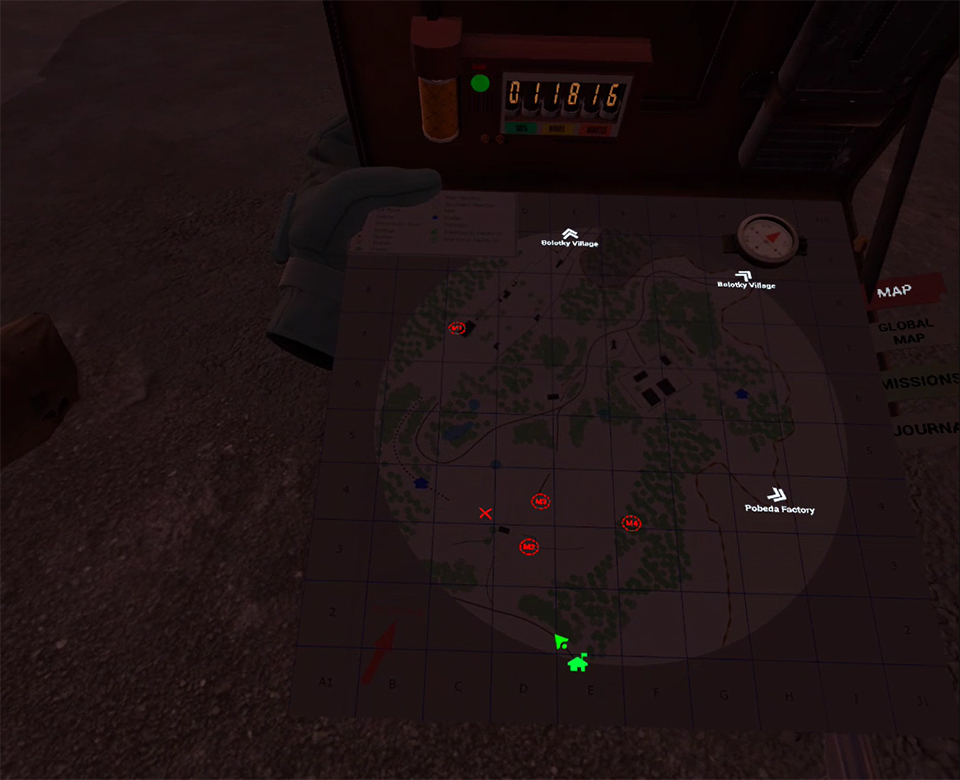 Your map is an incredibly handy tool.

I’m not going to say I love Into the Radius as it’s largely not a game genre I’m typically in too, but I will say, after my 1st hour or so in the game, it did start to hook me.  There is a story here that does explain why the Radius exists, but it does feel almost tacked on with your survival and the need to push ever forward being the real reason to play.  If surviving in surreal apocalyptic wilds sounds like your type of game, then I bet you’ll dig just how in depth this can get.  For those looking for something a little easier to digest, Into the Radius may challenge your patience with reward only coming by grinding your way to the end.

What would I pay? There is plenty of game here with the missions taking well over the 15-hour mark to conquer, though the game can be pretty slow at times.  With that said, there is quite a bit of value for $30 US and it’s easily one of the bigger games available in VR and once you look past the presentation, it’s a solid survival game.

CM Games provided The VR GRid with a press code for this title and, regardless of this review, we thank them for that!