Why does PS4 VR Matter?

A lot is riding on Sony’s venture into VR, specifically, the entire VR industry.  That’s not to say if PS VR fails VR will also fail but rather that if PS VR fails than it will be set back a few years.  VR is here and now and it’s not going away, nor should it.  Advances in technology have allowed VR to finally be available to the masses at a somewhat affordable cost.  With introductory headsets starting at $20 or so (plus a smart phone) and others ranging all the way up to $1200(plus a high end PC) and even a few beyond that, you as the consumer have a tonne of option…and that’s not necessarily a good thing.

Although the idea of Virtual reality and its implementation have been around for decades, never before has I been so easily accessible…and confusing.  Never before have I seen a market so flooded with devices and upcoming devices to bring the virtual world to your home.  Just check Kickstarter, it seems like everyone out there is trying to get a piece of the VR pie when that pie hasn’t even been baked yet.  To elaborate, PC sales (Occulus Rift & HTC Vive) have hit a wall with something like 0.3% growth in the month of August and that’s largely to blame on high price point and a lack of established titles.  Mobile VR headsets (Samsung Gear & Cardboard) are great at what they do which is low end VR experiences. That’s not to say there isn’t amazing apps on these devices, there are, but the compact technology limits what you experience. 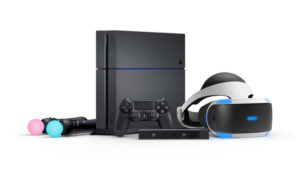 The VR bundle that may just change the industry

That’s where PS4 comes in. Although not as powerful as its PC counterparts it has advantages that no other device on the market has, specifically install base.  With an estimated 25 million people around the world already owning a PS4 this may be the cheapest top of the line VR available for a while.  The bundle for PS4 VR is $600 is America and that doesn’t include the PS4 console itself so if you haven’t purchased a PS4 yet than you are looking at roughly $1000 for Sony’s VR.  But they are bringing something to the market that no one else has yet, established brands and titles.  Coming to VR are franchises like Call of Duty, Doom, Resident Evil and Fallout with plenty more on top of that and if market sales show anything, people tend to buy what they know.

Not to mention the ease of setup.  PC has done, in my opinion, a terrible job of selling VR to the masses relying almost solely upon word of mouth, and that campaign has not been all positive.  The “room” experience that the Vive offers is unique to VR and should be a bigger deal than it is, but with titles that feel more like demos than games, the Vive feels more like a gimmick than the next big thing.  Add to that the overly complex setup for it along with the usual PC updates and it’s no wonder why the average gamer hasn’t run out to buy one.

However not all is lost on PC because inevitably VR games released on PS4 will come to PC which should give that market a nice boost.  But that all depends on PS VR sales.  If no one buys the unit (pre sales are sold out) after its initial release, than that could spell trouble for VR.  PC sales were all sold out when they were released, but as I mentioned above quickly lost steam and now sit on store shelves.  If people latch on though, than a baseline will have been set and VR makers will know what they have to do to sell.  Sony is backing their VR pretty hard and even though it is less powerful than both their PC counterparts it may breathe life into a market that still hasn’t caught on to all the things the current generation  of VR can do.   October 13th is the release date and I’m pumped!!!!