HOVR is an interesting game and a throwback to boarding games of old with a nice little plot to help it along.  Downloaded from the Oculus Store for $2.29, you get a snowboard (hoverboard in this case) type game taking place in a dystopian future.  You as a hacker are out to destroy the “Serve”, a machine that keeps the populace suppressed.  You must race against your fellow hackers and try and save the world! 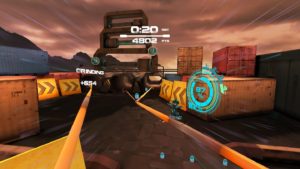 Massive air and rail grinds are the name of the game here!

What this game does right that so many do wrong is give us a video that explains the world around you and your objective.  So many VR games fail to engage users with story hoping the “immersive” experience will just hide the fact that you have no idea what you are doing, so props for that.  Even the menu is nice with the options scattered around a room full of pop culture references.  Also good! Once you start the game though, flaws begin to show.  The visuals, while in no way are awful do feel a little dated.  All the characters are cartoony and look fine, just a little blocky upon close inspection, which really only occurs during the menu.  The world you play in also looks a little drab with browns, greens and oranges are used with reckless abandon though the actual tracks you are on are littered with enough objects and obstacles to distract you from the omnipresent environment. The tracks look great though, especially jumping on roof tops and cruising through tunnels.  The last note on visuals would be the draw distance…it’s just too short.  Often the world ahead of you is appearing just seconds before you get to it and that hampers immersion, especially when the later levels open up and have you reaching crazy heights.

The audio as well is standard for the genre.  Enemies taunt you with one liners as they attack you and typical of the genre they repeat themselves soon enough.  I did enjoy the soundtrack which comprised of a few vocal heavy rock tracks and some voiceless music as well.  To me those tracks were a throwback to the days of the SSX series and in fact this whole game is a great VR adaptation of that kind of play style. 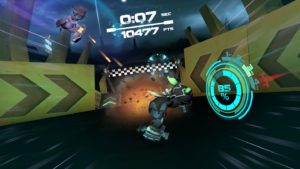 Speed boosts, weapons and massive jumps are here for your hover boarding enjoyment!

Controls are super simple and you only require the Gear VR headset to play.  Tilting your head controls your boarder and touching/tapping the touch pad uses boost or performs aerial maneuvers and tricks.  Speed boosts and ramps have you soaring through the air allowing you to perform tricks.  The more you perform and link up, the more points you get.  Points are needed to both upgrade your character and unlock levels.  It works, and I didn’t think it would.  Tapping the touchpad to link tricks becomes more of a timing challenge than anything else and is fun.  My biggest issues with this game are that you can pick up weapons to use against your opponents and they can do the same.  Getting hit by a weapon stops any tricks you were doing and prevents you from performing anymore until you touch the ground again. The other issue I had as it seemed like it was impossible to unlock the next stage until you unlocked the next character upgrade where upon the next play through gave you enough points to advance, it seemed more like a cheap mechanic to extend play time as opposed to offering achievements or challenges specific to levels.

Make no mistake, I had fun with this game.  None of the issues I mentioned above hamper the fun you will have playing it, though on occasion it seemed like I was getting pelted non-stop by enemy weapons destroying my chances at getting a high score during that run. Currently available is only 4 levels but these offer many different paths so replaying them isn’t completely repetitive and getting close that next score to unlock the next level will have you playing again because as you play, you do get better.  While the visuals aren’t the greatest, they are in no way awful and the gameplay will have you more focused on besting your previous score than admiring the scenery anyways.  One final note is while the game introduces a story, in its current version, there is no resolution to said story making that side of the game feel incomplete.  The developer has stated that more content is coming, but it’s not here yet.  There is a solid game here, and although it is missing a few features, HOVR is still worth your time and money.