Hot Dogs, Horseshoes & Hand Grenades is a VR gun simulator available on HTC Vive, currently for $20 and also in it’s Alpha Stage.  It is sandbox game with a few levels and a variety of choices of firearms.  Before we get into the game, be aware that game has a single very talented developer updating the game every other week. 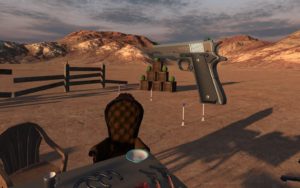 It may not look so pretty, it’s what’s inside that counts(I’m referring to the gameplay in case you didn’t get it, which is great!)

HH&H is a gun simulator, in which you select the gun, spawn it,and after you pick it up, learn how to use it. With multiple classes of weapons including handguns, SMG’s, Carbines, assault rifles, sniper rifles, shotguns and explosives there is a fair amount of destructive power to choose from. Every gun behaves as it would in real life, attention to detail is the jewel of this game and as such some guns can be complicated to use. It feels as if you were actually holding a firearm.  By using the Unity engine, it has very impressive physics system, so you can do all sorts of fun stuff.

The other standout is the ‘Weapon Attachment’ system, a unique feature to the game. You have a large list of scopes, lasers, suppressors and rail adapters. Scopes behave most realistically with an up to 60x scope option to hit long range targets and rail adapters create the most imaginative of weapon customization. Weapons come with multiple bullet types including incendiary, tracers, armour piercers and more.  Each of them behave differently and with the option to enable bullet tracers, you can follow your bullets trajectory, adding to the fun. Bullet ballistics are fantastic and it makes game so much more realistic and immersive.

There are 13 different levels but some of them are very questionable as the developer is expanding and experimenting with game’s possibilities, but not all them may be worth playing. There are very practical ones as well, in which you can choose the range of your target or have a device which shoots clay materials in air for you to blow it up by shooting at it. There is room breaching level as well, but level design isn’t this game’s strong suit.

Guns are very well designed, texture and reflective surfaces are very realistic. Counter to that are the particle and lighting effects, which are not great and sometimes make the game look very dated.  The environments you are in do their job and while they aren’t remarkable, they don’t detract from the game. Sound isn’t perfect but it is dynamic and very loud, as it should be.  One note on the visuals; there is a very good reason to have garbage boxes available on every level, because rendering too many guns at same time, can actually crash the game.

My biggest issue with this game is the new direction the developer is taking. He is updating his game every two weeks and he used to only work on weapon related features. Now he decided to go in to the horror genre, which was very questionable, building AI system, robot enemies and scary meat grinder factories with scary rooms.  Even though new direction of the game has missteps, I still recommend it as it is without a doubt the best Gun Simulator game on the market.