So you have crashed landed on a planet known to be victim of a Robopocalypse (in game term, not mine) and you must fight your way off through endless waves of robots….sounds simple enough.  Downloaded from the Occulus store for $3.79 this is a run of the mill Gear VR FPS experience adding nothing new to an increasingly crowded genre. 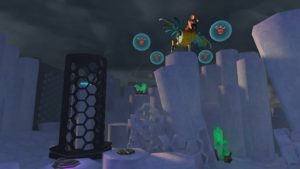 Yup, that’s a giant robotic chicken…NOW BOW DOWN TO YOUR NEW ROBOT OVERLORDS!!!

Visually I thought this game was one of the most generic looking games I’ve ever seen.  Visuals aren’t terrible to look at, but everything just looks bland.  Environments and backgrounds look washed out, while enemies lack any real detail, even when they are right in your face, with the exception of the bosses, who for some reason are large robotic animals.  The Audio, as far I can tell consists mainly of 2 sound bites; a beeping sound that might just drive you insane, or a ridiculously annoying looping song that also tries it’s best to bore into your skull through your ear holes…not fun.  There are a few other sounds of course, but the 2 I mentioned ruined any enjoyment from any other audio.

This game is a horde style type whereupon you are stationary as enemies swarm around you.  Besides moving your head, the only other in game movement is handled by nearby waypoints that you look at and beam too.  Only requiring the Gear VR headset (Bluetooth is supported), every action in this game is handled by your gun, whether it’s shooting enemies, destructible pieces of the environment, simple puzzles, or moving from platform to platform.  Enemy’s swarm all around you and in some levels are unrelenting and cheap, appearing wherever you aren’t looking and killing you. This game offers a lot of stages and hidden collectibles, but every stage, minus the boss battles, begins to feel more and more like previous levels before it 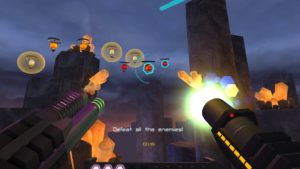 The draw distance is good, it’s the details that disappoint.

There is a fair bit of content to get through here, but the repetitive nature of this game will probably make you quit after you beat the 1st boss.  Added to that is the annoying audio plus boring visuals and you’ve got the perfect recipe for a bland, boring and uninspired game.