The description in the Oculus store says “gear up as Jack ‘Knife’ Devers, last of the infamous Dogs of War and wage a one-man crusade to save the solar system from the robot hordes.  If that sounds simple and awesome to you, that’s because it is.  Downloaded from the Gear VR store for $5.79, this game is worth every penny and your time.  You will need a Bluetooth controller to play this bad boy and if you don’t have one, this is the game to get it for! 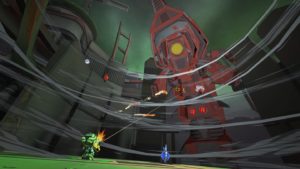 The boss battles are epic and fun!!!!

Gun Sight is a side-scrolling VR shooter that maximizes what the Gear VR can do, and more importantly sets the bar for this VR genre.  Visuals are crisp and clean using a cell shaded look very reminiscent of the Borderlands series.  Enemy robots have a wide variety of looks, attack from all directions and even though most of the action takes place directly in front of you, often you’ll find yourself looking around as enemies appear out of your regular field of view.  Boss battles stand out as a shooter equivalent of the God of War franchise.  They are massive and you can only experience their scale in VR…it’s awesome!! Visually, this game is outstanding.  The one detracting note is that the camera occasionally feels too close, having you really turn your head to see enemies around you. It’s a minor annoyance and hinders your view of the level visuals as well.  Levels are stunning in both scope and scale but if you aren’t looking around a lot, you may miss some of the grandest levels in mobile VR so far.

The audio itself leaves a little more to be desired.  A simple looping 80’s rock track accompanies every level in the game and mission intros are given only through simple text messages.  As Jack, you deliver a few one liners throughout a mission, but they start to repeat themselves quickly and wear out their welcome soon enough.  Nothing game breaking, but given how solid the rest of the game is, a little more audio polish would have been nice. 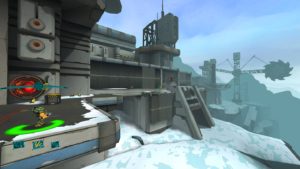 The level of depth and scale is impressive here, the world looks endless!

Gameplay is of the standard run and gun shooting variety, but where you look is where you shoot, with a little auto targeting helps you out.  The action takes place all around your character with wave after wave of robots trying to end you.  The campaign game comprises of 4 stages with multiple levels each and boss at the end of them. Other modes include extraction, which has you racing toward an extraction point before the timer runs out.   That mode is unforgiving and fast paced, but any screw ups will have you restarting the mission.  Thankfully they are short so death doesn’t hurt so bad.  The other mode is a horde style mode which has you defending waves of enemies in a small area; fun times if you’re looking to destroy some baddies.   To help you on these missions are a few heavy weapons and power ups scattered around each level, typical for the genre.  The ability to jump here also help at evading the enemy swarms.

This game is a treat and, audio aside, is a fun, amazing experience.  The only game I have played similar is Smashing the Battle (my review here) and this surpasses it in every way.  This should be a staple for you VR collection, as long as you like run and gun shooters.  Fantastic visuals and solid gameplay along with the epically large set pieces will have you clamoring for more.