This is something different.  I feel the need to point this out right away as this is not a game…I mean it is, but it isn’t.  Fated is a pseudo interactive VR movie/game with a heavy emphasis on narrative story telling as opposed to the more traditional style of interspersing cut scenes in between levels.  What all this means is that this is just flat out not going to appeal to everyone, but for those still intrigued than this is a unique VR experience not to be missed. 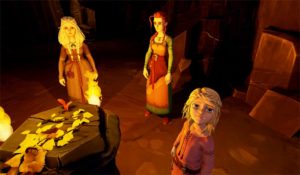 Your family/companions in this emotional journey

The story is a Norse adventure whereupon you have struck a deal with the gods(or a god as it were) to come back from death to protect your family.  There are a few catches though, most notably is your lack of voice, secondly is that you have lost your memories.  This relegates you to being a silent bystander during a few conversations early on, following behind people and events.  It’s not until Chapter 3 where events take a dramatic turn and the excitement gets ramped up.  The plot revolves around your efforts to keep your family safe in an increasingly chaotic world.   This is a fantasy adventure and without spoiling any of the plot, you will see some fantastic sights.

The game mechanics here are limited.  A DS4 is used to navigate in stages that allow it, while other levels implore context sensitive situations requiring the use of a game mechanic that you probably won’t see again.  Early on you are given a bow and tasked to hunt some Elk(?), Left trigger brings up the bow, Right trigger fires…standard stuff.  Shortly thereafter you are behind the reigns of a horse drawn carriage utilizing the trigger buttons to steer right and left.  It works, but these “game” moments seem to only serve to add a bit more depth to the narrative than much else.  A few puzzles are scattered throughout your adventure, but offer little in the way of challenge, just some memorization and visual cues.

The one mechanic that does stand out is the ability to nod or shake your head in response to Yes or No questions.  It’s such a simple mechanic, but when characters await your response and act appropriately after the fact, you can’t help but feel immersed in the world and story.

I have a few issues though, most notably the pacing, especially early on where you are basically forced to listen to people talk with nothing much else to do.  Tasks given at the onset are next too pointless as well.  The speed at which you walk is also painfully slow, and while I see the reason why (so you can’t get ahead of the story) you can’t help but feel restricted by your plodding movements.  Secondly is the appearance of choice when it comes to story progression.  While your ‘Yes’ and ‘No’ answers illicit different responses, this is ultimately a linear experience.  Complaints aside, this is probably the most immersive movie I have ever played through, you just need to look at it like that or you’ll be disappointed

The visuals are good, utilizing cartoonish, exaggerated characters and a colorful palette to make this world come alive.  Later stages involve catacombs and forests that look great given the art style.  There isn’t a tonne of detail here, but it’s polished and clean.  Certain areas of this game stand out with amazing amounts of details (look at the bats!) and as the game takes a more fantastical turn those latter stages shine as well.

The audio is top notch with some great sound effects and voice acting….mostly.  Ambient sounds are crisp and clear and the world around you sounds alive.  While the voice acting is well done, it isn’t perfect and the spots where the acting isn’t the best (the kids) will stand out a bit.  Still, overall the good out-weighs the bad by far. 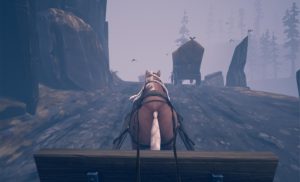 One of the most harrowing moments in the game!

Like I said, this plays out like a movie.  It’s linear, even with the appearance of choice, and its pacing is definitely all over the map.  That said it has some stand out moments.  Riding the carriage in Chapter 3 was one of the most exhilarating moments I have had in gaming.  Also, as you get more invested in your family accompanying you on this quest, you can’t help but get attached to them.  When the story comes to its dramatic conclusion I was felt wanting more.  The ending didn’t feel like a conclusion, but rather a pivotal point in what should have been an ongoing adventure.

I absolutely believe that this is an experience worth investing your time and money in, but like I said at the top, this isn’t going to appeal to everybody.  It’s an interactive movie clocking in at less than 2 hours with some standout moments.  I was emotionally attached to the characters, and was concerned for their fates, it’s just too bad there wasn’t more.*

What would I pay? $10 US seems apt.  Like I said, Fated has some standout moments that can only be experienced in VR, but the erratic pace in both gameplay and storytelling hold this back from greatness.

Frima Originals provided thVRgrid with a review copy of ‘FATED: The Silent Oath’ and regardless of our score we are thankful to them for their generosity.

*Apparently this is an episodic title with ‘The Silent Oath’ being only part 1 of 3.  This does raise a few issues as far as price point, but after I read that, I was happy to getting more story regardless.