The name of this game says it all.  Faceted Flight has you taking control of a ship of your choice and navigating through different, canyon styled environments.  Downloaded from the Oculus store for $5.79 and requiring only the headset controls, this offers a simple flying experience that, although fun, wears outs its welcome after a few play throughs. 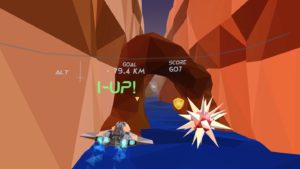 The visuals here get old…fast!

This games visuals are reminiscent of the star fox series with simple, polygonal art comprising everything you look at.   Initially, I thought the visuals were good enough, but after playing through a few stages, they began to grate on me a bit because of their bland, repeating nature.  The art style serves its purpose, but doesn’t really lend itself to continual enjoyment of the game.  The audio as well sounds like a looping techno track that fits the game just fine.

Controls are simple enough as you simply look where you want to go and that’s it.  Propulsion is handled by the game.  Looking where you want to go works well enough, but I encountered problems with collision detection where I would pass through scenery and survive, or avoid an object and still be destroyed.  Those issues seemed happen enough to make this game feel slightly broken.  Another issue I had was with in-game slowdown, which seemed to affect my controls as well.  With that said, the game is fun and a decent flight sim, but with no real difference in level design other than color scheme it just gets old fast. 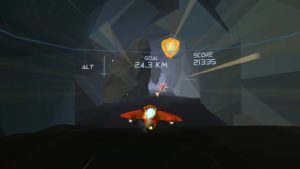 Flying through caves is alright. Just don’t fly to high!

It’s fun enough, and when everything works, flying around obstacles at a fast speed is satisfying.  However, with limited amount of levels and level differentiation this game just wears out its welcome.  Add to that the glitches and this ends up being a pick-up, play and never play again kind of experience.