After playing the demo for this game I ran out and nabbed it up as soon as I could.  I thought the premise worked great for VR; a Horror, shooter, rollercoaster ride.  Color me sold!  If you have ever played any light gun shooters(House of Dead, Time Crisis…) than you will feel right at home here. You can use either a Dual Shock or two Move controller, but I would recommend the move controls and they give you full freedom of arm movement as opposed to the stock controller which anchors your guns together to match your movements. 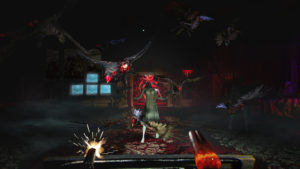 Killing ghouls John Woo Style isn’t so bad is it?

Comprising of 7 levels taking pace in different horror locales (slaughter plant, haunted hotel etc.) RoB delivers every trope of the genre in gory fashion.  Levels look great with fully realized outdoor levels as well as perfectly claustrophobic interior levels and everything in between.  Enemies also come at you in all forms ranging from crazed birds all the way to monstrous nightmarish ghouls.  I don’t want to spoil too much but the visuals here are great and a joy to watch.  The audio also lends itself to the game with enemies appearing from all sides only signaling you by groans or screams.  You’ll need a good set of stereo headphones to experience the surround sound present here.

Armed with 2 guns from the start with available power ups throughout each level, you are tasked with surviving to the end of each course (10 to 15 min or so) and facing a boss type battle each time.  Enemies come at you at predictable spots in each level and on normal difficulty, you should have no problem dispatching them.  The hardest mode only gives you one life so death results in a level restart as opposed to a checkpoint close to where you died.  Scattered throughout the levels are various targets to shoot, as well bonus items that increase your score.  After you’ve completed a level, you are treated with a short cut scene advancing the plot, along with local and worldwide leaderboards.   All of that is just padding as not shooting any targets jut results in a lower score, so if you care about your standings, go crazy, but don’t stress to hard if you miss a bunch, they don’t matter that much.

All of that sounds good, the problem is it just gets old.  Every level plays out the same so while the levels and enemies change, the game stays the same.  Enemies show up at predicable moments as do the jump scares.  After the first few stages I realized I knew exactly when enemies were going to show up and was right most of the time.  Mixing this up are boss battles which do add slightly different enemy mechanics to the game, but are pattern based so once you figure out the pattern you can dispatch them easily enough.  Playing in smaller doses may be the way to keep enjoyment going in this game as crushing it in about an hour and half had me a little sick of the monotony.  Scattered throughout each level as well are different paths to take so replaying stages could result in a slightly different experience. 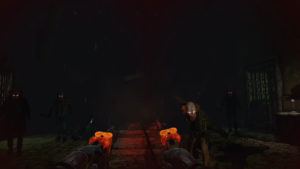 If you hate clowns, in this game you get to kill a lot of them..it’s like therapy!!!

It’s fun, don’t get me wrong but it does get old.  The story and narrative in this game are minimal, but do the job pushing the game forward.  If you are a fan of horror than there is fun to be had here, but if visual terrors aren’t your thing, than you may tire of this game, fast.  Still, this genre is lightly populated in VR and it does the job adequately enough to warrant a recommendation.   Maybe just play in short doses.

What would I pay? $20 is perfect.  What’s here is typical of the genre but it’s a great showpiece for for friends and every time you see them play, you’ll feel the urge to play again yourself.