Who doesn’t love a good ol’ fashion Fantasy action game with some puzzles splashed in for good measure?  Witching Tower is exactly that with you taking on the role of Anna, a recently captured fugitive who is needed by the evil queen to do some very important things.  Shackled in chains, it’s up to you to escape the clutches of the Queen and dispose of her undead horde by any means available to not to only save your own skin, but maybe the world’s as well. 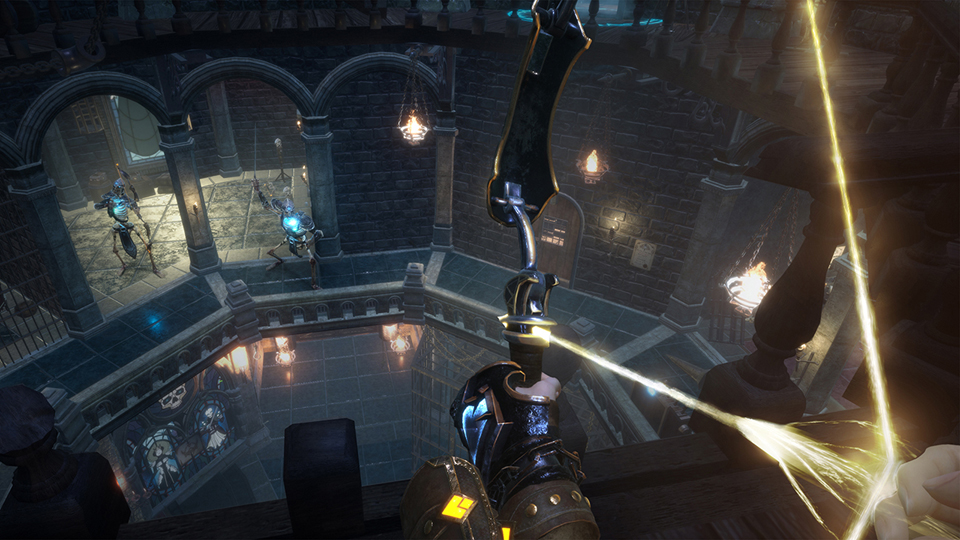 The archery is fun, though the melee is more satisfying.

Tracked Motion controls are in full effect here with you controlling Anna in first person view.  The opening stage acts as the tutorial and teaches you the basics with you being able to grab many items around you as well as introducing you to your ‘Spirit vision’ which adds a filter to the world and lets you see some spectrally illuminated objects that aid you in solving puzzles, very similar to the mechanic in The Twilight Path.  Combat initially involves just whacking stuff with a torch, eventually picking up a bow, sword and a few other optional weapons carried by enemies you encounter.  The enemies are only triggered by getting to close, whereupon they typically rush you and are easily dispatched.  Bats and Dogs can be handled with ease while skeletons and larger enemies have their attack own patterns to figure out.  You also have a magical tether that lets you pull specific items toward you, maybe a needed key out of reach or to collapse a balcony containing an enemy archer and is great mechanic to keep you thinking.  Full locomotion is available and while the combat apparently has a parry system in place for more immersive battles, it’s easier to trigger attack animations, wait for the enemy to expose his weak spots and waggle away.  Ghosts constantly block your path but are tied to a physical item nearby that needs to be placed in blue flame to dispel them and clear the way. There are some hidden cards lying around that apparently power up your sword and act as collectibles and should you miss 1 in a stage, the game asks you if you want to leave the unfound cards behind, though I never noticed any difference in my weapons appearance or power.  The PSVR supports the 3dRudder and it works just fine allowing you to navigate the environment with a little more ease save for when you need to stop and interact with an object on a table or wall.  When this  happened I was forced to remove my feet from the rudder as leaving them on would cause my character to back away from what I was grabbing.  It’s an easy issue to get used too, but I feel a little more optimization is needed to get full use out of that peripheral. 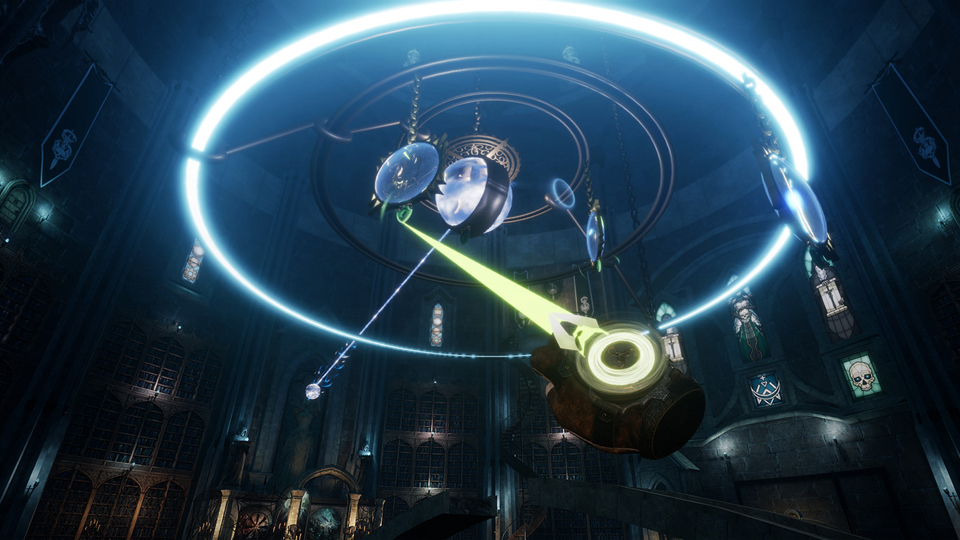 The tether mechanic is pretty slick.

The Witching Tower looks really good whether on a PC or PlayStation headset.  The stages aren’t typically too large, allowing for a more contained experience and the tower you are in and on does carry a fair bit of detail.  It’s a fully realized structure with some fantastic indoor and outdoor stages ranging in some relatively small levels to rather large rooms loaded with a wide variety of enemies, items and other castle-centric objects.  Stone walls surround you, but the sheer amount of detritus strewn about makes this castle feel lived in, which is ironic as the only residents seem to be of the undead variety.  Strewn around the tower are papers and posters that explain the histories of the world as well as some fancy voice recorders which offer information about the tower.  Lighting effects are pretty sweet and enemies look good, but do have some stiff animations at times.  Texture detail is spot on and as far as visuals go, this is one of the better games I have played.

The music playing is subdued and ominous, but to balance that out is a spirit skull who aids you in your initial escape and accompanies you on your journey.   Skull talks to you offering hints to your current predicament or just reacting to your action or inaction’s in a very sarcastic manor.  I appreciated his presence by my side as, by design, the castle you are in can feel lonely at times.  Combat sounds are great as are many of the ambient effects or moving items you may stumble across throughout the game and like the visuals, the sound design is solid. 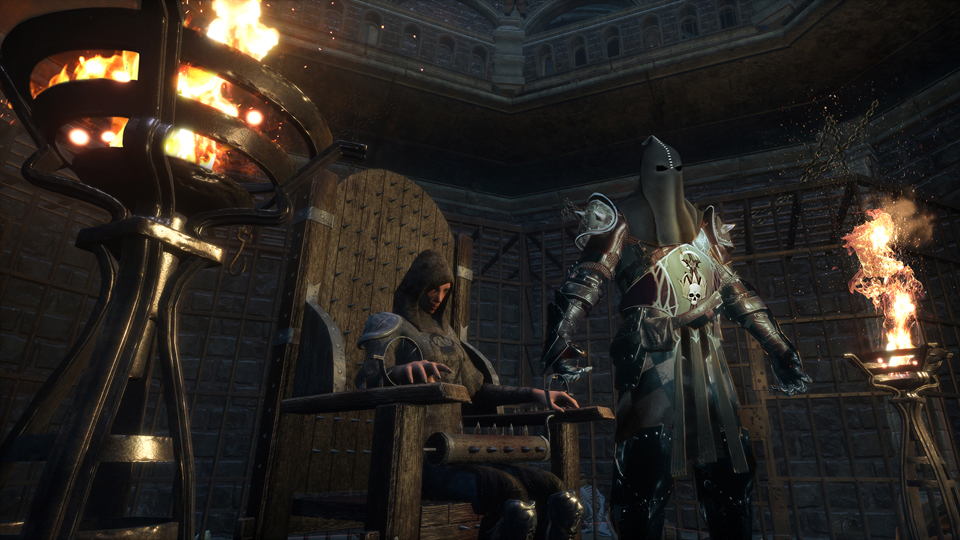 The Witching Tower can be beaten in under 3 hours which is by no means a bad thing.  I lamented the combat earlier as being a little simplistic and thus easy and the puzzles fall into that same line.  That’s not to say they are simple, but they are never really difficult with solutions being fairly obvious from the 1st to the last level.  Your spirit vision makes short work of most puzzles that need it and I did appreciate that puzzles almost never repeated themselves in the game making each one feel fresh.  In this regard, once again I will compare them to The Twilight Path in that you’ll never be bored by the next puzzle you run into, but they won’t really ever slow you down either.   Should you get stuck, each puzzle typically has a cheat button that will give you a clue to help you and even your little skull buddy might aid your efforts.  Other mechanics include the ability to take control of skeletons, forcing them to move on pressure plates or pull levers that you can’t reach.  I ran into some collision detection with my bow where it often ran into myself, stopping arrows from being fired and I even got stuck in the environment a handful of times, forcing me to move in the real world to unstick myself.  None of the issues I had break the game but did hamper my fun from beginning to the end of it. 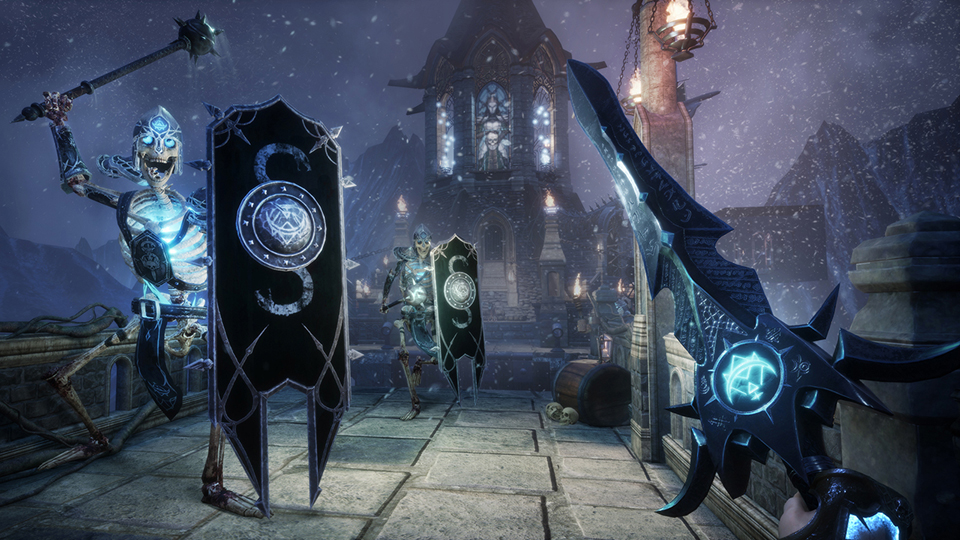 They look tougher then they are.

The Witching Tower elicits feelings of being back in Skyrim, only on a singular expansive quest with a fair bit of story.  The combat and puzzles can be simplistic at times, but I can’t deny the creativity behind many of those brain teasers and they kept me on my toes as I figured out exactly what I needed to do.  I enjoyed the tether mechanic and the spirit vision and when you combine all the elements at play, you get a streamlined fantasy experience that looks great and still offers a lot of fun.  If you dig exploration, combat, fantasy and puzzles, then I bet you’ll have a good time exploring this tower and defeating the evil queen.

What would I pay?  The $20 price tag is perfectly fine for this.  I enjoyed the story and combat along with the puzzles and while the entire game could be described as being on the more casual side as far as difficulty goes, I still had fun!

Daily Magic Productions provided The VR Grid with a code for this title and, regardless of this review, we thank them for that!