he Assembly is a first person adventure game set in the near future with some puzzle elements and a sci-fi narrative, and is available for the PlayStation VR HTC Vive and Oculus Rift.  You play as two different protagonists, one of whom works for the mysterious organization that is ‘The Assembly’ and has serious doubts about their ethics. The other is performing a series of tests having been kidnapped for an extended job interview with this secretive corporation.  The latter character’s arc is where most of the games puzzling comes into play.  This game was reviewed on a standard PS4 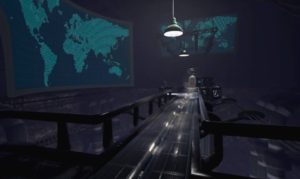 The entrance to one of the most interesting puzzles of the game.

The game is controlled with a DS4 with no Move support which was a disappointment but the DS4 works very well.  I found changing from the default scheme to a more typical non-VR game scheme worked best for me.  nDreams has only just announced this Monday that motion controls are coming to all VR versions, with a patch for Move being released before the end of December.

For the most part the game looks great with some interesting futuristic art designs, the kind you might expect in a secret underground scientific lab facility but the game is let down slightly with low resolution non-player character models and far too many jaggies for my liking.  They are not distracting enough to spoil the game though.  The voice acting and sound design are both excellent throughout, in particular the two main protagonists casting choices were spot on.  What I found bizarre was that there is no way to delete your game save.  If you use all three slots, then having finished the game there is then no way to start the game from the beginning as there is no chapter select option either.

You are thrown in the deep end as far as the story is concerned with no prologue or opening introduction.  This is a good thing as it adds a lot to the mystery.  The more I played, the more I was intrigued to find out about what was going on.  The female lead, disgraced doctor Madeleine Stone, is mostly focused on solving puzzles as part of the interview process for the company.  When the first set of puzzles were displayed I thought, ‘Oh here we go again’ with a standard series of 3D block puzzles that were easily solved within 3 minutes.  But as you progress through the game with her the puzzles become super interesting.  In one such puzzle they incorporate decisions that potentially could affect the lives and deaths of hundreds of millions of people and testing your moral compass in another series of puzzles.  At no point did they feel forced like they can in some games and were weaved into her story in such a way that it felt necessary for her arc.

The male protagonist Cal Pearson’s story is more about exploration and digging deep into the secrets of the company and its staff.  As soon as you come to a pivotal moment with each character, the game switches to the other.  The over use of opening drawers, lockers and cupboards with Cal started to grate as time went on, especially considering almost all of those containers in this game can be opened and for the most part they are all empty!  There are very few objects to be found in them that you can actually use.  That aside, Cal’s determination to expose the dark goings on within the company is compelling.  Much of the story is exposed through reading emails on other employee’s PC screens as well as picking up company dossiers that have been carelessly left lying around.  There are some cool references to AI lore and the ‘Hitchhikers Guide’ series of novels for those that are versed with that universe.  The exploration of AI too, is a particularly engrossing element in the closing chapters of the game.  I had immense fun exploring all the possible personalities of the companies AI system. 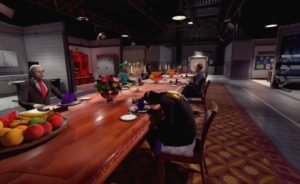 ‘Hey waiter, there’s a dead scientist in my soup!’

I became very immersed in The Assembly, to a point where my senses were tricked on a couple of occasions.  At one point I opened up a yellow medical waste bin and being familiar with that smell my brain was tricked into smelling it upon leaning closer to look at the bins contents!  And upon going though decontamination the first time, this reviewer swears he felt the steam on his face that was coming out of the circular vents!

The Assembly is an interesting, compelling game to play with diverse unusual puzzles and an engaging story.  It took me around five hours to finish it though that could stretch to about seven hours if you take your time fully exploring the world.  I was fully rooting for both characters and was glad to see their respective conclusions but found myself wanting more.

What would I pay?  I would pay $29.99US for this game.  There is not much re-playability other than for the trophies but it is a thoroughly engaging experience and well worth the price tag.  If story driven sci-fi puzzlers are your thing, you’ll love this if you can forgive its minor niggles.