The future of sport is here!!! Alright maybe not, but the premise behind this game has been around a while.  Currently available for $50, you are a competitor in the World’s most exciting sports game.  The Mechanized Combat League has you getting behind the helm of a fully armed robot and competing in some 3 on 3 destruction.  It’s a premise you’ve seen in movies, and other games before and although it has single and multiplayer components, it’s hard to tell the difference between them. 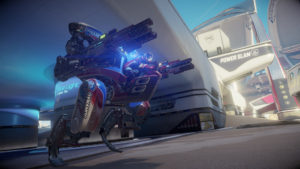 Everything here is just crisp and clean and a joy to look at!

What this game does deliver is polish.  It looks fantastic! Your mechs look great and are loaded with detail.  Looking around from your cockpit you get a nice view of the mech around you, as well as your body, which moves as you move.  You are going to want to pull up a chair for this one and get comfortable as all the action takes place in front of you.  Of course you can turn your robot 360 degrees, but as the pilot is stationary, so are you.  Everything visually is polished.  Mechs have a tonne of detail, character models look good, arenas and environments look great as well, hard to ask for a more with this eye candy.

Audio on the other hand leaves something to be desired.  Sound effects sound great, machine guns and other weapons along with explosions all fit the game perfectly…it’s the rest of the audio that falters.  Commentary is very basic, reminding me of sports games from 2 decades ago.  Very generic descriptions of the actions along with the fact that what the commentator says doesn’t really match what’s happening had me making faces every time and you don’t have to wait too long before you start hearing the same phrases way too many times. Your manager (?) is also present throughout the tutorial and the game and become a constant annoyance as he tries to keep your morale high.  He also repeats himself…a lot! No other characters talk, which is jarring in the before and after match cut scenes where they silently acknowledge how good or bad you did.  It’s off putting.

Gameplay is also solid, but limited.  3 on 3 action is the name of the game and after a ridiculously lengthy tutorial that assumes you have never played an FPS before, you start the actual game.  You can pick your teammates and as you progress in the game you can afford to unlock better everything.  Sponsorship challenges offer extra loot and that loot allows you to purchase better mechs and teammates.  There are only 3 types of games here.   A free for all type game where your goal is to rack up the most kills.  A capture the flag game where you must get the ball and bring it to the enemies’ zone, and the final mode has you getting into “overdrive” mode and literally jumping through a hoop to score a point. 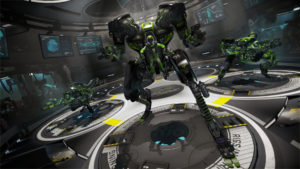 It all works and as you progress through a season you are forced to play through all these modes.  I found though that when I lost, it wasn’t just a loss, but rather a complete blow out.  Losing in this game is frustrating in single player because even though your on a team; it doesn’t really feel like your team helps you.  Overall though it wasn’t too bad and I definitely won more than I lost.  The cut scenes you are forced to view before and after need a skip option in the worst way.  They play out almost identically every time and serve no purpose except to remind you how awesome you are or how much you suck.  Multiplayer plays out the exact same way, although you get the added bonus of hearing your teammate chatter so more often than not you’ll be muting those mics anyway.

It’s a solid, if not slightly shallow, experience that I enjoyed while I played it.  That said, once I completed 2 seasons and a few multiplayer matches, I was done.  The only difference between multi and single player really is that if you have good human teammates than coordinated a strategy would be a breeze, otherwise it always feels liking your riding solo.  Besides the mech unlocks, everything else you unlock is superficial and just changes the look of you character.  So without any kind of single player story, once you have played this game for an hour or two, you have seen all it as to offer and unless you are striving to be at the top of the leader boards, there isn’t much reason to head back into the arena.

What would I pay? $40.  It is solid, no doubt about it, but the few modes just didn’t do a whole lot for me.  If you are looking for some online multiplayer fun in VR than this is a must buy.