They say imitation is the greatest form of flattery. Well Beat Games, creator of VR super hit Beat Saber, should be supremely flattered as we continue to see more and more VR rhythm games trying to emulate both its core gameplay and its barnstorming success. This has now reached something of a zenith with Music Escape, which is the most brazen imitation (rip-off?) of Beat Saber that I’ve seen. For those that don’t know, the idea here is to hit shapes with light sabers as they stream past you, in time with a thumping EDM track and in the right direction by following arrows on the shapes. Music Escape aims to add something new to this formula by introducing some additional weapons and a battle mode that replaces generic shapes with (evil?) teddy bears. Why teddy bears? I have no idea… 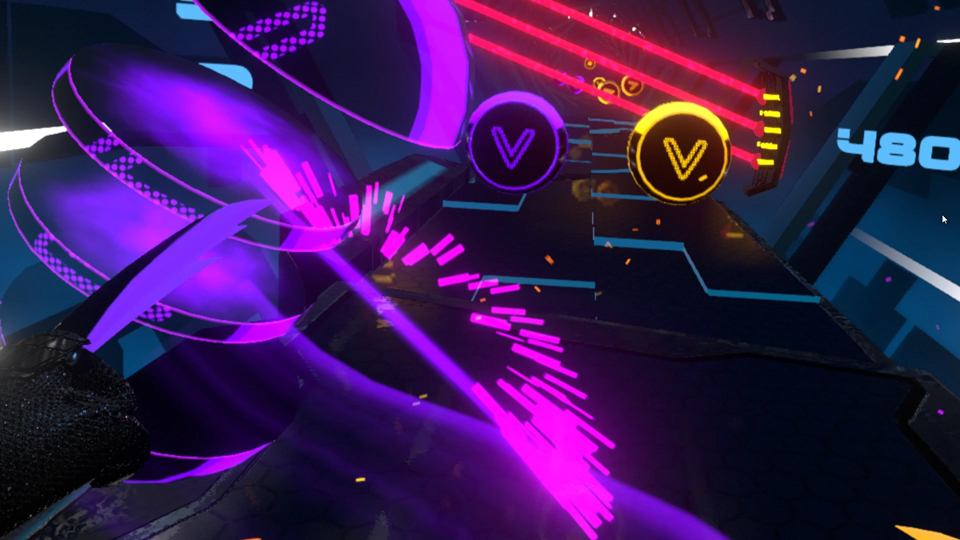 Cut the notes in the direction indicated!

Has 2049VR pulled this off? Unfortunately not. Not only is there a distinct lack of any innovation here, but the level of execution is many, many rungs below the game it’s trying to emulate. Firstly, the core gameplay just isn’t there. I read that Beat Games had a working version of Beat Saber up and running within a few weeks of coming up with the concept. They then spent the next 2 years polishing and polishing that essential ‘feel’ of slicing through each block until it just felt right and, crucially, was fun and satisfying. The reverse is the case with Music Escape. There’s hardly any visual or sound feedback to slicing through its spheres. Often, it’s not even clear if you hit a sphere or not. It’s actually remarkable how empty and boring a rhythm game plays when this critical gameplay mechanic doesn’t feel right.

Compounding this problem are lacklustre visuals and terrible performance. The visuals look flat, garish and on the Index (which is listed as being natively supported but isn’t really) foggy and smudged, like someone has rubbed Vaseline over each eyepiece before you play. More subjectively, there’s this odd tonal imbalance to everything that I really didn’t like. In the practice mode, which is a pure copy of Beat Saber, the stage is, like Beat Saber, a sort of techno club inspired environment with flashing lights and lasers. Then in the battle mode (more on this below), you’re in a carnival for some unknown reason, which is very cartoony in its look and feel. It’s jarring and also highlights that there’s only two different (very different!) environments in the whole game! You will get tired of both, very quickly. More damningly though, particularly for this type of game, the performance is terrible. I was playing on a GTX 1080 which has no problems smoothly playing Boneworks, Lone Echo and Fallout at pretty high settings, but Music Escape would consistently chug to almost unplayable levels. Given how simple and plain the visuals are, this is just bizarre. There are no in-game graphics settings so there’s a nothing you can tweak in game here to improve performance. 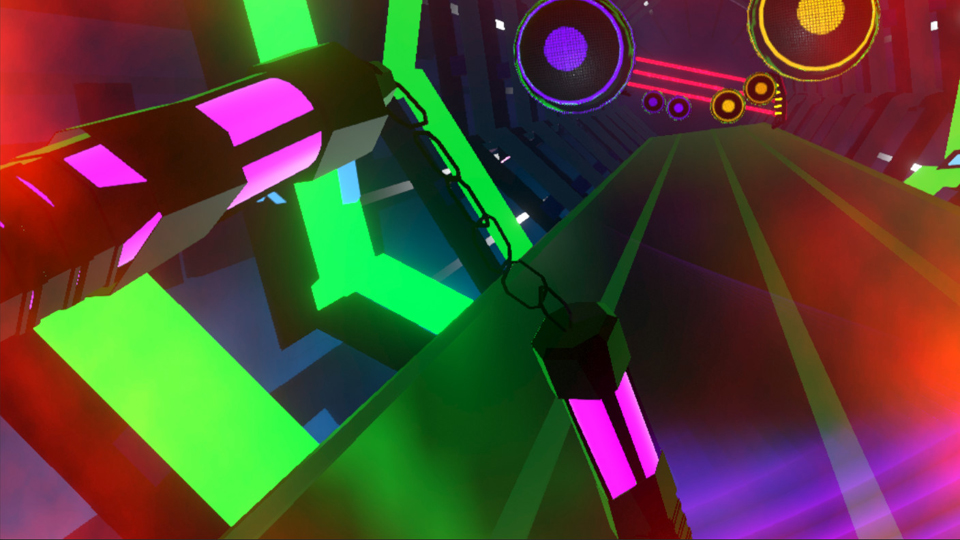 The nunchuks are kinds cool!

Music Escape’s only innovations are its introduction of a battle mode and two new weapons alongside the standard light sabres. The idea behind the battle mode is that it introduces enemies to hack and slash in-time with the music rather than just hitting lifeless blocks. In terms of an idea this is a good one and I can imagine a game where this would be very cool and let you live out some Star Wars-esque power fantasy. Unfortunately, the execution here just doesn’t work. The game flings weird teddy bear enemies at you in huge bunches (even on the lower difficulty levels) and rather than taking big swings at each enemy as if you were some sort of cool techno samurai warrior you end up just waggling your weapons in a mess of melee as teddy bears confusingly pile up in front of you and you attempt to stay in time with the music. There’s no poise or elegance to this mode, and no accuracy to the hacking and slashing. I think for this to work the core gameplay would need to be changed so that it really feels like each sword swipe is relevant and doing damage rather than the enemies just being re-skinned shapes. The addition of two extra weapons also sounds good on paper but in reality, doesn’t add that much. The nunchuks are well animated and are fun to use for 30 seconds but they’re far too wild and unpredictable to use if you’re trying to excel at the game. The claws look good but are functionally exactly the same as the sabres and so their addition is purely cosmetic.

Does Music Escape have any redeeming qualities? Well, as of launch, there’s 15 tracks and, if you’re into this type of EDM, they’re not bad. It’s a fairly generous offering when other game VR rhythm games have launched with less than 10. I would say though that some of the track are very short and if you’re not into this sort of EDM these tracks won’t do anything to change your mind. 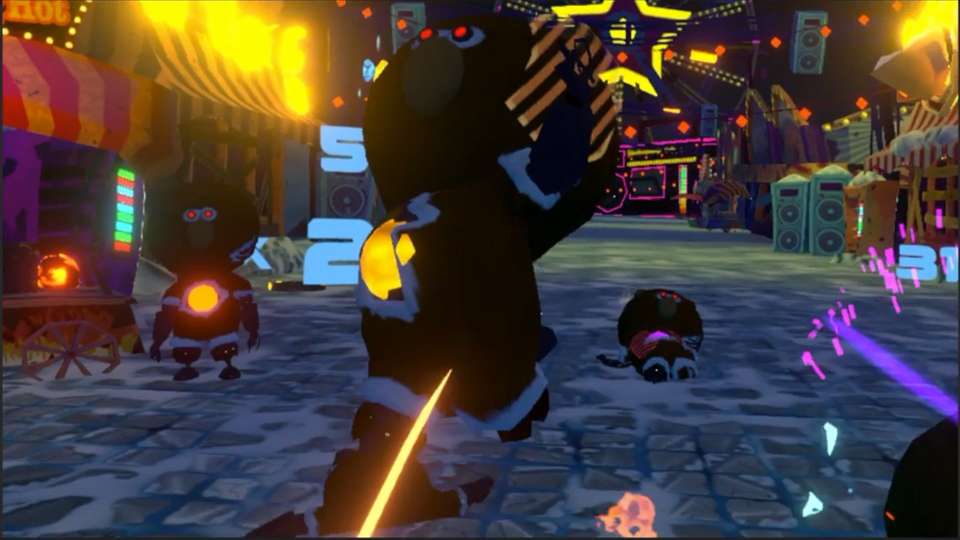 The brutal fact of the matter is that Music Escape offers a pale imitation of one of VR’s best titles and while it tries to introduce some new elements they don’t work. I just didn’t have any fun with this game and there are times when performance is so bad it’s barely playable without suffering a major migraine. When you have so many other, better, options out there in this genre you would not only be wasting your money with this, but also your time.

What would I expect to pay? This game costs £15.49! Even at a third of that price this wouldn’t be worth it but at the same price as the best titles in this genre, and games that offer a far more fun and accomplished overall package, I can only warn you off buying this. If you want something like Music Escape, then check out Beat Saber, Audica or Pistol Whip.

2049VR provided The VR Grid with a press code for this title and, regardless of this review, we thank them for that!