So after playing this game, I realized that the life of everyone’s favorite jumping plumber might be a little more stressful than I realized.  Downloaded from the Oculus store for $5.79 this game utilizes super simple controls to give you a harrowing experience.  Those that are afraid of heights might want to stay away as some of the later levels even had myself getting dizzy…but I love that!!! 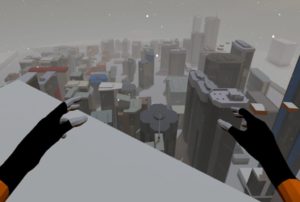 You can jump on every building you can see…so awesome!!

Using a visual style seen in other games like Land’s End or Drift, this game utilizes minimal textures and details to create large cities for you to jump around in.  Everything is crisp and clean and you even have arms which is great, but no body so looking down is a little odd.  Taking place over 5 levels (plus a tutorial) you are placed in different cities with different color compositions and other ambient effects such as snow or rain.  These little effects add a nice touch to the game, especially because they look really good.  The heights you attain in this game are a little jarring and as jumps become more harrowing, a sense of dread at missing them will fill your chest, but in a fun way.  Added to that are some light techno tracks that fit perfectly with the feel of the game.  There are no real sound effects to speak of, but that doesn’t hurt this game.

Requiring a Bluetooth controller, you jump from building to building, or platform to platform, to get to each levels objective.  Each course offers a PAR jump count and times you as well, so depending on how well you do, you may want to come back to a level just to prove yourself.  Jumping is very floaty which works for the most part, but later levels require a little more precision landing and the floatiness of your character, even on the ground, makes these jumps and landings challenging.  If you touch the ground (designated by a certain color) you must start from the beginning of the level.  That becomes a pain the further you progress, but deaths don’t feel cheap but rather force you learn from your mistakes and make you want to try again.  You can also rotate your view with the trigger buttons, so if you’re lazy like myself, you can play this on a couch just fine.

Jumping in a winter wonderland!!!

This game is a gem, even though it is kind of short.  Jumps feel real, and so does falling…it’s great! Added to that is a real sense of accomplishment at beating each and every level.  Looks good, sounds good, feels good…hard to ask anything more of a video game, but as I said previously, unless you’re looking to conquer your fear of heights, this game may not be for the faint of heart, but if you enjoy that feeling you get when an elevator goes down, then buy this game, it’s a blast!