Gunjack is a turret shooter that takes place in the EVE Universe and has you defending your ship/yourself against the hordes of enemies and obstacles hurling toward you.  Downloaded from the Gear VR store for $11.99 and the PS Store for $9.99 is an almost identical experience on both platforms. 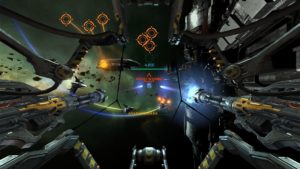 On the Gear this is impressive, on PSVR…not so much!

The presentation is beautiful and so far one of the nicest looking games I’ve seen in mobile VR.  The Menu/Hanger screen is nice enough to look at and the visuals themselves are no slouch on the Gear either.  Ships are detailed as are the other obstacles in your path and your weapons and HUD to a nice job of looking as they should  Also, while some backgrounds, like rotating planets, move and add to the realism; others are still images which become increasingly dull to look at, especially given how many time backgrounds repeat themselves. All of this is ramped up in PSVR, but not to the extent you might think.  Enemies are almost identical and some back grounds have been improved, others are still motionless wallpapers and besides a few updated effects the game looks the same.  Considering the power behind the PS4, that is disappointing.

Audio also shines (with headphones) with top notch quality all over the place.  Intro video and Hanger Bay/Menu audio add to the feeling that you are in this Universe.  Guns and explosions pop as do the rest of the effects in the game.  What shines here in the Gear is amplified in PSVR.  What pops in the Gear explodes in PS and the audio effects and music sound crystal clear and amplified which is odd considering the lack of attention to improving the graphics, but still appreciated. 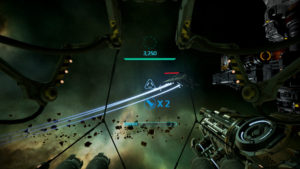 You are gonna see the backgrounds repeat themselves more than you would like!

Game play is identical on both, though the Gear does not require a controller, but is recommended.  Look around, shoot, reload, pick up power ups kill baddies.  Gunjack plays like any other turret shooter as wave after wave of enemies slowly get more difficult, but never too hard.  With 16 relatively short levels it won’t take you too long to beat this game and the only real reason to replay levels in to get the not so elusive 3 stars that every mobile game employs.

If you own either copy of the game there is no reason to purchase on another platform, it’s the same game.  With that said the presentation shines on the Gear, but is taken down a notch on the PS, especially next to Eve: Valkyrie, a full space combat shooter available currently.  Still, if you are into turret shooters, you could do much worse than Gunjack.

What would I pay? $7US seems a little more appropriate.  It’s nitpicky but the content here gets pretty repetitious and that includes enemy types and levels.  Still, for a budget title you could to worse.