Sometimes a game comes out of nowhere and just kind of wow’s you!  In Death is just that and is an FPS Roguelike that seems to me a merging of the Persistence, Trickster VR and Dark Souls, only taking place in the procedurally generated medieval after-life populated with knights, monks, demons and a host of other baddies.  Your task is simple, dispatch as many enemies as you can, getting more powerful in the process to make it to the end game boss and do it all in one life! 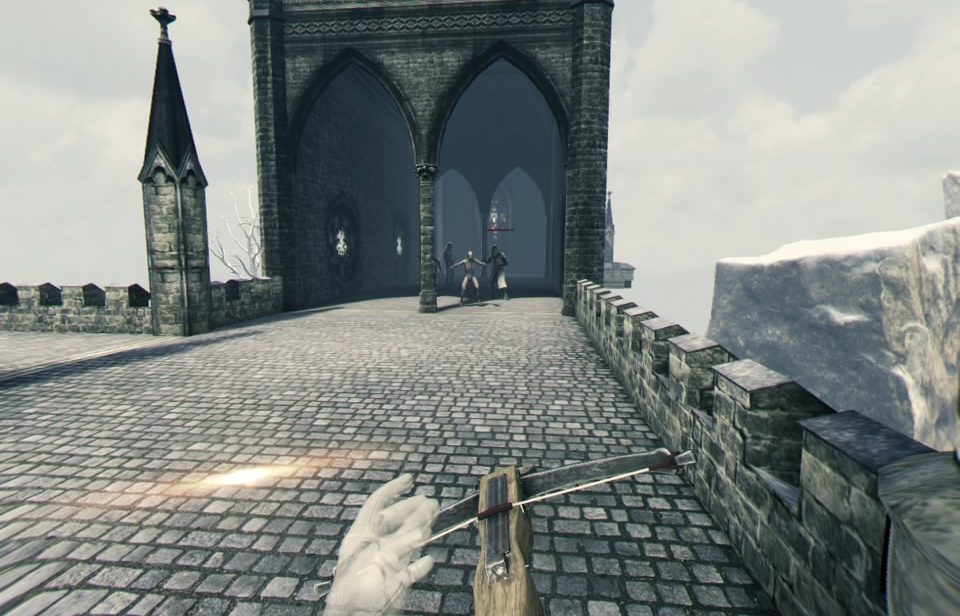 Range is your friend

In Death utilizes both the Moves and DS4 controllers and I much preferred the DS4 as it just offered a little more freedom of movement, which I greatly appreciated in the harder sections of the game.  Neither controller is a perfect solution as while the DS4 afforded easier movement, you lose the tracking of the Moves, which I found to be more accurate with the ranged weapons at your disposal.  There are a few options available including free motion or teleport along with an adjustment for how many degrees you click turn, which is appreciated but I would love to see smooth turning as a comfort option.  Once in the game you are armed with a bow or crossbow and leave the starting area, called the Sanctuary, shooting down anything that comes your way.  Walking is a little on the slow side, but thankfully you have a special teleport arrow that will move you to wherever you shoot it allowing you traverse a ton of space in a quick amount of time, even bypassing portions of the levels should you choose.  Relieving these poor souls of their precious life essence rewards you with gold that can be spent at way stations in between stages to replenish lost health or buy special arrows to more easily dispatch your foes.  You can take a few hits, as indicated by a health bar on your weapon of choice but as health is precious it’s in your best interest to avoid taking any damage.  You are also armed with a shield, which I admittedly forgot about for a bulk of my play but is greatly needed when the games difficulty ramps up, and to get stronger you need to complete achievements listed at the beginning of every play.  The thing with that is the stronger you get, the harder the game gets with more challenging enemies spawning to take you out. 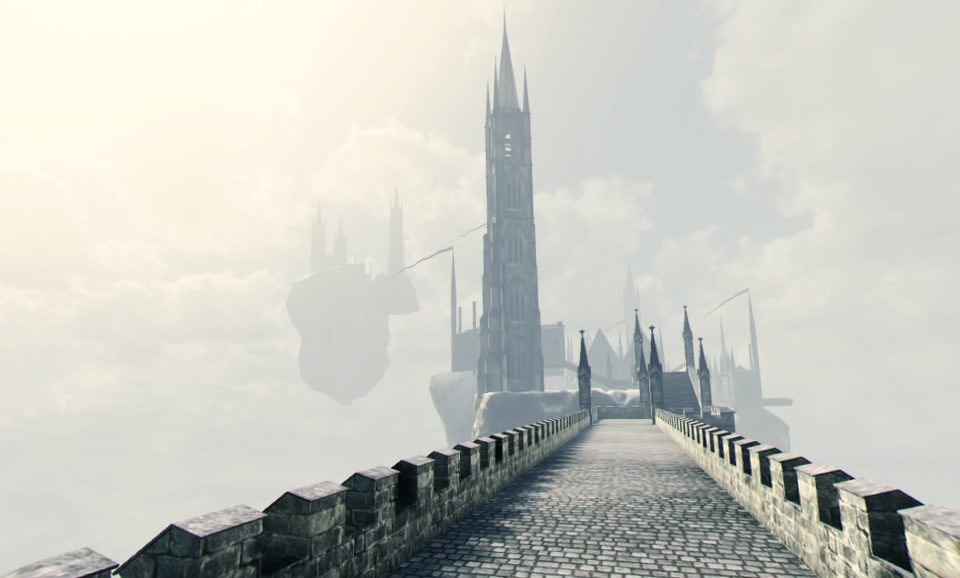 It really looks this good in the headset!

In Death looks really good, and while the overall game may look a little drab and repetitive, it’s clear the team at Solfar took their time refining what is offered here.  The main level theme looks very stark with it’s grey castle walls and rooms seemingly floating above ground on islands, reminiscent of Trickster VR, which does look a tad off.  That said, once you are inside traversing the halls and walkways, you’ll soon forget about that minor visual shortcoming. Enemies look great and while each only comes in a singular model, maybe with a shield or different colored tunic, they all animate beautifully.  Even after hours of play, I’m still impressed at the physics at play as arrow after arrow rained down upon my targets with them reacting accordingly falling down in a heap only to watch their souls float on to oblivion.  While the medieval castle themes level stays the same throughout the game there are a few other areas accessed by portals which carry much darker tones and new setting elements like lava pits or massive scale cathedrals.  Not one area or object exudes any kind of happiness and even as you progress further through the levels, everything just looks and feels more dire and no matter what element you choose to scrutinize, the overall look of the game make this one of the better games on the system with almost no jaggies to speak of, yet still containing a very crisp and clean look.

This is an odd mixing of game types and visuals and fitting with that theme is the audio.  The combat and sound effects are relatively standard with enemies making grunting and groaning noises when they are nearby, though I noticed these sounds tended to be ambient, not really 3D.  With that said there are some great 3D audio effects as enemies get close or when arrows fly past your head making for some exhilarating moments.  What is most striking is the soundtrack, which is a collection of gothic/gospel songs that just shouldn’t be in a FPS game like this and yet here they are…and they fit perfectly with the somber and thrilling tones of the game.  It’s hard to explain, but when the looked as a package, the presentation in In Death offers up something I have never experienced before in video games. 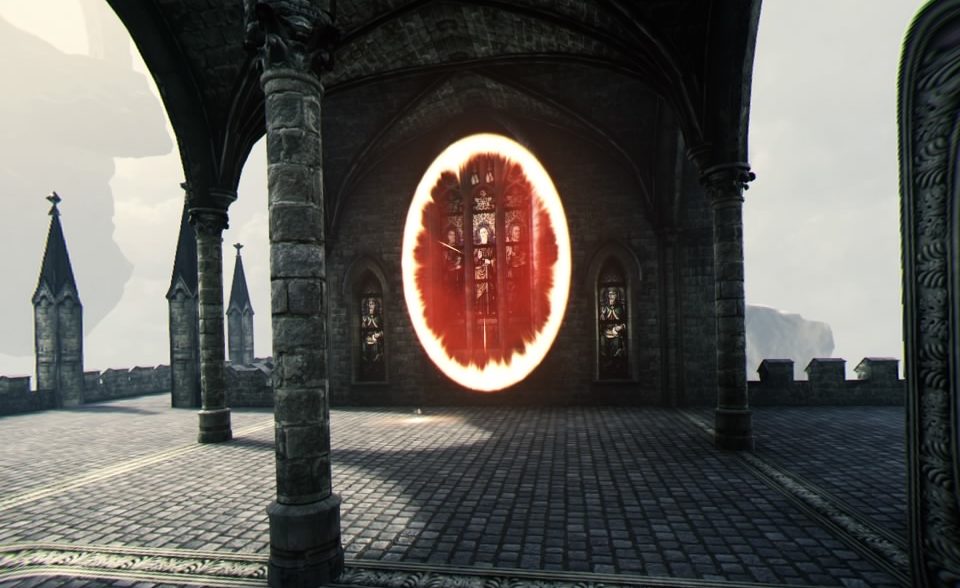 As this is a rogue-like you will be playing the same sections over and over but as each death changes up the stage layout, every new start feels fresh.  As you level up and unlock new abilities for yourself (mostly in the form of damage modifiers) so too do the enemies. Initially I was only fighting Templar Knights and robe wearing archers and thought, is this it? I wasn’t focused on getting the achievements, which the game could do a little better in explaining, and once I did, noticed the spike in difficulty upon each death.  Enemies began to unlock abilities as well like the teleportation, often appearing behind me and new enemies slowly began showing up.  There are bosses in here which are incredibly difficult to defeat, but it never truly felt unfair just extremely challenging and the satisfaction of defeating one of these baddies is its own reward, but the crushing defeat when you make it that far only to lose is equally maddening.

So, as I said, neither controller method is perfect with each carrying a few oddities.  I hated moving with the Moves, and in tough situations I succumbed every time to its limitations with the short teleportation shard ruining my rhythm in tough battles.  With the Moves I also disliked the feel of crossbow reloading and much preferred the easier button press reload option on the DS4.  With the DS4 however, I found aiming to be a little more tricky as it’s just harder to properly line up a shot and what is much more noticeable with the DS4 is that when you reload, for a brief moment, the game locks your weapon in place, but if you move your controller in that time, your positioning in game no longer matches the controller.  A quick shake fixes that, but it did annoy me throughout my playthrough.  Enemies are also only triggered by getting to close to them or hitting them with an arrow, making them aggressive toward you, which does feel a little cheap sometimes (in your favor) but is once again balanced out later in the game by the number of enemies you may face at one time and when they sneak up behind you. The goal is to unlock achievements, but after you leave the starting area, there is no way to view them in-game until you die so I guess the goal is to pick a few to focus on before you start killing everything but I would love the option to view these while playing, especially in deep runs where you know you could be making some mad progress toward leveling up. 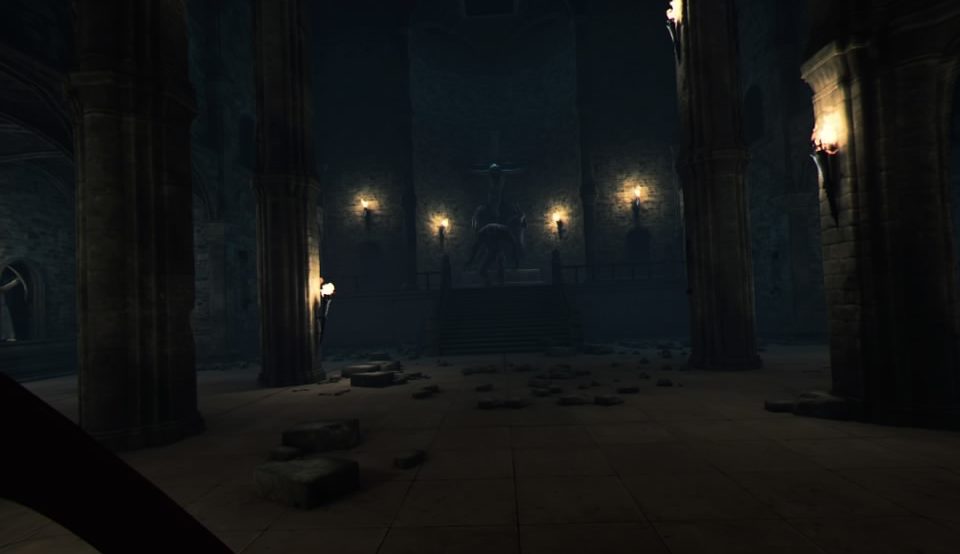 This guy is a pain in the ass.

In Death is…great!  I think I’ve logged in a paltry 5 hours or so and I’m hooked. The game may look a little redundant if you aren’t playing it, but the constant progression and mix up in levels and enemies gives this game a tonne of replayability.  The one last item I will mention is the “asynchronous multiplayer” which allows you to send a map seed to your friends and see who can get the higher score, which is a nice little addition, though one I didn’t get a chance to delve into.  Throw in the stellar gothic presentation and some fantastic VR visuals and this is a delight as the game constantly pushes you to get better with very well-balanced difficulty that has you feeling more powerful with each Death but increases the challenge, so you never truly feel safe, making for an overall exhilarating experience.

What would I pay? The $30 price point on this is perfect.  There is a ton of value here and I’m talking about content and fun factor.  Even from the get-go you feel almost overpowered when compared to the enemies you’ll face, yet death always seems to find you urging you to keep pushing forward just to show this game that you are the boss.  This is addictive, fun, immersive and one of the better-looking VR titles out there.  If anything I’ve said interests you, pick this game up!

Solfar Studios provided The VR Grid with a code for this title and, regardless of this review, we thank them for that.