If you played Herobound First Steps (see my review here) or Herobound Gladiators (review here) you will be instantly familiar with the mechanics and game play of this franchise.  However, unlike its predecessor, this is a fully fleshed out game and a way better experience.  What was lacking in the 1st game has been inserted here to great compliment.   The story is a by the numbers tale about bad spirits attacking good spirits and needing a champion to unite them all in stopping all the bad stuff.  It’s nothing exciting, but does it’s job at setting up the story and world you are adventuring in. 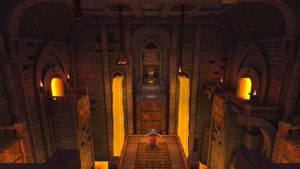 Considering the platform, I find these visuals amazing at times!!

The visuals in this game, while not mind blowing, are super polished and a pleasure to look at.  The cartoonish nature of the visuals lends itself well to the limitations of the tech and are still improved upon from the first game with plenty more differentiation in environments and enemies.   Animations are fluid and feel natural as you control your little goblin hero through dungeons representing different elements (fire, water…) with enemies representative of those elements.  The dungeons themselves are a page out of the Zelda book, with each door you enter leading to a new room, some small and some quite large.  Puzzles abound at every corner and as the game progresses and you unlock new skills and abilities, they get harder, much harder.  The difficulty in the puzzles is a dramatic improvement over its predecessor and very much welcome as the challenge they provide, and the satisfaction of solving them, makes this game a joy. Sound on the other hand doesn’t stand out, it’s there, it does the job but having full voice acting for what little speech there is would be preferred over the Simlish you hear throughout the game.

Controls are simple, requiring a gamepad to navigate around the maps.  Combat is a little bit of a button masher, especially at the beginning of the game, but as you progress and unlock new weapons and abilities the fight dynamics improve as certain enemies become susceptible to different weapons and attacks.   Puzzles range from super simple to ridiculously complex yet always feel they are solvable with a little patience and skill.  How this works in VR is that you are a mounted camera in every room with the ability to look 360 degrees around you, although all the action takes place @ 180 degrees in front of you for the most part.  I did find that the camera view did hinder some jumping puzzles, especially the further away you were from the camera, nothing game breaking, but the few accidental deaths were annoying.  Besides that issue, controls are fluid and even looking around the rooms revealed some impressive visuals giving a lot of depth to the environments. 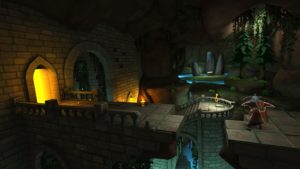 That key is so close, yet so very far away

If you are a fan of Zelda RPG’s, pick this up.  It is a fully fleshed out game making use of VR in a visually appealing way that many other experiences don’t utilize.  At roughly $12, it’s worth every penny.  Giving you hours classic role playing fun with a new VR spin. If you were turned off by the previous installments of this game for the lack of content, check this one out, it’s a great and easily worth the price of admission.