Being a big Manchester United fan (I have followed for the for 35 years) and watching them play over the last few matches, I have come to the conclusion that they need more of a killer instinct in front of goal. Shots are flying wayward and headers not finding their intended target, but instead making the spectator in row K attempt to catch the ball. Not a lot can be achieved with the kicking, but with the heading I have an ideal location where the strikers can gain confidence and skill and hopefully get back to winning ways. The location in question is the Football Improvement Centre. 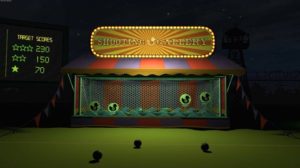 Lessons get fun and unusual in their variety.

Which leads us nicely to Headmaster, a game where you literally must use your head. You play as one such Striker whose goal scoring abilities seems to have gone awry and as such has developed a fear of goalkeepers! Your club has had enough and have sent you to the Football Improvement Centre to get your mojo back and your freedom, as the setting is very similar to a state prison.

What follows is a variety of lessons, leading up to a final exam at the end of each section before moving on to the next section. At the end of each lesson you are rewarded up to 3 stars depending on how well you scored. A set number of stars are then required for entry into the exam. Not enough stars and you have to replay previous lessons to improve on your prior scores.

The scenes are set up by two gents who communicate through loudspeakers on a very spooky lit football match at night surrounded by barb wire fences and guard towers. It does create a eerie atmosphere but it works well for the prison type theme. The basic premise is that a set number of balls are launched at you from differing angles and you must head them back to score goals, hit targets for points and generally a lot of other objects. Having played a lot of soccer in my youth, until I got to the age where my knees protested, the heading mechanic feels spot on with no camera tracking issues at all. It’s technical feat that the heading action, which is pivotal to gameplay, is natural and fun. 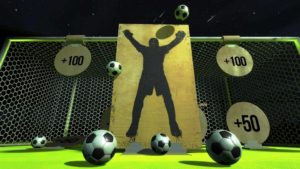 A game where you literally have to use your head!

The lessons start off basic and rudimentary, but after a while the games developers crank up the variety and wackiness and their creativity shines in making a simple achievement in heading a ball never tiresome. Having said that, it’s not just balls which come your way but inanimate objects and giant beach balls. The developers are to be commended for creating an atmosphere that is dark and surreal, and one which gives this game a unique identity. There has been a recent software update which has taken advantage of the PS4 Pro and has sharpened up the visuals, particularly with objects in the distance, which are noticeably crisper.

The game does away with any controller and so you only get to use your head. Either by directing those balls or by looking to select options. It’s very intuitive, simple and world great.

As the lessons get harder, frustrations do start to set in as your required stars for the exam get more and more strict and having to replay a lot of the earlier lessons is essential. It’s a system which is not very forgiving towards the latter end of the game although the recent software update has rectified this somewhat. It’s also a shame you can’t use any other body part, which would have only added to the fun.

Along with the action, there is a small story that develops as you progress and to complement the fun aspect of the game there is a good sense of humour, which comes in the form of the games narrative and the notes that you are frequently given. Headmasters main appeal is its fun factor and the enjoyment gained by both the player and any viewers watching on screen. It’s an addictive title, offering that ‘just one more go’ before you realize how much time has elapsed and then wondering why afterwards your neck muscles feel strangely tight. 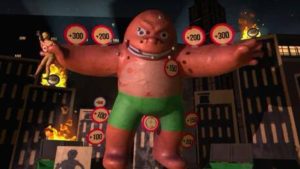 Go up against a giant monkey in one of the 9 party games.

The software update has included nine party games. These are multiplayer games between 2 to 6 players and are a great additional bonus for extra laughs. If you think the main story lessons are on the wacky side, then the developers have gone to town and cranked up the wackiness meter. The highlights of the party games include a gigantic dartboard with balls surrounded by darts being launched at you, finding yourself up against a giant Monkey, bowling a set in a disco and my personal favorite, beer pong, with mini ping pong balls being shot towards you. It’s all great fun, and high scores are recorded for family and friend feuds.

For a PSVR launch title it’s an ideal experience for newcomers to VR. It’s a game that doesn’t require the player to be a football fan, and offers solid entertainment and  good deal of replayability as well as exercising those neck muscles.

What would I pay? £15.99 is an ideal price point which offers a good deal of single and multi-user play, to replay levels and experience the fun of heading balls.