MyDearest Inc has made a name for themselves with their Chronos series of Interactive VR novels which, at his point, is not really an accurate description for how the series has evolved.  While the first game, Tokyo Chronos, offered minimal gameplay in favor of a narrative heavy story, Altdeus opted for more gaming elements with DYSCHRONIA continuing those advancements with even more interaction with the world around you, turning this into an amalgamation of interactive novel and a more traditional VR title. 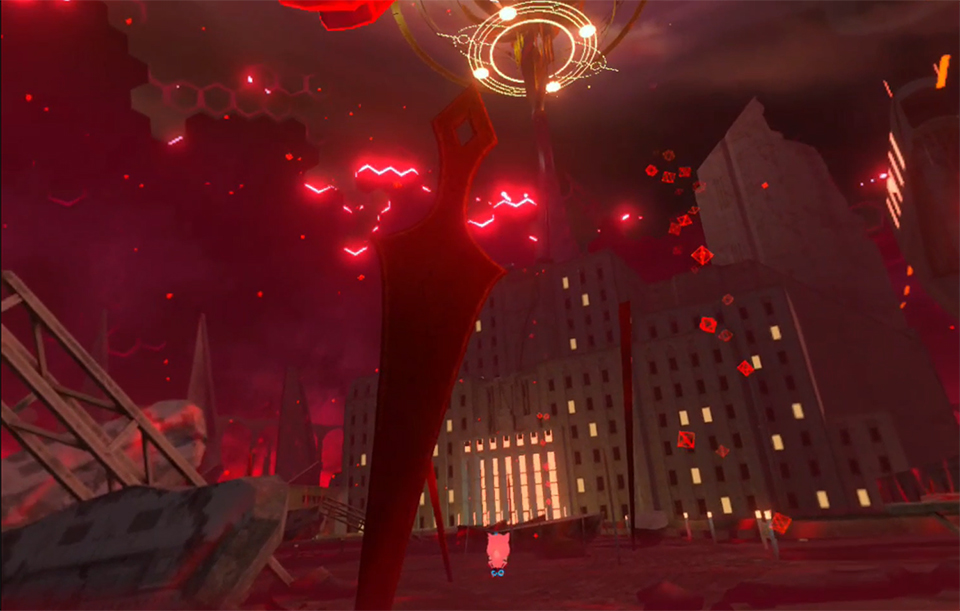 The Chronos games have had loose ties to each other with each behaving as their own individual story, taking place hundreds of years apart with the last 2 titles occuring in different dystopian futures. You play as Hal Sion, a recently promoted Special Supervisor in the artificial marine City of Astrum Close where, thanks to dream technology, crime has been reduced to near zero percent.  Unfortunately, the founder of the city, Professor Albert Rumford has been murdered and it’s up to you as the lead investigator, to find the culprit.   What ensues is a series of stationary conversations and exploration of the city using tools to examine your surroundings while hopping in and out of the dream world and also revisiting both yours and others memories. 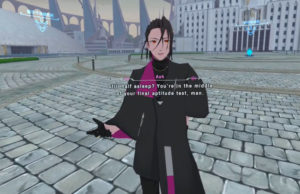 Talking is the name of the game here.

The Interactive Novel is, in my opinion, a bit of an odd ball one for VR as, typically, the VR user does little more than stand or sit while conversations happen around and to them.  It’s a genre with an acquired taste though Dyschronia takes the series to its most interactive offering up plenty of ways to experience the world around you.  This is still very conversation heavy, but when not chatting it up you’ll be grabbing and inspecting items, traveling about the city using a variety of comfort options, transporting yourself to the dream world (called Augmented Dreaming) where you can talk to city folk and ease their worries, experience & manipulate key memories attached to items found on your investigations, link clues and items together to unravel the murder and a few more mechanics that I’ll leave a mystery for those who like surprises and while that all sounds like a lot of game, almost of none of it is engaging and in most cases, interferes with the plot causing it to move at a snails pace. 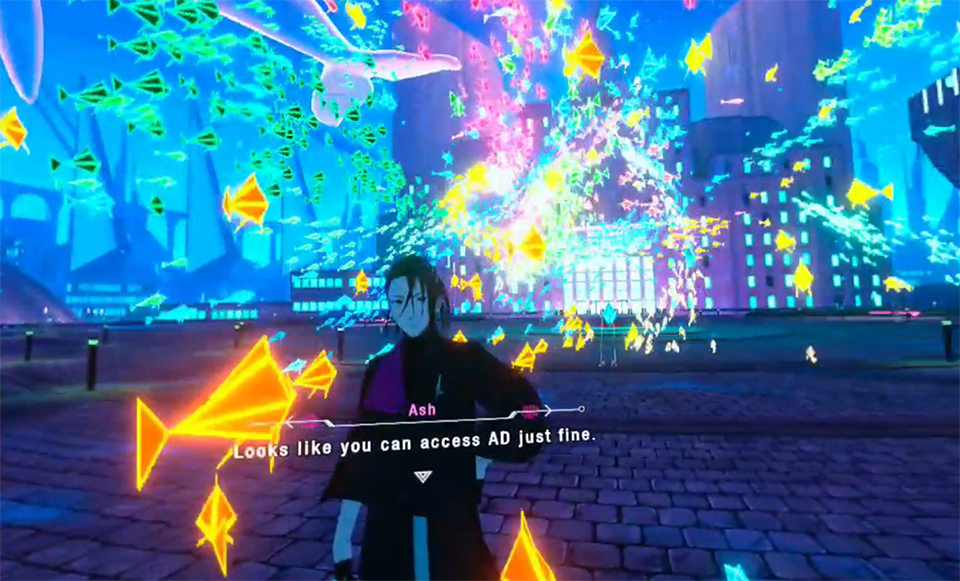 The dream world is initially quite striking!

The city is broken up into smaller sections all separated by loading screens with some areas being very small, like a laboratory or foyer to larger areas like a hotel and the city center. As the game requires you to find as many clues as possible to solve the crime, the need to engage with nearly everyone and everything, both in the dream world and out, which gets old as tidbits of info are mired in extensive and oftentimes useless or redundant dialogue.  There are choices that can be made and clues that can be missed that do affect the outcome of the story with the game still behaving in relatively linear fashion as it almost always directs you where to go next.  Items that allow you to revisit a memory must be held in your left hand to trigger that trip through time which shows the same animation every time you visit the past and while it does look slick, after about the 10th time of seeing it, it felt unnecessary, and you’ll see it plenty more times than that.  In fact, how the game transitions from one scene to the next or even in the middle of Hal just talking to himself is immersion breaking as it seems like every few seconds you could be treated to a black screen with a loading reticle and while that screen typically takes no more than a few seconds to load, it’s shocking just how often it pops up.  Doubling down on that loss of immersion is the game’s constant desire to remove your controls as events happen around you, be it something dramatic like a shooting or as mundane as character deciding to talk.  Areas needing thorough inspection can be awkward to examine as accidentally touching interactive items will trigger the same audio clip again and again with the game doing a poor job of letting you touch these items, creating a holographic hand that you can slide around the item in question, though more often than not, that’s all you can do unless it’s a door of some type. You can talk to your AI companion Lily, who helps flesh out some of your discoveries with a cumbersome investigation window detailing all your findings, items & suspects that need to be linked together to discover key details in unravelling the plot.  It’s a game that tries very hard to be in depth and when I put clues together to make a discovery, I felt rewarded, but the convoluted systems to do that are nothing short of frustrating. 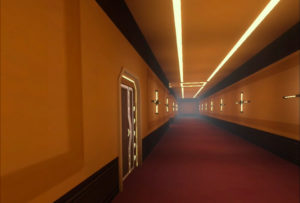 Many of the environments lack much in the way of finer details.

What has always impressed me with the Chronos titles is the 3D modelling of the Manga style characters and that remains to be the case here with the core cast as well as a few of the environments.  The opening sequence is an impressive display of destruction and some of the smaller rooms you visit are highly detailed but more often than not this world can seem completely devoid of detail and life which is explained away thanks to a lockdown due to the murder.  When I walked through those larger areas with minimal textures, flat backgrounds and no one around, it felt artificially empty and lacked anything of interest.  The dream world on the other hand has hundreds of digital fish and other seal life swimming in the skies around you and is initially quite impressive, but as the game went on, visiting the dream world became only a chore as it never really changes up too much. The voice work on the other hand is perfectly fine for the genre with the actors all playing the roles quite well though traditional anime tropes will pop-up with one notable sour point being Lily, who is far and away the most annoying character in not just the game, but the entire series. I found here inflection and demeanour to be absolutely grating and it sucks that she is with you for a bulk of the story.  The soundtrack also feels disjointed at times, not quite fitting the action (or lack thereof) and comes off as if the tracks have been recycled from a previous game and while I have no idea if there is any merit to that statement, it doesn’t change the fact that more often than not, the music felt at odds with the narrative. 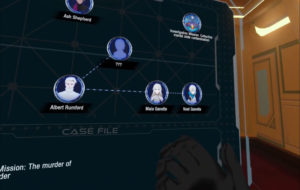 As you unravel clues, they’ll be added to your codex.

I have been whining a lot about Dyschronia up to this point with a bulk of these issues occurring much more in the 1st 2/3 of the game with the final act or so tying things up nicely considering there are 2 more episodes to come.  There are a few puzzles sprinkled throughout which I found both challenging and rewarding, a late game stealth section is fairly intense and as the clues start to form the story, it’s clear a lot of attention and detail went into the narrative.  The ability to manipulate the past and change events previously set in stone is fun and returning to the real world to not only see the effects of your changes but unlock new choices because of your actions is a clever mechanic to add layers that disguise just how linear this can be at times.  Hal’s memories before 3 years earlier are foggy at best so as you uncover more about the murder, more is revealed about Hal’s past as well, with new mysteries being expanded upon that do make me curious about what’s to follow in the next episodes. 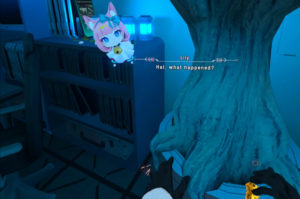 There is an interesting & complex sci-fi story here, but I feel like over half of this game is mired in immersion breaking loading screens & loss of character control on top of mundane and shallow VR interactions that I think many will have a hard time getting through.  The Interactive VR Fiction genre has never been known for excitement, but I feel like the desire to add more game mechanics to this series has, in my opinion, hurt the way the story unfolds more than it helps, burdening the narrative with unnecessary and annoying VR interactions.

What would I pay? This first episode is $20 and offers roughly 6 hours of gameplay and if you enjoyed the previous Chronos games, you’ll probably dig this too.   For those new to the franchise, I can’t help but think that when they are all released, the price will be cheaper as a package deal and given just how annoyed I was with a bulk of this first part, as much as I want to see where the story goes, I’m not sure if I, or you, can handle just how frustrating and unimmersive this can be at times…and Lily’s English dub is also piercingly tiresome.

MyDearest Inc provided The VR GRid with a press code for this title and, regardless of this review, we thank them for that!